I posted this in another group. I'm 47 years old, but my discussion topic is more relevant to older audiences:

I've seen Peak Oil videos that state that modern medications are made with petrochemicals.

The implication seems to be that once the SHTF there will be no more medications – except maybe for what you grow yourself.

That didn't bother me until the last few days when I learned that I'll be taking one medication on a long-term basis. The alternative is horrible pain at the very least.

I'm going to stock up with about 6 months worth of my medication. I may try to use some herbal alternatives too. But this is a topic that others must be dealing with. Others must have done some research on what is likely to happen to the pharmaceutical industry as things go downhill. Or at least you may have thought about how you'll handle it when it comes.

Jeff, I'm glad you brought this up on PP. This certified elder is taking 2 prescription pain meds concurrently, so the question of what to do for pain relief when the pharmaceutical supply chains fail (for whatever reason), is certainly one I've pondered. Beyond stockpiling meds, I didn't have any other ideas… before today.

What happened today? I received this book I'd ordered: "The Knowledge," subtitled "How to Rebuild Our World From Scratch." Before ordering it, I'd already read a downloaded sample on my Kindle, which was sufficient to convince me of the soundness of the author's impressive credentials and approach. For more info, go to: http://www.amazon.com/Knowledge-How-Rebuild-World-Scratch/dp/159420523X/ref=sr_1_1

I had yet to open the book at the time I came across your post. But prompted by your dilemma, I found pain relief in the book's index, and felt rewarded by the author's explanations for how various drugs are derivable from plants, including analgesics (e.g., willow bark for salicylic acid, chillis for capsaicin, mint for menthol, and poppies for opium)! I don't know about you, but I'm now more optimistic with regards to post-SHTF pain relief than I was before.

From what I've read so far, I'd recommend your consideration of this book, and not just for the content on pain relief! As an excerpt from the front flap says: "In The Knowledge, the brilliant British scientist Lewis Dartnell synthesizes a staggering amount of information into nothing less than a step-by-step guide to jump-starting modern technological civilization." I don't think you – or other PPers – will be disappointed.

Jeff, what other post-SHTF challenges might you be stumped by? Please post! You might be surprised by the potential solutions other PPers could point you to 🙂 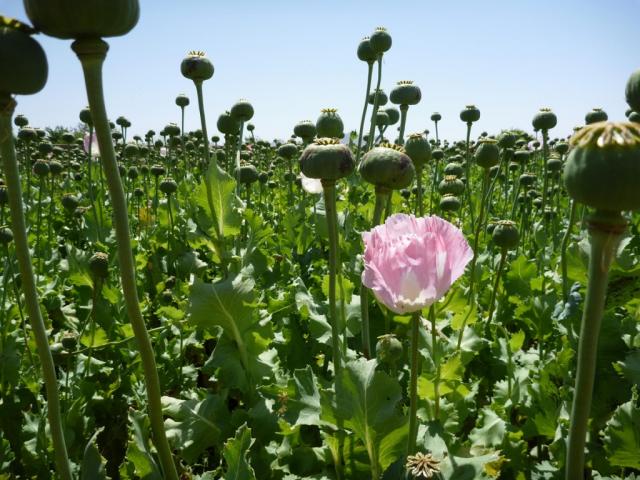 All narcotics are derived from, or are synthesized modifications of compounds that come from poppies. I might learn how to grow them.  The chance of addiction is quite high in a subset of people, however.

DEA has feelings about using these plants for non-ornamental use but of course laws change so we shall see. Here are some cases but I cannot find the actual legislation.

Please know we are already somewhat in the SHTF stage when it comes to some medication shortages:

Thanks for your comments.

Terry, the book you recommend (The Knowledge) is now on my desk. I'll certainly be reading the chapter on medicine.

I was purposely vague in my original post. General comments are probably the best to start a thread of comments. But since the ball is rolling, let me get a little more specific about my own concern.

The medication that I'm taking is Flomax. You see it on TV ads featuring (old) men having a good time. For some it is just a capsule that keeps you from having to pee every 2 hours. Others of us need it in a more serious way. The fact that they advertise it might be a plus for me – it is probably available in large quantities.

The herbal alternative is saw palmetto root. I haven't researched that yet, but I doubt that it grows in the north where I live. And, in a lot of cases – including mine – I'm thinking western medicine is the preferred way to go if it is available.

Anyway, if anybody has anything to add I'd be glad to hear it.

My understanding is that saw palmetto works for some folks I know. It's like other herbal remedies: unless it works ALL the time, physicians are reluctant to suggest it. . Here is how studies seem to think it operates. Other studies found it no more effective than a placebo.

Few side effects or allergic reactions are associated with saw palmetto extract use. The most common are gastrointestinal, some of which may be reduced by taking the extract with food. Use may increase the risk of bleeding or affect sex hormones, and concurrent use of other drugs with similar action should be avoided.

Beta-sitosterol, a chemical present in saw palmetto extract, is chemically similar to cholesterol. High levels of sitosterol concentrations in blood have correlated with increased severity of heart disease in men who previously suffered heart attacks – Wikipedia

Here is it's native range. If you have a climate like the Southeastern USA – the green areas below–you can grow it or maybe in a solarium (sunroom, greenhouse) next to your Meyer Lemon tree.

Saw Palmetto extract only has a shelf life of two years.

In the short run, I'm going to go with western medicine.

Very helpful to know that stuff though.

I'm trying to research whether an adult tricycle might be a good fit for my situation.  our community is poor (& getting poorer) so there's minimal public transportation, which i believe will become less and less available due to funding issues.

my husband and i live on a small farm (in the Pacific Northwest).  we live about 10 miles from the nearest town, which is pretty small.  the roads between our place and town are all 2-lane. i have a friend about 3 to 5 miles away (on the way into town) who sells me produce every week—it would be nice to have a way to get to her place w/o driving every time.  the idea of an adult tricycle appeals because they usually have at least one basket, which could hold the produce i buy from my friend.

given the current world situation (oil situation, contracting economy, etc), i'm trying to come up with alternative transportation ideas, esp those that don't involve gasoline or electricity.  i have vestibular problems which keep me from riding a 2 wheel bike & i'm now in my early 60s.  i realize that eventually bikes/trikes may become obsolete due to their parts.  however, in the nearer future, they may make sense, at least in some situations.

has anyone in this discussion group (or other discussion groups on PP) addressed alternative transportation for seniors/elders who live in the country?  i *really* hope to stay in the country if at all possible; i have concerns about the municipal infrastructure (such as city water and sewer services), as well as their currently rising costs (at least in our area).

seems like as the economic crisis (in my opinion it's a crisis) accelerates, there may be less traffic on the roads, making it a bit safer for people to use bikes.

Any thoughts or ideas about this?

A trike would be very viable for seniors, as long as you could keep it in good repair. My grandfather rode his trike around his small town until a week before he died … at age 96.

I'm a member of The National Association of Scholars (NAS) which seeks to sustain the tradition of reasoned scholarship and civil debate in America’s colleges and universities.  It is well established that college facultties are overwhelmingly liberal in their politics and that they, either deliberately or inadvertently, influence the beliefs and political orientation of students.  Rather than encouraging free inquiry and the non judgmental exchange of ideas, academia is more commonly intolerant and dismissive of conservative opinions.

In March 2015 NAS published a report on Sustainability: Higher Education's New Fundamentalism. True to the current climate in American colleges, faculty has given its total support to Sustainability, as it did with Climate Change.  There is no reasoned consideration given to its enforcement in either monetary terms, the availability of natural resources, the global cooperation of nations, or the civil liberties of our global population.

Although I support the goals of sustainability when willingly adopted by individual citizens who understand the variables in their limited environment, I do not support a global imposition of unproven standards on unwilling citizens.  Civil liberties are more important than the imposition of  standards when SO LITTLE is known of the variables involved in sustainability.  Just as in climate science, little is known about a subject as vast as the climate of planet earth.  We do not know enough about long term sustainability to impose rigid laws on an unwilling public.

My husband was a scientist, a geologist with the USGS, who scoffed at the idea that man knows enough about nature's variables to impose his will on Earth's climate.  The behavior of the sun, the oceans, volcanoes, earthquakes and other natural phenomena are quite unpredictable — as is climate change.

I believe the same is true of global sustainability.  We have neither the knowledge nor the power to enforce a global effort.  We only have the hubris of our academic faculties.   See http://www.nas.org/images/documents/NAS-Sustainability-Digital.pdf for the text of this article.