Has Mike Montagne discovered the holy grail of financial solutions?

First, thank you Chris for helping me to understand that our current monetary system has an inherent flaw that must be fixed before we can ever hope to reassert stability and prosperity.

The huge but subtle problem that Chris mentions is debt, or more specifically, the interest from the debt. As stated in "Crash Course Chapter 8: The Fed – Money Creation" – all dollars are loaned into existence at interest – which is compounded. This has led to an unavoidable and predictable exponential growth in the amount of money that must be created, by more debt, just to service all past debt in the system. The economy has collided with the hard reality of the mathematics. We are like a dog chasing its tail -destined to figure out our dilemma or to expire in the chase.

Few seem to grasp this problem and yet fewer offer any real solutions. Go back to a commodity currency (gold and silver) you say? No, that does nothing to stop the eventual exponential growth of servicing interest from all outstanding debt. The gold notes would surely be more welcome by our creditors than a fiat currency but it does nothing to change the variables in the failed debt-interest equation.

In my research I have found only one lone voice that speaks to the very core of the problem. Mike Montagne’s "Mathematically Perfected Economy" offers a "singular integral solution to 1) inflation and deflation, 2) systemic manipulation of the cost or value of money or property, and 3) inherent, irreversible multiplication of debt in proportion to a circulation."

I urge others to visit Mike’s site to review what he has been saying since at least 1979. I am not smart enough to say he has found the "holy grail" of economic solutions but I am open minded and observant enough to recognize that he is closer than any other remedy I’ve encountered.

Be forewarned that Mike is a prolific writer and the reading is not always easy – but I assure you it is more than worthwhile!

Your comments will be most appreciated.

Mike mathematically proves with his computer model that all economic models based on any form of interest are terminal by default.

We, the people of the world denounce your claim of ownership of the world for it is through fraud, deception and usury that you have made yourself the rulers of humankind. You have committed every evil in your goal for world hegemony and have become drunk with the blood of the innocents.No longer shall we sit idle by allowing your agenda to stay hidden behind the veil. We shall unite with a common purpose and with a common goal to spread the knowledge of your tyranny across the globe and to demand justice until the world is free from the slavery and perdition you have created on this earth.

[quote=DrKrbyLuv]Few seem to grasp this problem and yet fewer offer any real solutions.

In my research I have found only one lone voice that speaks to the very core of the problem. [/quote]

What about Nate’s work at Economic Edge? I thought he has proposed a solution, following the work of Bill Still, “The Secret of Oz.”

He says, “It’s not what backs the money, it’s who controls the quantity”

Let me know your thoughts on this – I’ve read enough of your posts to know that you (and others) have a far greater grasp of this then do I.

I found the site full of waffle, irrelevant pictures and quotes of US presidents — but not a single equation.

Maybe I missed where he explains, models and proofs his theory?

Maybe we’re not speaking apples-to-apples yet. Did you read this? There’s a 6 page outline at the top and then there’s a 28 page longer version below that. While you’re right – I didn’t see many equations, I didn’t see lots of pictures or quotes, either.

I try to read his blog daily, but a lot of times, the info is too technical and goes over my head. I had lunch with guy one day, and he seemd like a pretty sharp guy to me.

Are you reading “Freedom’s Vision”?

Thanks for digging up this old post from 2008.  This is the basis of our financial crisis.

I’ve been a big fan of Mike Montagne as he was the first to open my eyes to the inherent and terminal flaw of interest debt.  The problem is that virtually all of our money is created through debt, and it is extinguished as the principal is repaid; it ceases to exist.  Money, under our debt based system is only temporary – in a way it is a perishable public utility – we have no permanent money.  The interest charges on new debt, unlike the principal, is not created.  Interest obligations must be taken from the existing circulation.

Chris Martenson explains this mathematical certainty as only a great teacher can in “Crash Course #8, The Fed – Money Creation“

“Because our debt-based money system is growing by some percentage continually, it is an exponential system by its very design.  A corollary of this is that the amount of debt in the system will always exceed the amount of money (see chart below).

All of which leads us to the Fourth Key Concept, which is that perpetual expansion is a requirement of modern banking. In fact we can make a rule: Each year, new credit (loans) must be made that at least equal the amount of all the outstanding interest payments that year. Without a continuous expansion of the money supply, past debts would not be able to be serviced, and defaults would ripple through, and possibly destroy, the entire system.  – Dr. Martenson Crash Course #8, The Fed – Money Creation

Back during the early 1980’s, Mike Montagne submitted a mathematical model to the Reagan administration that clearly showed that debt would grow exponentially – it simply could not be sustained.  Below is a graph of his findings: 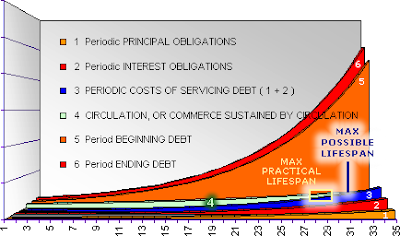 That was 30 years ago, Mike prophetically projected that debt would become unsustainable somewhere around 2009-2012 as the chart above shows.  He could not know then what interest rates might prevail and this important variable affects the calculated end date.  You can download his spreadsheet and see that if the rate of interest grows, the collapse is expedited.

You can also see that by reducing the interest (quanitive easing and zirp) the system may be artificially sustained, at least for awhile.  My personal opinion is that this flaw in design was intended, the international banking cartel that owns and controls the private Federal Reserve wants us to be be in perpetual debt that can never be repaid.  By claiming the future labor and productivity of our nation, we are effectively enslaved.

We find ourselves in a terrible situation – that is that our money supply is solely in the hands of a private and unaccountable group of elite power brokers.  If we are to move forward as a civilization there first must be an awakening, an understanding that our financial system may be a tool of tyranny or the key to our most basic freedoms.  It is time to take back the control of our own money.

Here is a great video of Mike Montagne (after the 3 minute intro):

Looking at that website and watching the first three videos brings me much closer to Tapani’s point of view than yours.   The website is a mess.  It is very hard to read with links all over the place and the narrow paragraphs in two columns.  The video’s seem to spend more time talking about how he has found the perfect economy than explaining just exactly what that is.  He slams Ron Paul’s solutions to the problems we all face and mocks any comparision between Ron Paul and people like Jefferson, but then goes on and imply something like, “Jefferson would have agreed with me”.  As far as I know Ron Paul has never compared himself to Jefferson, only his followers do.  Mr Montagne’s videos and writings make him seem arrogant which is a bit of a turn off for me.   Maybe if I could find out what exactly MPE is, that arrogance may be justified.  Until then I am left with the impression, “Where’s the beef?”.

I know you are a smart guy and have fully thought through this stuff yourself.  Can you point at a quick summary or link to a video that actually explains what he is talking about?  I have probably spent an hour wandering around reading and waching videos but still don’t know exactly what MPE is and how it will work.

He was very early to mathematically document the fatal flaw of our monetary system (exponential growth of debt) and he was correct in identifying interest as a problem.  If you are looking for the “meat” you will find it in his spreadsheets and equations – not in his words.

His alternative, the Mathematically Perfected Economy, is only conceptually explained.  The program is his intellectual property and the equations and variables are guarded as a secret.  If you are looking for those, they aren’t there or weren’t the last time I looked.

He seems to hold some resentment toward many held as monetary experts as they have had little interest or appreciation for his work.  He has also accused some of stealing his ideas.  For example, he got into a spat with Ellen Brown and Steve Zarlinga.

As far as Ron Paul and Austrian economics, I agree with Mike, they are wrong when it comes to financial solutions and alternatives.  I really like Ron Paul’s positions on many things but economics are not one.

Regardless, I think Mike is extremely bright and was ahead of his time by using computer modeling for macroeconomics.  Now, monetary reform is becoming more popular but he seems to be left out.

I wish he would re-do his website as the message seems to be jumbled.  You have to work to find the important stuff and then, invariably, some details are missing.

Ok, yes he is right… and the only way to perpetuate an economy is his way … it would be a flat line on a graph …no up cycles or down…just flat for 10,000 years…if we were computers or robots and lived perfect world… maybe…but we do not!  We live in a mean, unforgiving world of humans dealing with reality …each and every day…!  And we want to better our selves…we want to progress this is a biological imperative…!!!

Here is where fantasy meets reality…here is where his system while is absolutely correct and irrefutable…will not work for biological systems.

The only viable, reasonable system is one the RP Austrians advocate that of ups and downs …not a flat line …but a pulse.  What we are seeing now is not a pulse… but a heart attack. RP solution is far from perfect… but is is good enough … to insure freedom and liberty and an adequate pursuit of happiness.

All biological systems must cycle…(Rest and Grow)  (Live and Die) to get …better (more efficient for the situation…ecology) but never perfect…”live” the more efficiently they cycle the longer they live… and as Dr, Paul teaches us “economics is about Human actions… biological systems.  So you need a lot of little ups and lot of little downs in a cyclic timed system…you also need to allow poor systems to fail so their is progress, reset sometimes too.

Here is the final word… see the system we have now is too hot, will fail very soon,his system is too cold and may never fail… but Dr. Paul’s system is just right for our desire to balance freedom and liberty with our desire to pursue the most happiness…for the longest time.

I do not want to drink from his holy grail…it just cost me too much…but not in interest …just life..