In all my years reading Ms. Tverberg’s cogent analyses, I do not recall ever seeing her express herself in this way, quoting the bible. There is a perceived sense of futility, that things are now out of our hands. It is telling that she and many others, such as Dr. Reiner Fuellmich, are saying that there is a spiritual side to this that we need to tap into.

…There are several parts to what is happening that remind me of Old Testament writings in general, and of the book of Revelation (from the New Testament), in particular.

First, the willingness of the ultra-rich to look out for themselves and keep what look like perfectly good, cheap cures for COVID-19 from the world population seems to be precisely the kind of despicable behavior that Old Testament prophets despised. For example, in Amos 5:21-24, Amos tells the Jews that God despises their prior behavior. In verse 24 (NIV), he says, “But let justice roll on like a river, righteousness like a never-failing stream!”

As I noted in the introduction, Revelation 18 talks about lack of demand being an issue in the collapse of Babylon, and presumably in any future collapse that occurs. Revelation 18:11-13 reads:

11 The merchants of the earth will weep and mourn over her because no one buys their cargoes anymore— 12 cargoes of gold, silver, precious stones and pearls; fine linen, purple, silk and scarlet cloth; every sort of citron wood, and articles of every kind made of ivory, costly wood, bronze, iron and marble;13 cargoes of cinnamon and spice, of incense, myrrh and frankincense, of wine and olive oil, of fine flour and wheat; cattle and sheep; horses and carriages; and human beings sold as slaves.
The need for vaccine passports in some countries reminds a person of Revelation 13:17, “they could not buy or sell unless they had the mark, which is the name of the beast or the number of its name.” In fact, people in Sweden are getting microchip implants after its latest COVID passport mandate.

Some people believe that Revelation 12 describes the Antichrist; that is, the polar opposite of Christ. Before the world comes to an end, Revelation 12 seems to predict a great fight against this Antichrist, which Christ wins. I could imagine Anthony Fauci being the Antichrist.

We are not used to living in a world where very little that is published by the Mainstream Media makes sense. But when we live in a time where no one wants to hear what is true, the system changes in a bizarre way, so that a great deal that is published is false.

It is disturbing to think that we may be living near the end of the world economy, but there is an upside to this situation. We have had the opportunity to live at a time with more conveniences than any other civilization. We can appreciate the many conveniences we have.

We also have the opportunity to decide how we want to live the rest of our lives ….

What are the rest of you thinking about her ideas, and the spiritual angle to this rapidly unfolding crisis?

Well, I have been a believing Christian for a while now and so much of what I see is in end times scripture. Isaiah said Woe to those who call evil good and good evil, who put darkness for light and light for darkness, who put bitter for sweet and sweet for bitter. 5:20. How much of our press says exactly that. 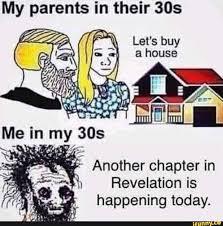 Oh my goodness, I totally agree that there is a spiritual battle taking place.  And we can see end times prophecies happening, or the stage being set.

I think some of the unexplained anxiety people feel is the approaching evil and the spiritual battle taking place.  I know I sense it.

We certainly live in unique times. Considering what Jesus said in response to his apostles, when they asked, what will be the sign of your presence, and the conclusion of this system of things? Jesus replied, “for nation will rise against nation, kingdom against kingdom, and there will be food shortages and earthquakes in one place after another. All these things are a beginning of pangs of distress”. Over many decades even hundreds of years, humans have drifted away from serving God in the way He desires. Many religions have contaminated worship with pagan practices. The cost of this drift is becoming evident

The Elite are mind controlled by the Bug. They don’t even know what motivates them at this stage of the war.

And now I have to go study Jainism.

Around two years ago Gail Tverberg wrote about turning to ancient wisdom in this unsolvable predicament, and particularly to her Christian roots. It seems she doesn’t see a lot more to explore in the grand story except as relates to Christian sensemaking, and I agree. There’s a lot more to explore if you have a reasonable idea of how things will play out, not just from a physics energy-dissipation perspective but also political, ideological, and environmental.

For an environmental example, I’ve encountered several others who also recognized that from the sixth seal to the sounding of the fourth angel—a great earthquake, sunlight darkened, moonlight darkened and reddened, asters (including meteorites) falling to earth, hail (including meteorites) mingled with “blood”, a third of the trees and grass burned up, “something like a great mountain” thrown into the sea, a great aster called “Woormwood” falls and contaminates the waters, and then a third of the sky was blocked from transmitting light—all describe what would take take place if the earth captured a small planetoid which breaks apart due to tidal forces at the Roche limit.

For ideological examples, consider that in walking back the present period of prosperity, there would also be a walking back in dominate ideology to the classical liberalism of 1776 and then the classical conservativism of the middle ages. If the antithesis for the first turning is leftist, socialist, and technocratic, then it can revolve back to liberal, individual responsibility, and accord with nature. That becomes the antithesis to the next turn toward total autocracy, valuing obedience rather than individual differences, probably in response to or anticipation of the Woormood disaster. And so I can predict at least three major “antichrists.”  And why wouldn’t an antichrist want to succeed against his own antichrist to bolster his legitimacy?  I think there are clues to these elsewhere in the Revelation of John, but some of it is working back from why the story ends, not just how.

I’m another practising Christian. In the past I’ve noticed what looked like Gail’s Christian orientation but she didn’t express it strongly.

I agree with her, and with the other people in this comments stream. World conditions are getting worse and quickly. “Like the breaking of a wall, in an instant…” (Isaiah 30:13) This had a historical fulfilment, but I think many of us agree that while history does not repeat, it rhymes.

There is so much unreasoning hatred and division in the world today, especially in the glorious West which for decades and decades prided itself on being the global role model of truth, justice and righteousness, and a place of safety from nasty governments. Australia was one such. At high school I had a classmate whose family had escaped from communist Hungary — and almost perished. At work I had a colleague whose family escaped from fascist Uruguay. I have met refugees from Chile and sundry African countries. Now WE are the ones with the nasty governments. How the mighty have fallen!

Who knows where this will end. A lot of what is in Revelation in particular but in the rest of the Bible generally is metaphorical, and it can be very hard to work out which is what. For instance, “sea” can mean sea but it can also refer to the people in general.

We can only wait and see. And pray.

You must be joking.

If so, that was amusing.

If not, that was disturbing!

I cannot remember the name of the PP member who posts this quote, but it’s my favorite among the many I have seen here:

You have reached the summit to find the theologians encamped.

This worldly existence is impermanent; all things are passing away. Do not lay up your treasures in things of this world that rust and rot. We have forgotten to lay up our treasure in the everlasting by what we do here on earth, not by what we have here on earth. This is what has so many in the grip of fear and sorrow. For those in darkness this fear leads them to do evil things. The Psalms tell us they set the traps of their own destruction. They fall into their own pits. But, yes, they can do much damage, especially to those who walk in the light of truth, love, and justice.  This is a time to trust in the power of the One who is our refuge. From my prayer book, “Almighty God, whose most dear Son went not up to joy but first he suffered pain, and entered not into glory before he was crucified: Mercifully grant that we, walking in the way of the cross, may find it none other than the way of life and peace; through Jesus Christ your Son our Lord. Amen.

The end of lives, empires, and ages are some of the most dangers times, and it brings out the worst of humanity. These times look and feel like the apocalypse, and they are little ones as humanity and history pulsate in cycles. God is the one to call the end of the world, so we should not distract ourselves or become paralyzed from living as Christ in the world. Let your good works be a witness to your faith of hope knowing that the End comes as a thief in the night.