Opening a new discussion here about the Las Vegas shooter who sprayed automatic gunfire on an open-air concert from the 32nd floor of the Mandalay.

I’m not doing much to pull things together here until we have more info (my back is out and I’m in serious pain) but just want to say I find it interesting that everyone who sees this tragedy is interpreting it in a different way. Gun control advocates see one thing, 2nd amendment advocates see another, and they are fighting among themselves before all the facts are in.

If there was ever a “wait until we have all the facts” situation, this is it.

So far, we're getting the "lone nut" angle.  All the LEO statements and newspaper articles are reinforcing that.

Here's what I wrote yesterday about a clip I found on-line:

At ~ the 4:50 mark onwards, you can clearly see what appear to be shots fired from, oh, say the tenth or eleventh floor.

I see muzzle flashes and that is *not* the 33rd floor.  Unless someone had a strobe going off at about the time of the shooting, I don't have another good explanation for this.

To which rector responded:

In my years of firing rifles in the dark (US Army Infantry) I have seen a lot of muzzleflash at night, and I don't believe that was muzzle flash.  It seemed to consistent, too disconnected from the sound, and too slow.  However, I have no idea what in the world it could be other than a bad driver on an LED bulb.

It might be good to start collecting these videos for examination later.  I am getting the same disconnected feeling I got when I watched the buildings fall on 9/11.  Nothing makes sense and the answers don't make it better.

To which I would have two responses.

1) The camera used is pretty cheap/unable to handle night scenes well.  Blooming and flare are prominent throughout.  So perhaps the muzzle flashes (if that's what they are) are not showing as you would see them in real life, with your more dynamically adjustable eyes.

2) The sound signature could well be off due to the distance involved.  Even a hundred yards puts a noticeable gap between light and sound.  I judge that distance to be more than that.

This morning, on Twitter, I came across a second angle for that same muzzle flash.  Much more convincing.

Unless this represents some twisted individual doing some video spoofing to mess with our minds (always possible), or this is a crazy reflection,  this is beginning to really stink.

That DOES look like muzzle flash.  I hope more and better videos emerge in the days ahead to bring additional clarity to the situation.  Given the fact that there were 30,000 + smartphones in the area, I suspect that there will be many more surfacing. 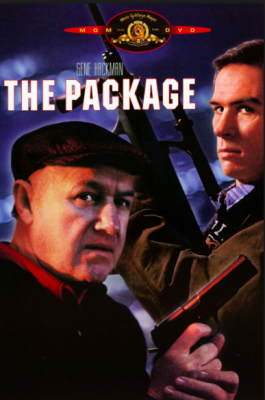 In this movie, Hackman, an army sergeant, escorts a soldier, Thomas Boyette (played by Jones) home from the Army base in Germany to the US for his court martial.  But during their trip home, the very practical Hackman starts to smell a rat.  The rat gets bigger when Hackman is mugged and Boyette escapes and dissappears. Hackman gets it that the mugging was not random.  Hackman comes to understand that some of "the authorities" may be in on the scam sets out to find Boyette alone.

Meanwhile, a second story line is developing around another person with the same name: Thomas Boyette.  Our second Thomas Boyette is the real one.  A soldier if low intelligence who is given the job of infiltrating a communist group, passing out leaflets and establishing a very visible public presence as "a communist."  He believes he is gathering information on the communists for his case handler–but it turns out that he is not.  He is being set up to be the patsy for an assassination that the other Thomas Boyette is about to commit.

It is a story that illustrates the care with which an intelligence agency positions both the assassin, and prepares the life story of the patsy.

The bump fire can create a very close approximation of the cyclic rate of a full machine gun.  But with noticeable slight gaps in the timing which seem to match what I heard in several spots.

Let's not freak out, yet.  Let's have the details come out. Let's apply some unemotional logic and reasoning.

[quote=Time2help]Cyclic rate seems to match. Anyone with crew fired weapons experience feel free to chime in.

Sure sounds like it.  Of course someone would have to have pulled the tracers out of the belt.  If true, it will not be possible to hide the 7.62 bullet holes all over the place.  The caliber will come out and I'm going to guess 7.62X39.

If it is a M240B, there are profound implications.  Ours weren't issued until the late 1990's and so almost NONE are in the Class III NFA transferable inventory.  Only a Class III Dealer SOT (Special Occupational Taxpayer) could possibly have one as a dealer "sample".  I found ONE for sale as a post 86 dealer sample and it was $27,500.00!

I would also have a hard time believing one could be found on the "black market" as they just aren't available through civilian channels.

That being said, the sound and cadence were compellingly similar.

Seems like wise, legitimate uses of police armored vehicles.  Too bad one equipped with a real M240 wasn't at the venue when the shooting started.

Maybe he had a brain tumor… or dementia.

Interestingly, from this angle I didn't see any muzzle flashes.  Same is true from a number of vids I've seen.  Suggests that those shown in the above linked vids may have just been reflections, video editing or perhaps the gunman was shooting from deep in the room so that flashes could only be seen from relatively narrow angles.  It would be interesting to see where the victims were concentrated from an aerial perspective.