One thing is for sure, TPTB can not allow continued resistance to US imperial rule, the rise of China, Russia, Iran, Asia, and all the other countries who are defying the mechanisms of oppression that has kept billions of people living lives of suffering and despair. If these countries continue to grow their economies outside the sphere of western finance and raise their populations up out of poverty, the global demand for the limited, finite resources will skyrocket. This at a time when virtually all resources are under increasing constraints. This is a recipe for true uncontrollable chaos and TPTB will suffer as much as everyone else.

As we all know that for TPTB control is everything. Right now they still have enormous control over global trade through total control over the dominant global money system but they can see the writing on the wall ultimately leading to the demise of the dollar. It seems to me that there is a limited time left here where they can initiate collapse in a manner under which they can still exert a degree of control by creating a global deflationary depression.

The Great Depression of 1929 was a deflationary depression created by the bankers. TPTB, the rich, powerful, and famous didn’t even feel the depression as they still had tons of money and access to more. Deflation makes the dollar worth more, makes everyone want it. It also destroys demand better than any other event. It also creates opportunities for TPTB to consolidate control and implement new forms of drastic control. A depression also makes it easier to rally the population behind a war. Maybe throw in another pandemic for good measure then some kind of global internet blackout.

The US and thereby TPTB controls the IMF, the World Bank, and the network of central banks. Through these entities it can easily trigger a global deflationary depression unlike anything the world has ever seen. I believe they are setting this up with all this talk of inflation, hyperinflation, etc.

This will change the entire global focus away from all the problems and will allow those with massive concentrations of wealth and power to set up and initiate “The Great Reset” and it won’t be pretty.

>>>  The Great Depression of 1929 was a deflationary depression created by the bankers. TPTB, the rich, powerful, and famous didn’t even feel the depression as they still had tons of money and access to more.

The 1930’s made them far wealthier.  They were able to pay pennies on the Dollar for a lot of assets.

Why do you think it will be Deflationary ?

Maybe there will evolve a new word, reflecting the presence of all that cash sloshing around, AND the desperation of the insolvent.

I had a neighbor whose pigs got loose recently, and he did not do well during Covid, during the last year and a half.

Since it was such a cutie pie and got along well with my birds, I would have bought it – if I wasn’t trying to downsize.  Too many animal responsibilities.

A rooster woke me up at 4 AM this morning because I had parked him in a spare bathroom overnight because he requires isolation.

My Dream is to see the sequel to Alien Resurrection written with the Mille Fleur variety of bird receiving the Alien DNA.

The rooster that woke me up is 1/2 Mille Fleur genetically but 100% Mille Fleur behavior wise. 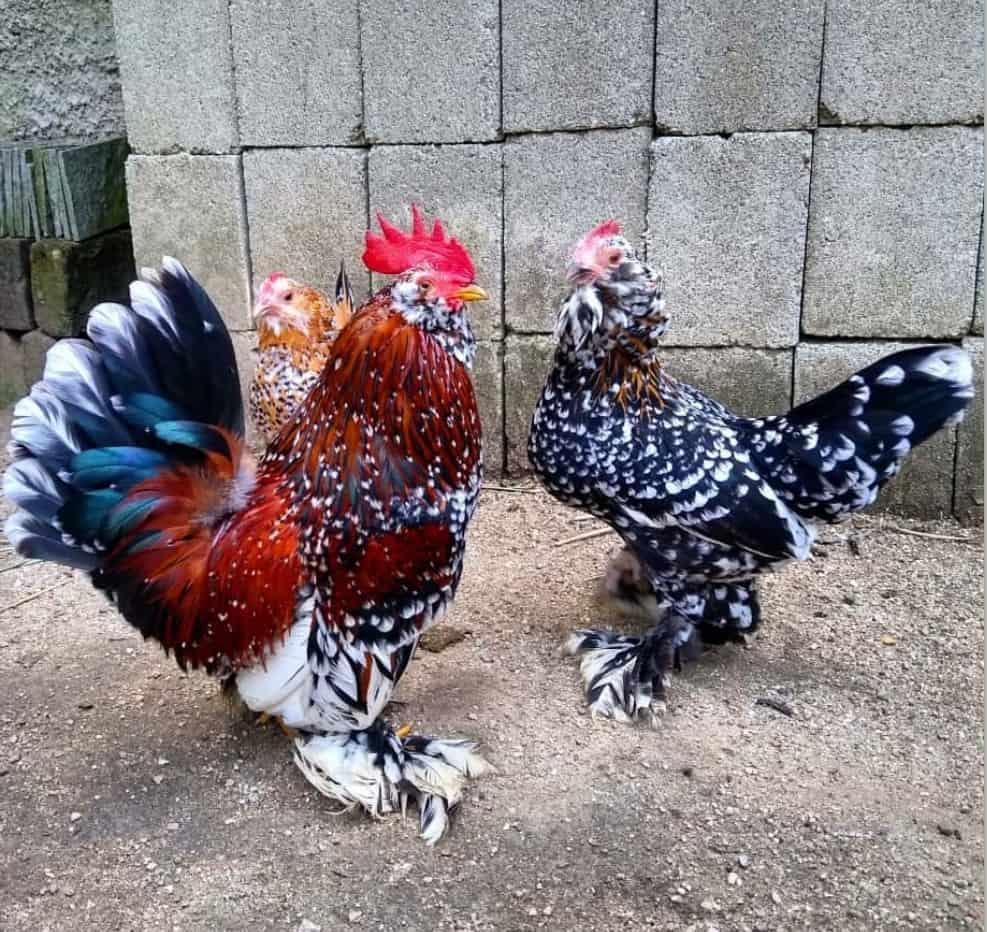 Anyway, not trying to change the subject.

The situation has evolved to the formal definition of Fascism, side-stepping the drama of the word.

The fusion of Corporate and National economics.  For example the US government support for housing prices.

Which was quite visible in 2008-9.  But may be present 24/7, for example with Fannie Freddie financing.

If that support is withdrawn, it will probably be deflationary for RE prices.

In order to model something like this accurately, you need ALL the pertinent information, which pretty much means ALL the information.

And it’s a HUUUGE amount of economic data – much of it hidden behind expensive paywalls !

So, don’t we have to conclude that in order to have a deflationary depression the govt and central bank won’t do what they’ve ALWAYS done in the past: debase the currency and ignite a huge inflation? It could happen, but wouldn’t it be the first time in history? (I am explicitly ruling out a sequence of 1. Deflationary scare, 2. Debase the currency through massive printing, 3. Huge inflation, 4. (Deflationary) collapse. I’m assuming netlej means a deflationary collapse/depression without a hyperinflation period first. It’s possible because the conditions are ripe for it, but it will be the first time. I’m ready either way, but expecting the huge inflation to immediately precede the deflationary depression.

thc – I agree the dynamics would be different than the run up to 1929 but all that banking/finance has to do is pull all loans and end lending. There is a massive real estate bubble all around the world along with what they call the “everything bubble”.

Inflation is too many people with too much money chasing too little product. This makes the price of products go up.

If you have people with a steady or low amounts of dollars but less and less product the price of products will go up. This is not inflation it is resource constraints.

Right now we definitely do not have lots of people with more and more money, quite the opposite. Yet they keep worrying about inflation. Inflation will never happen when they keep giving all the money to .01% of the population, except for all of that crushing, life threatening YACHT INFLATION!!!!

In order for very high inflation or hyperinflation to occur there has to be massive, and I mean massive inflow of dollars to each and every person. I don’t see how they can achieve that.

Creating hyperinflation is incredibly difficult, I would say impossible for the US dollar due to its unique global status. When people write deep articles predicting massive inflation ask them how they see TPTB getting massive amounts of money into every citizens hands? What they can do is massively restrict the supply of products and when they go up in price they can point to that and yell …oh no, inflation!

Creating deflation is a piece of cake. They just pull all loans and stop lending.

“In order for very high inflation or hyperinflation to occur there has to be massive, and I mean massive inflow of dollars to each and every person. I don’t see how they can achieve that.”

Simple:  Take a ONE dollar bill and pass a law making it legal tender for all citizens to hand print three zeros after it.

With all respect, you couldn’t be more mistaken. Case in point, the Great Depression.   This started as a “deflationary” depression (dollar gaining in value)  ONLY because dollars were legally redeemable for gold and, when the Ponzi printing of dollars was called, the gold didn’t exist.  So, naturally, there was “deflation”.

“The Gold Reserve Act of 1934 made gold clauses unenforceable and authorized the President to establish the gold value of the dollar by proclamation. Immediately following its passage, Roosevelt changed the statutory price of gold from $20.67 to $35 per ounce, thereby devaluing the US dollar, which was based on gold.

1933 CPI and Inflation Rate for the United States

This table shows the Monthly All-Items Consumer Price Index (CPI-U) and Annual Inflation Rates for the United States in 1933. You can find upcoming CPI release dates on our schedule page. These numbers are released by the Bureau of Labor Statistics.

The super-sad thing is there was an even BIGGER Depression in 1921.  You never hear about it because it resolved itself in about 18 months all by itself; that is, the government didn’t intervene.

F. D. Roosevelt ought to be known as F*#king Dictator Roosevelt.   Yeah, his heart may have been in the right place, as there were abuses to right.   However, he stole an immense quantity of gold from middle-class private citizens and consigned all the middle (working) class to an inflationary hell which continues, to this day, to TRANSFER ALL WEALTH ROM THE MIDDLE CLASS TO THE RICH.

“With all you’re getting, get understanding.”  -Forbes

Stf – I am fully aware that normal, historical inflation and deflation does occur. There is no question that the central banks have debased the dollar on a regular and occasionally growth slows, money flow is reduced and we have brief periods of deflation and they call it a recession. Neither of these are terrible as for the most part basic consumer goods are very affordable for most people.

Many who observe this phenomena understand that the Fed has almost no control over the economy. Most of their actions follow the economic ups and downs, they do not create them. Best example is the last 10 or even 20 years where the Fed has printed tens of trillions dollars and it has had almost zero effect on the real economy. All it has done is kept the Ponzi scheme from collapsing which would take the real economy down with it.

The Government does have some control over the economy and can pump money into the economy through projects and to a limited degree through direct handouts. The Govs ability to inject money into the economy is in theory unlimited but they lie and tell everyone that they can only spend what they take in. This is ridiculous and in practice they have never done that. Free money is only for the wealthy and powerful. MMT does a much better job of explaining this fact.

By 1933 the depression, which was artificially induced deflation where loans were pulled and new lending stopped, eventually there was almost no money in circulation and that which was out there eventually got spent out of existence by paying off debt and paying wealthy rentier class their rent payments which do not remain in circulation in the real economy. This had the effect of destroying the demand for goods and services down to almost nothing, production almost came to a halt. This created a fantastic opportunity for the wealthy elite and powerful to buy up vast amounts of productive capacity and consolidate their control.

By 1932-33 the pressure to end the depression was strong, TPTB had accomplished their consolidation and therefor money (debt) was reintroduced along with Government spending. Now people started to have money but production was still hugely reduced, consumer goods were scarce therefor more expensive. CPI went up as people began to have money again bidding on limited availability. CPI is not just a measurement of money increase. In fact they are not measuring how much money is being “printed” or how much people have at all. It simply measures the price of things.

As I have outlined many times here at PP there are two reasons for the price of things to go up. One is when there is more and more money bidding on a stable amount of things. The other is when a stable amount of money is bidding one a shrinking amount of things. Both these situations will increase the price of things. Sometimes we have both happening at the same time and this is tragic. CPI is almost meaningless. The Fed, the Gov, any Gov around the world can print all the money they want but they can’t print things.

So to make a long story a little longer The Banksters who you must know by now own Gov lock stock and barrel, can call in all the debt that they can and stop lending more for awhile because they already have more than Dog, and trigger a massive deflationary depression throughout the world or at least throughout the dollar zone which is about 2/3s of world economy and there would be spillover into the rest of the world too.

stf- Sure the Gov could have everyone add several zeros to the dollar but the Banksters would never allow that, the Gov officials would get JFKoed.