I wanted to dissect this article logically. There are some huge points here and some contradictions regarding the source of the cleavage site.  p.s. i am not a virologist, i am a data analyst with a B.Sc. if you care.

“Decroly sounded the alarm on February 10, when many were still seeing the epidemic as an exotic problem specific to the distant Chinese city of Wuhan. At that stage only one person had died outside of China. But, according to Decroly, the new virus’s spike proteins had an additional element that distinguishes it from the spike proteins of other similar coronaviruses – the site where it could be cut by the furin enzyme turned it into a lethal weapon. “The furin cleavage site is one of the reasons why SARS-CoV-2 is so transmissible,” agrees Fang Li, a virologist from the University of Minnesota who has just published a report in the scientific journal PNAS on the virus’s “amazing strategies” for entering human cells by circumventing the immune system.”

this is pretty simple. a lot of deaths could have been avoided if this warning was taken seriously.

“American virologist Jack Nunberg conducted one such controversial experiment in 2006. He took the SARS-CoV-1 virus and inserted a site that could be cleaved by the furin enzyme. He does, however, believe that SARS-CoV-2 is the result of natural mutation. He argues that the genome of the new coronavirus has multiple differences besides the 12 letters compared to other coronaviruses. The most homogeneous virus is the bat coronavirus RaTG13, which only shares 96% of its genome with the current SARS-CoV-2. It is estimated that both diverged from the same virus about 52 years ago. In evolutionary terms, this “is roughly like a human and a pig,” as geneticist Rasmus Nielsen from the University of California, in Berkeley, puts it.”

The chance that someone would make all those changes in a laboratory is “far-fetched but not impossible,” says Nunberg

“It’s the 1,000 monkeys with typewriters who may eventually, at random, type out a Shakespeare play – stuff happens”.

He conducted the gain of function research himself but he thinks its more likely came from nature? and he is arguing that 52 years of evolution turned a human into a pig? He also is saying 1000 monkeys are more likely to write the virus than the gain of function researchers. these points fall pretty flat for me. it seems like there are some contradictions and conflations here. he also relied more on metaphors rather than scientific reasons.

Good find ENERSHA! His “reasoning” looks faulty to me too (and I’m not a virologist either).

I completely disagree with the professor’s conclusions.  Yes nature is an amazing combinatorial laboratory.

But it’s equally true that humans can greatly stack the odds by making sure that new viral mutations land in a rich cell culture medium with permissive host cells lying all about.

Nature struggles with that part a bit because, wouldn’t you know it, pangolins, bats and humans tend not to share fluids and/or close proximity all that often.  So even if a bat had one of these amazing recombination/chimeric or random mutation events, that virus particle then needs to rather immediately land on a permissive new host.

To say it’s “unlikely” to have happened in a lab completely overlooks the fact that this happens in labs all the time, and is well known, and published (even by the good professor himself).

So every time I hear a prominent virologist “tipping the scales” away from a lab origin and towards nature I think to myself “that person is lying.”

Then there’s the issue of the polybasic PRRA furin cleavage site that is not found in *any* close beta coronavirus relatives of SARS-Cov-2.  So when I hear a prominent virologist skip right over that detail and “tip the scales” towards nature I think to myself “that person is a lying sack of dung”

I sure agree that that is an awesome find and offers beautiful pictures illustrating the role of the S1, S2 and furin clevage site.  Explanation closely matches the article that Chris revealed to us all a couple of months ago by Yuri Deigin.

An illustration from one of the source articles,  Coronavirus membrane fusion mechanism offers a potential target for antiviral development.  by TiffanyTanga.

There are 2 paths for the SC2 to enter a cell, the “early pathway” and the “late pathway,” both of which require a snip between the S1 and S2 portions of the spike protein. 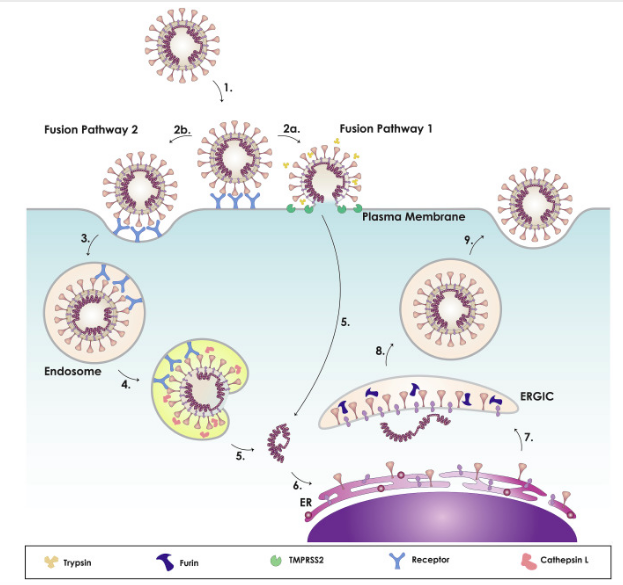 This model depicts the two methods of viral entry: early pathway and late pathway. As the virus binds to its receptor (1), it can achieve entry via two routes: plasma membrane or endosome. For SARS-CoV: The presence of exogeneous and membrane bound proteases, such as trypsin and TMPRSS2, triggers the early fusion pathway (2a). Otherwise, it will be endocytosed (2b, 3). For MERS-CoV: If furin cleaved the S protein at S1/S2 during biosynthesis, exogeneous and membrane bound proteases, such as trypsin and TMPRSS2, will trigger early entry (2a). Otherwise, it will be cleaved at the S1/S2 site (2b) causing the virus to be endocytosed (3). For both: Within the endosome, the low pH activates cathepsin L (4), cleaving S2′ site, triggering the fusion pathway and releasing the CoV genome. Upon viral entry, copies of the genome are made in the cytoplasm (5), where components of the spike protein are synthesized in the rough endoplasmic reticulum (ER) (6). The structural proteins are assembled in the ER-Golgi intermediate compartment (ERGIC), where the spike protein can be pre-cleaved by furin, depending on cell type (7), followed by release of the virus from the cell (8, 9). For SARS-CoV-2: Studies currently show that SARS-CoV-2 can utilize membrane bound TMPRSS2 or endosomal cathepsin L for entry and that the S protein is processed during biosynthesis. Other factors that can influence the viral entry pathway are calcium and cholesterol (not shown).

Seems like Darwin missed a lot in his theory of Evolution. 52 years pig to human wow.

To me the most interesting part of this is that he sounded the alarm on Feb 10th and it was ignored.

I remember ZeroHedge also getting censored around the same time with similar claims.

How much damage could have been avoided if these ideas were discussed early on rationally rather than being censored?