[This is a partial summary of of a UCSF July 16, 2020 online seminar on the effectiveness of masking and face shields.  Only masking is covered in my summary below. A link to the archived seminar is included]

Do masks’s work as source control? They do for influenza, according to Dr. Don Milton, MD, Professor of Environmental and Occupational Health, at the University of Maryland. His comments were made at an online seminar hosted by University of California San Francisco Department of Medicine.

The graphic indicates that for flu particles above 5 microns in diameter, the mask filters all droplets exhaled by the mask user, and for smaller particles, the mask filters some of the particles. Another study indicates that masks likely block Coronaviruses too. The University of Maryland is now studying Coronavirus transmission, and will hopefully have more conclusive information soon relating to Coronavirus aerosol transmission and the effect of masks. 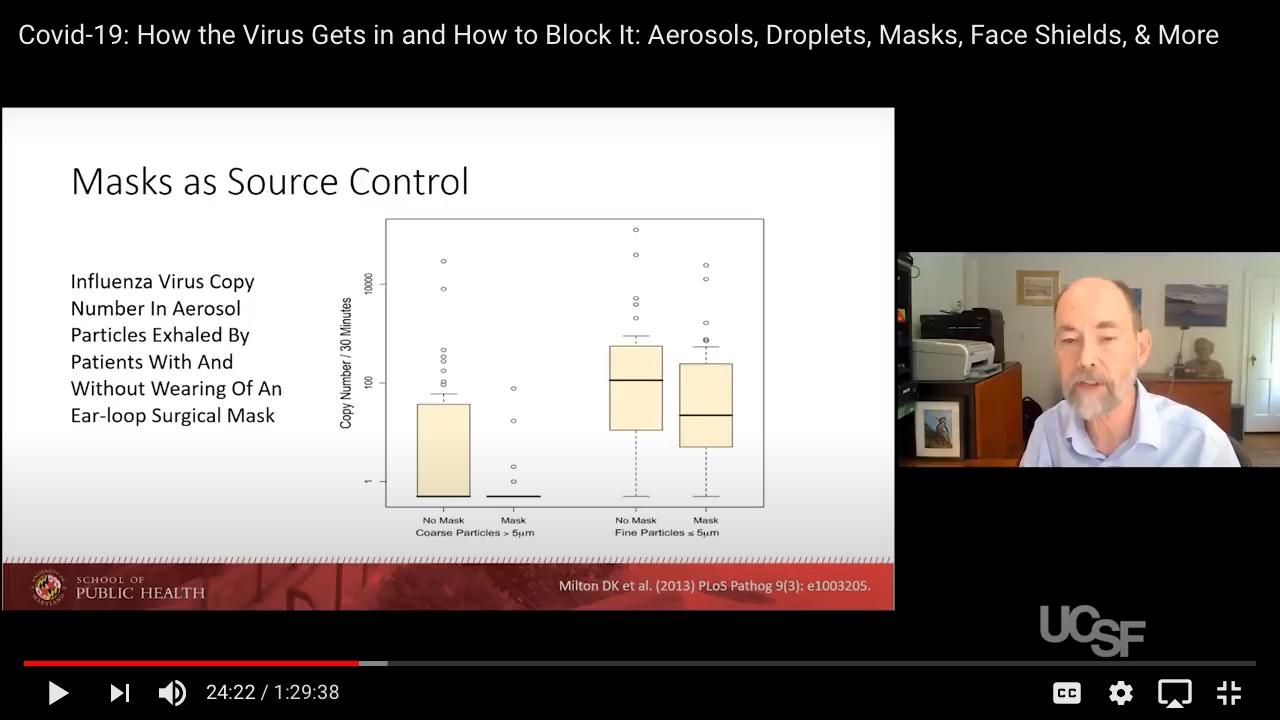 Some have concluded that masks will not work, as the Coronavirus particle is only about .25 to .5 microns in size, which are often not filtered by masks.  However, according to Dr. Milton, viruses are communicated through inhalation of aerosol droplets (which are hosts to the smaller virus particle), which can vary in size from 2.5 to 100 microns in width, as well as by ballistic drops above 100 microns in size (see graphic below). Five micron droplets/aerosols can remain suspended in the air for many minutes to hours. Indoor air movement can cause them to travel 270 meters. Masks reduce the number of respirable aerosols and largely eliminate splash and and spray droplets. 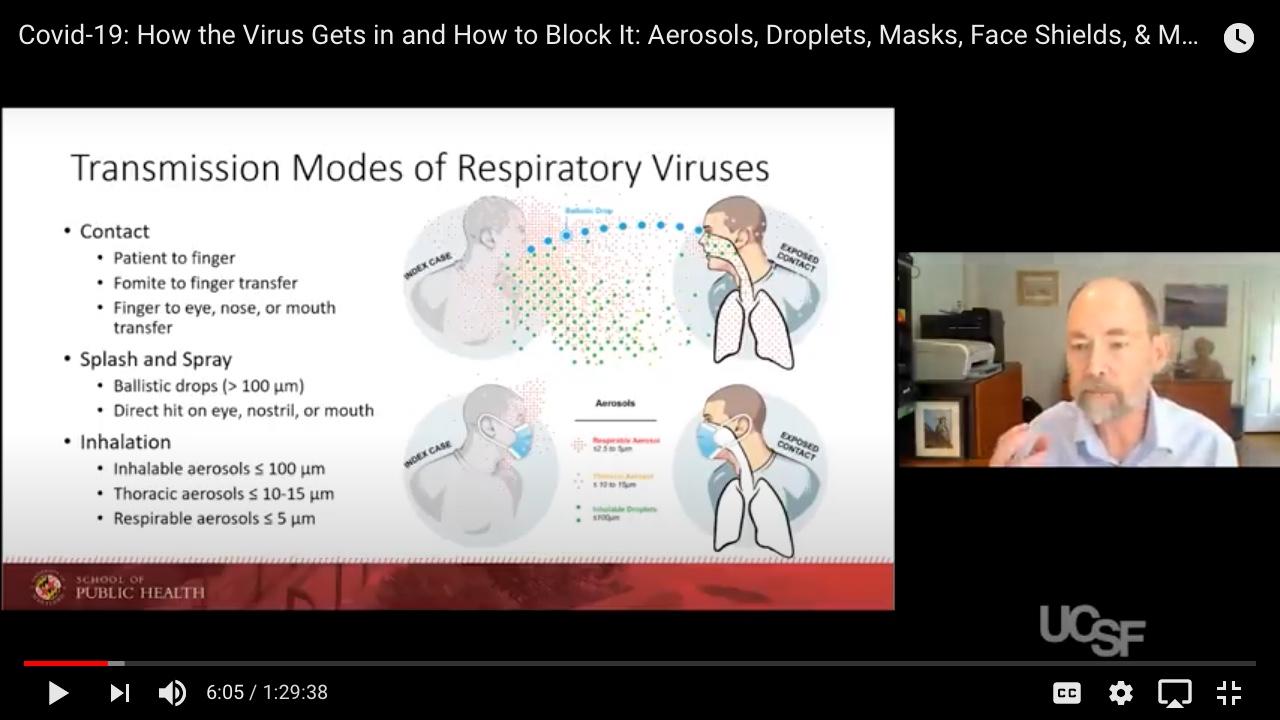 It seems to me that the information so far mentioned here, while not absolutely conclusive with respect to COVID-19, should be more than enough motivation to cause us to want to wear masks in situations where one is in close contact with persons, whether in confined spaces or outdoors. Some masks with filter inserts will filter out particles down to 2.5 microns, well below the droplet sizes mentioned above.  This makes the CDC’s claim appear highly credible, that the pandemic could be eliminated in 2 months if the entire population would wear masks.

Regarding airline travel, Dr. Milton agrees with Dr. Fauci, in that he would avoid airline travel. Airline cabin air conditioning systems blow the air downwards onto the passenger, but the passenger emits a heat plume. The intersection of those two air currents generates a horizontal component that transmits air between nearby passengers. Milton was a participant in the FAA’s Airline Cabin Research Center of Excellence.

Also participating was Monica Ghandi, UCSF Prof. of Medicine, specializing in infectious diseases and global health.   She pointed out that the current estimate is that 40% of COVID infections are asymptomatic.  Asymptomatic persons can have high viral shedding from the nose and mouth, even when they feel well. She stated that N95 masks filter 90 to 95% of particles, whereas cloth and common non-surgical masks filter 65% to 85% depending on cloth and proper use.  She strongly urged people not to wear masks with valves, as they emit virus particles during the exhalation.

Monica made some enlightening points about the “age-old” theory that viral inoculum (dosage) relates to viral severity, which suggests that wearing masks can reduce the severity of a persons’s bout with COVID, should they become infected.

Here is a 2015 study she referred to that that showed a relationship between inoculum and disease severity, with Influenza A.  It was published in the journal of Clinical and Infectious Diseases, and shows that severity and days that the symptoms persisted markedly increased with inoculum.

Also referenced was a may 2020 controlled study of hamsters.  Some were infected with SARS Cov-2, and others were not.  In one instance, a mask filter was used to filter the air between the infected and non-infected populations.  It was shown that the mask filter material led to a lower instance of infection, and reduced transmission to the uninfected hamsters to only 16%. It also showed that the symptoms in hamsters protected by masks were much less severe than in those that had been challenged (initially, deliberately infected).

The question was discussed whether or not asymptomatic (less severe COVID) cases increase with masking, a positive, desired result.  There is evidence that it does.  On the Diamond Princess cruise ship, where masks were not worn, only 18% were asymptomatic.  As previously mentioned, the current estimate of asymptomatic cases in the U.S. population is about 40%. On the other hand, a cruise ship in Argentina that developed a case of COVID had surgical masks issued to all passengers and N95 masks to all crew.  The results were spectacular, with a whopping 81% being asymptomatic.

Here is a reference to the study of the Diamond Princess cruise ship: https://www.ncbi.nlm.nih.gov/pmc/articles/PMC7078829/

Here is a reference to the study of the Argentinian cruise ship:  https://pubmed.ncbi.nlm.nih.gov/32461231/

Monica mentioned that an Oregon Seafood plant and Missouri Tyson chicken plant, where masks were issued, both had about 95% asymptomatic rates.

While countries accustomed to using masks since the SARS epidemic (Hong Kong, Taiwan, Thailand, South Korea, Singapore, Vietnam) have rising cases in many instances after the reopening of their economies/institutions, their death rates, according to Monica, are not up.

Monica presented another study which estimated that the death rate would remain extremely low (60,000 deaths) in cases when 80% of the population wore masks, but when only 50% wore masks, the estimated deaths would triple to 180,000. 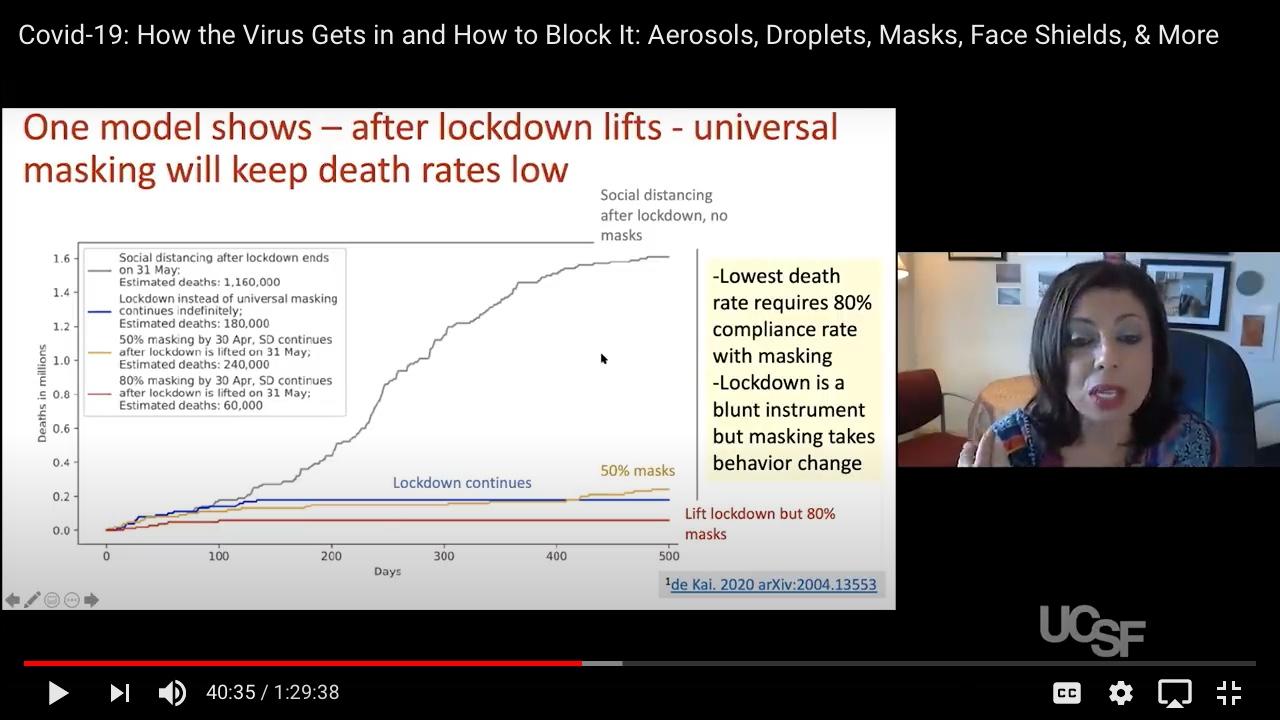 San Francisco, which has a history of robustly responding to pandemics (including in 1918), has only a 1% CFR.  They have done a lot of testing (198,739 tests), and have had 4,860 positive cases, and only 51 total deaths.  According to Monica, they probably have 80% mask compliance.  Of a sample of 30,000 of those tested, the majority of the positive cases were asymptomatic.

A Boston area hospital instituted a mask policy after a large increase in infections among health care workers, and the result was a stabilization of cases, and then an eventual declining trend in cases.  You can see the graphic here: 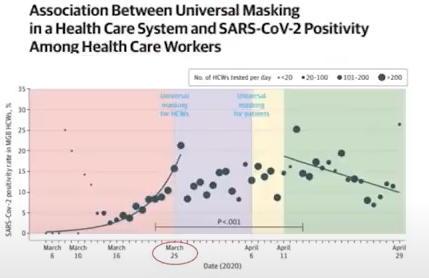 On another positive note, she makes the claim that after 8 months of COVID, there has been no convincing cases of reinfection (although there have been numerous anecdotal instances that suggest reinfection). This suggests that immunity may be possible.  The immune system is very complicated, and it seems that antibodies are not the only sign that immunity might be present.

So there is much evidence, regardless of whether it is considered conclusive, that masks help to contain COVID, reduce the severity of illness, and there is a significant likelihood that 80% or higher mask compliance rates in the population would drive the transmission content to below 1, which would cause the pandemic to die out.  We have seen that countries like Taiwan, which have widespread mask wearing, have had virtually no deaths and infections (9 deaths, about 400 infections of a 20+ million population), and in Taiwan, schools and businesses are open.

Ironically, those who want President Trump to be reelected are, with high probability, often effectively working to diminish the likelihood of his reelection by strongly pushing back at the mask idea, thereby increasing the likelihood that the economy will not recover by election time, making his reelection less likely.  Just today, we heard that the GDP has cratered by 38% since the beginning of the year.  It is a perfect storm, similar to what brought the defeat of one of our best presidents, Herbert Hoover, after the 1929 stock market crash.