Since it was first identified as a threat in March of this year, the Ebola outbreak in West Africa has taken at least 7,500, according to the latest tally by the World Health Organization.

US Gets Wake-Up Call: Ebola Still a Threat

On the day before Christmas, the United States got a reminder of a danger many had probably started to forget: the Centers for Disease Control (CDC) announced a lab technician in Atlanta was being monitored for possible exposure to Ebola.

The CDC reported that the technician could have been exposed to the deadly disease when a test plate containing the virus was accidentally put into his workspace.

The woman, who arrived from Sierra Leone on Sunday night, is in isolation at Glasgow's Gartnavel Hospital. All possible contacts with the case are being investigated, including on flights to Scotland via Heathrow. UK Health Secretary Jeremy Hunt confirmed that the woman would be taken to a specialist unit in London. She will be flown from Glasgow and taken to the Royal Free Hospital in north London "as soon as we possibly can," Mr Hunt said. How Ebola Roared Back (NYT)

“This is close to over,” Dr. Rollin told himself, a view common among the virus hunters. “That’s it for this outbreak.”

Or so he thought. In fact, Dr. Rollin and other well-intentioned veterans of past Ebola campaigns had tragically underestimated this outbreak, overlooking clues that now seem apparent. Viewing the West Africa epidemic through the prism of nearly two dozen previous outbreaks across the continent, they failed to appreciate that the 2014 version would be unique in catastrophic ways.

The Liberian Observer, one of the nation’s largest newspapers, reports that the government has decided to put an end to the cremation process after significant public backlash. Liberia had previously required that all Ebola victims be cremated, so as to avoid contamination through traditional burial practices. Such practices require the washing of the body, which would put those performing the ceremony in contact with the deceased’s bodily fluids.

“Cremation of dead bodies is not and has never been a part of the Liberian culture, but the Liberian government was forced, during the heat of the Ebola crisis, to initiate the practice in an effort to curtail further spread of the virus,” notes the newspaper. The Observer adds that forced cremation caused many individuals to hide the bodies of the dead and bury them as tradition demanded in secret. Many of those who refused to follow government orders, in turn, contracted Ebola. 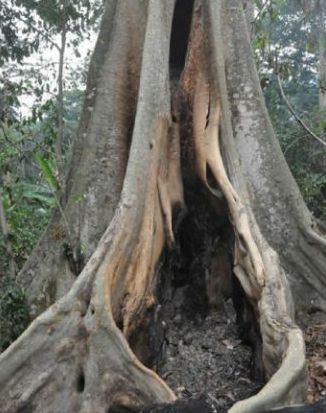 Researchers think they’ve found the origin of the current Ebola outbreak – a large tree, filled with Angolan free-tailed bats, around which local children were known to play. . . “These bats are reportedly targeted by children, who regularly hunt and grill them over small fires,” the team writes in the current edition of EMBO Molecular Medicine.

Quammen paints a cosy picture, which explains why these little bats were so enticing to the local kids – "Imagine a marshmallow roast, except the marshmallows are mouse-size bats devoured by protein-hungry children,” he writes.

Formulating this hypothesis was no easy task – it required intensive sleuthing at what they believe to be the source, Méliandou, interviewing locals and seeking out day-to-day activities that could hold vital clues.

Is Ebola Here to Stay? (Scientific American)
Why scientists continue to be perplexed by how to define the outbreak that has killed 7,000.

In public health terminology the word used to describe this kind of health threat is “endemic.” The term describes any malady that routinely crops up without having to be reintroduced from an outside source—either imported from another country or another species. The flu, for example, is endemic in the U.S. because various strains reappear the following year without any trouble. Yet the many Ebola outbreaks of the past 40 years are not referred to as endemic because the original source of the infection in each case is widely believed to be an animal that somehow infected a human.