Always good to be aware of and consider other (potentially more) plausible explanations for data.

Appreciate your keeping up with the stats. The media has gone on to the next sound bite, but this is still an important issue.

The commander of U.S. forces deployed to an Ebola outbreak in West Africa says troops are finishing much of their work in the country and will expect new direction by month’s end.

Seven Ebola treatment units have been turned over to Liberian officials, and another 10 will be finished by the end of December, said Maj. Gen. Gary Volesky, the joint force commander for Operation United Assistance. Troops are still training local health care workers and performing lab work to diagnose the disease — tasks increasingly assumed by U.S. and international aid workers. 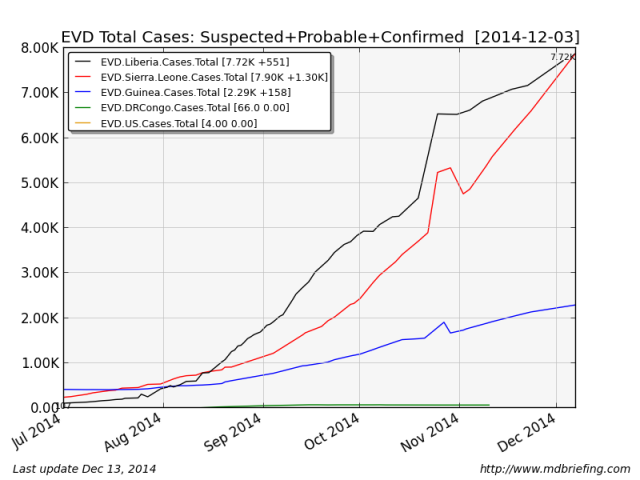 yes, I agree. The September situation was 1 1/2 years to 100% worldwide infection (if things continues as they had). Currently, infection totality appears to be 5 years. However, that is if the reports are modestly accurate.
The WHO has been saying that they think Liberia has bust been unabne to report cases. In which case the year and a half COULD be (but probably isn’t) still on.

Still, the thing that scares me most is the initial part of a region’s curve, doubling every 3-5 days.