When we criticize the locals for being afraid of organized medicine and government with respect to this outbreak I will think of these types of mistakes and I will no longer mystified by their fears….

"The Daily Observer recently discovered that the control process as announced by the Liberian government took a different dimension as the temperatures of those leaving from one area to another were tested by nurses assigned at various checkpoints using only three thermometers.

The testing process has been questioned by some segments of the Liberian society, including foreign nationals who visited Bomi over the weekend."

Thank you Wendy for posting these articles. The foreign policy one was especially sobering.  I think the world is about to pay the price for its fascination with technology and bright shiny new things and disdain for boring, basic infrastructure maintenance.   Just as peak oilers despair about monies being poured into new airports, roads, etc in an era of declining petroleum while the electrical grid and sewer systems fall into disrepair, the world has allowed basic health care to languish in parts of the world like west Africa while pursuing high tech stem cell therapies, organ transplants, gene therapies, cosmetic surgery for its more privileged members.

There is a lot of evidence that vaccines alone were not responsible into the dramatic decrease in the usual diseases of childhood in the last 70 years but it was also improved sanitation and nutrition that helped as well.  I see in the foreign policy article the list of “must haves” was for such basic medical supplies it was heartbreaking to read.  To not even have some bleach, gloves or basic saline or ringer’s lactate to rehydrate a patient and help protect you from infection, it is unthinkable.  And now this outbreak is threatening the global village because we were asleep at the switch.

It is surprising how quickly these diseases in far away places can impact nearby.  Two days ago I heard that a family friend living on the Arabian peninsula was in the hospital on a ventilator, and his daughters which are friends of my daughters (living in USA with their mother now divorced) were flying to see him.  I immediately thought "Oh my…sounds like MERS (Middle East Respiratory Syndrome) and the Case Fatality Rate on that isn't good at all!"  Sadly, news came last night that he had passed away only seven days after first symptoms.  I don't know for certain it is MERS but the odds are very good, as this was a big bear of a guy and very healthy last time I saw him 6 years ago.

And so after initial thoughts of sadness of the family's loss were passing, other thoughts began crossing my mind…we spend time with the daughters and mother, and one of my daughters sometimes gives rides to/from school for one of their daughters…and these young ladies are in the middle east with who knows what type of transmissibility precautions, and at some point soon will be flying back to USA with a plane load of people who have potential exposure as well.  So now rather suddenly I need to start paying close attention and worrying about the real threat of MERS transmitting in my household.  Three days ago I wouldn't have dreamed it possible.  Paying close attention to these distant illnesses is indeed prudent.  I don't know how many in USA have any awareness of MERS at all, but now it just took away someone I know!

"Because we still do not know exactly how people are infected with Ebola, few primary prevention measures have been established and no vaccine exists."

Newsweek is reporting that five immigrants out of 40 who were arrested in Albania on Thursday have shown signs of symptoms of Ebola, according to the Macedonian newspaper Vecer.

Albanian police believe the five immigrants arrived from Eritrea by illegally emigrating to Europe through Greece. The immigrants are being tested in a hospital in Vlore, roughly 85 miles from Italy’s closest port. Earlier on Thursday, one person in Montenegro was quarantined and was suspected of carrying the Ebola virus. That person apparently got to Montenegro from a West African country.

Meanwhile, Serbian authorities have 14 people from Liberia, Sierra Leone, Guinea or Nigeria under 21-day medical surveillance for fear they, too, may carry the Ebola virus, according to the Bulgarian newspaper Standart. If they do have the virus, they would be the first uncontrolled instances of the virus in Europe. A Spanish priest was the first European victim of the virus; he was flown to Madrid after contracting Ebola in Liberia.

Basically, this article says the USA is not insisting on sending people back if their visas have expired.

Thanks, Tall, for the link to post on Virology Down Under.  VDU is maintained by a renegade microbiologist as a public health and general interest service.  I trust that he is not representing vested interests and is telling the story as well as he knows it.

"You cannot catch Ebola (EVD) by an airborne route, but you may from droplet sprays." Wait, what??

The issue lies in the definition of the words used to describe the little droplets of water/saliva/mucous that are spewed into the air by coughs, sneezes, vomiting, spraying down equipment, flushing toilets, etc.

Big Droplets larger than 5-10 microns, fall to the ground within seconds or impact on another surface, without evaporating.  The BIG droplets have been called "droplet sprays," and informally, "spittle," and fly about 1 meter, the "spittle range."  These carry transmissible virus.  This is the reason for the recommendations that people within a meter of infected patients wear masks that cover the nose, mouth and eyes.

Smaller droplets remain suspended in the air and evaporate very quickly (< 1/10 sec in dry air), leaving behind particles consisting of proteins, salts and other things left after the water is removed, including suspended viruses and bacteria. These leftovers, which may be more like a gel, depending on the humidity, are called droplet nuclei. They can remain airborne for hours and, if unimpeded, travel on air currents. The droplet nuclei do not seem to be infectious. 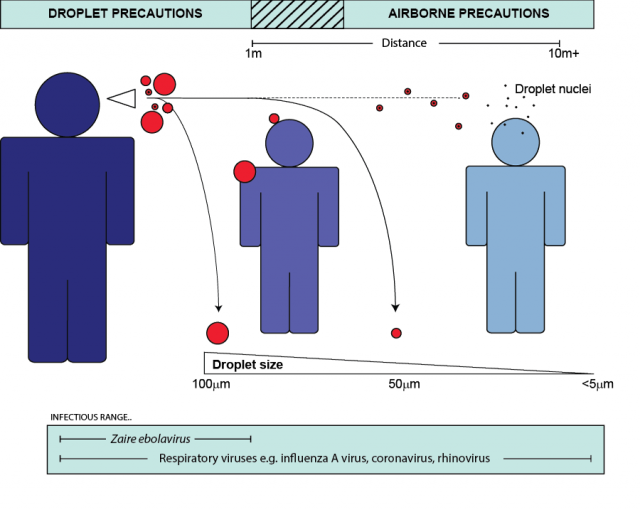 The best evidence available is that the large droplets are infectious, while the droplet nuclei are not.

And last, confusion spawned in the scientific literature:

The scientific literature has a number of very specific examples where droplet nuclei have been used to infect non-human primates with ebola viruses in order to study the effectiveness of vaccines or antivirals.  These infections are under idealized laboratory conditions, often with what we think are unrealistically high levels of virus. Although airborne infection can be made to occur in a lab, there is no evidence for airborne droplet nuclei spreading EBOV from person-to-person or between non-human primates whether inside or outside the lab.

This matches my understanding, overall.

The violence in the West Point slum occurred late Saturday and was led by residents angry that patients were brought from other parts of the capital to the holding center, Tolbert Nyenswah, assistant health minister, said Sunday. It was not immediately clear how many patients had been at the center.

And as to the Liberian clinic that was raided, along with the contaominated items looted,  there are reports of "As many as 29 Ebola patients fled a treatment centre in Monrovia after a crowd broke in and looted the place"

Thank you for the clarification between what medical people and lay people mean by "airborne".  I don't think Ebola is going to be a major public health threat to the United States because if you tell Americans to stay more then 6 feet away from sick/dead people and anything that might be coming out of the sick/dead people most will be inclined to comply.  Washing your hands a lot is always a good idea, wear a mask if it makes you feel better.  The people at greatest risk are the front line health care workers.  "Hi, how can I help you?",  "I'm running a fever, feel really awful and … ACHOO!!!… I just came from West Africa."

It would be nice if Alex Jones and his ilk would stop propagating the message that true patriots should resist public healthcare measures.

Coming to an ER some were.