Dr. Marik has been suspended by Sentara Healthcare

Maybe all of this will have a positive long term outcome in that people will seek alternative solutions to their health care and take more of an interest in avoiding junk food etc.

There are various actions you can take to support Dr. Marik see the link to the FLCCC site:

How Can You Support Dr. Marik?

Contact Sentara by phone at (757) 252-9550
Contact Sentara by email at [email protected]
Share your concerns for patients to have access to ALL safe and proven treatments for COVID-19.
Support the sanctity of the doctor-patient relationship.
Letter to Sentara
Sign the Petition #WeStandWithMarik

Or… it won’t backfire, and they’ll “win”. How much of established recorded history is backward from what actually went down? This kind of thing may just be one small current example of the perpetually amnesic memory of humankind as a whole.

A doctor who is taking Sentara Healthcare to court so he can prescribe a controversial COVID-19 drug to his patients has been suspended from working in a Norfolk hospital for two weeks, according to his attorney.

I find the following wording troubling and confusing.

Sentara and Riverside Health have both banned the use of Ivermectin to treat COVID-19. Sentara has argued Marik can recommend the drug for treatment, but the doctor also wants to be able to prescribe it because he believes it can save lives.

What is the point of allowing a doctor to recommend a treatment that he cannot prescribe to his own patients?  Currently he is not allowed to prescribe Vitamin C as it is not on the approved list of medications for COVID-19.  If Dr. Marik does not win his case, allowing administrators to handcuff doctors into being unable to practice medicine will extend not just from treatments for COVID-19, but to all of medicine.  I cannot fathom why any doctor would want this precedent to succeed.  Can they not see that this could potentially backfire and they could find themselves in a situation where they will be unable to obtain adequate treatment for themselves?

*** BREAKING ***
The Circuit Court in Norfolk will hear Dr. Marik's lawsuit on the right to administer lifesaving treatments to his critically ill COVID-19 patients—medicines which Sentara Health System has banned.#CriticalUpdate pic.twitter.com/St5RmoQHFz

On Tuesday Marik’s motion for a temporary injunction was denied.

Marik’s attorney said he thinks the court’s ruling shows the judge wants more information on informed consent. In the judge’s opinion, the judge said that Marik’s position that doctors should be able to demand hospitals support their alternative treatments — even if the hospital believes they’re unsafe — doesn’t appear to fall under Virginia’s informed consent law and “could set a dangerous precedent.”

“While we are disappointed that the Court did not grant the temporary injunction, our case for the rights of doctors and their patients remains alive and well. We expect to ultimately succeed on the merits of our case at trial,” said Marik’s attorney, Fred D. Taylor.

For those who are lawyers, that article provides a link to the court’s decision:

It will take a courageous judge to rule against the establishment.  Courageous judges are few and far between due to supply shortages.

Can anyone fill in, details and links?

nyhetersverige,  Dr. Kory mentions losing his job in the FLCCC’s weekly update.  Start listening at 52:35 in https://odysee.com/@FrontlineCovid19CriticalCareAlliance:c/FLCCC-WEBINAR-111721_FINAL:b if you have that recorded somewhere.

The original video, which was a recording of their weekly zoom conference, has been replaced by a very short video.  Possibly they said too much about Dr. Marik’s case?  I don’t know the reason for the removal of the original recording.  I happened to download it onto my hard drive.  I watched my recording while doing other work to refresh my memory if that was where Dr. Kory had mentioned losing his job.

I found the video on the web: https://gloria.tv/post/Za42wBFNTkyK2N23arVniV8Af . 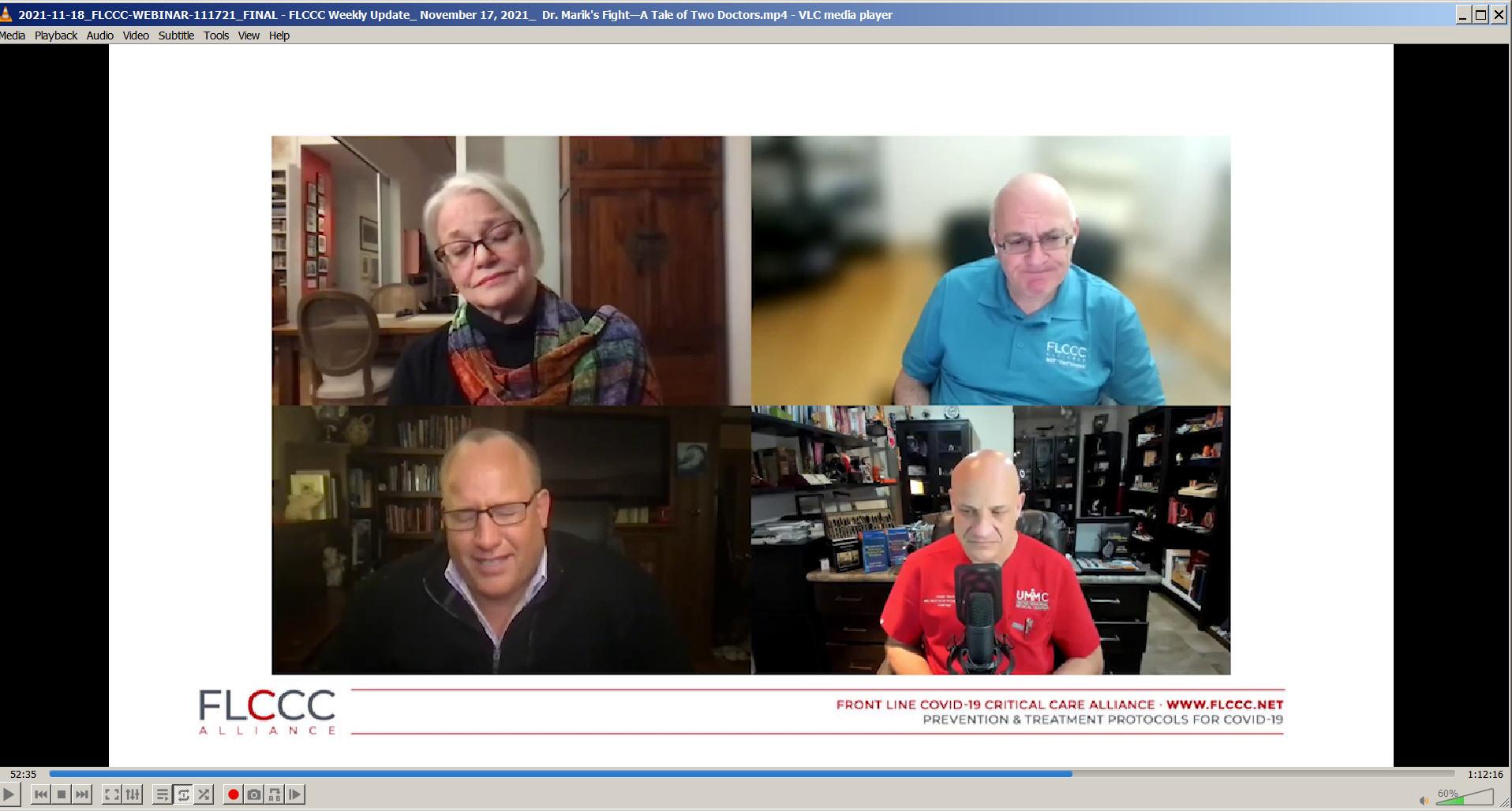