Do you have a Victory garden?

Yes….We have about 3/4 acre of garden in 3 areas. Also getting our chicks started. We are looking for an apprentice to live on our ranch…With more help we can grow more veggies for our local community. 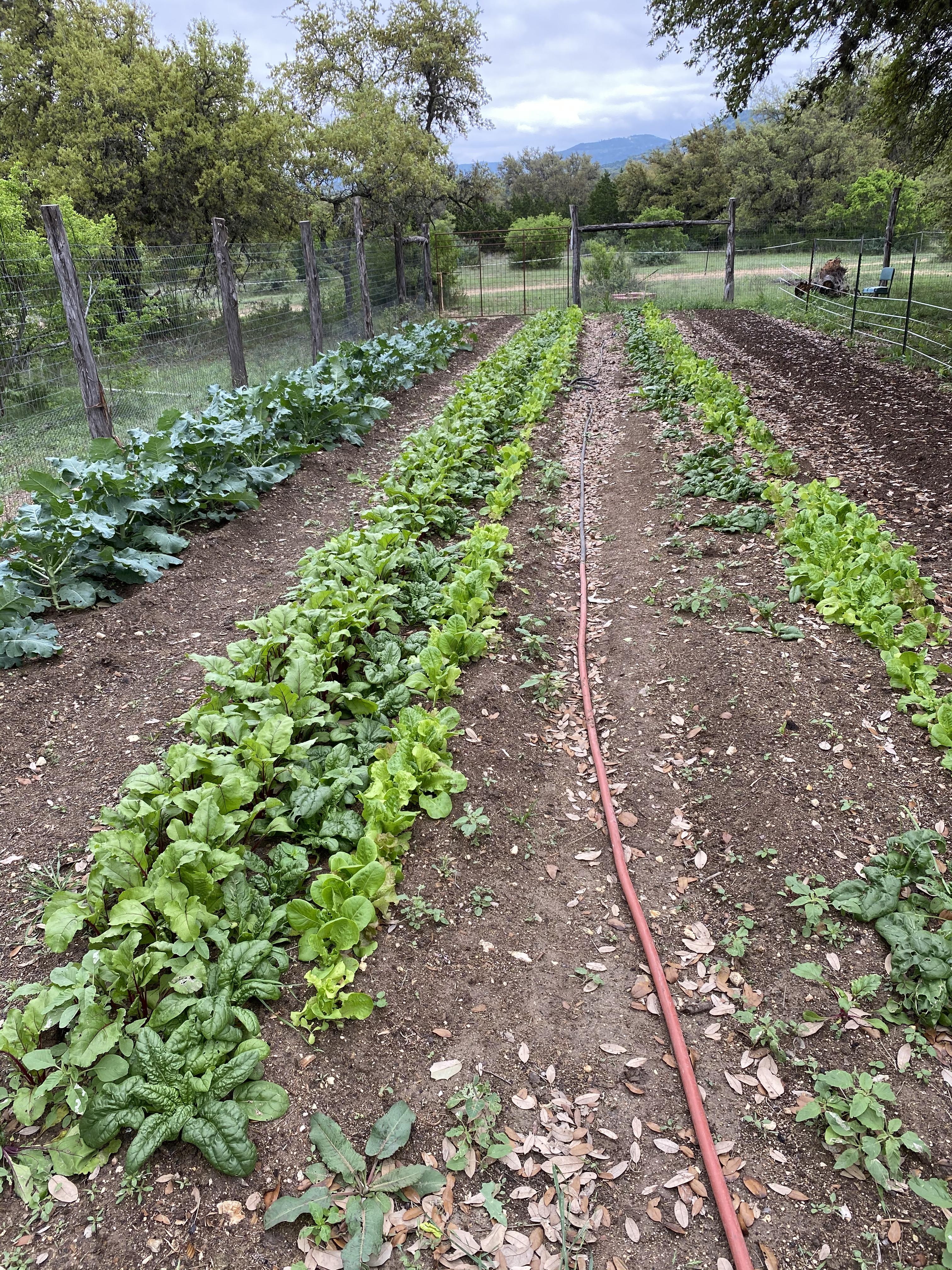 This past week we’ve tapped in to the Village water main, filled in the 4 foot deep x 30 foot long trench we dug last week, picked stones enough to create a drip-zone around the hydrant, hauled and unloaded another truck load of manure.   Each day we tried to flip at least 1 30 inch by 85 foot planting beds by hand using potato forks, fabricated a pretty good screen out of reused lumber, turned and gave a preliminary soaking to our supply of donated leaves and organic material, and had enough time left over to go for a 6-7 km ‘nature walk’.
Priorities for this week: prepare planting beds for the arrival of 100 “Kent” Strawberries; assemble and construct a three chambered composter and prepare propagation trays for plantings of many herbs and vegetables.
I’m pleased to see ‘subsistence gardening’ has been included in the BC government’s list of Essential Services; it wasn’t a week or so ago.  I’m following my own post-capitalist model in support of improved local food security. Our goal: strive to grow, harvest and preserve more of our own food and to share whatever we can with others.
We’ll see how this week goes.

It’s only April, and I’m far, far behind where I want to be already, but also far, far ahead of where I was last year at this time.   I urge everyone, whoever you are, wherever you are to get up off of your ass and participate in a meaningful way in digging, cultivating, planting and growing as much food for yourself and other as you can.

I also live in the Pacific Northwest, and have left roots in the ground with mulch over them for winter months, but then in the spring I discover the frickin’ gophers have tunneled and taken them all. I had purchased some chicken wire last year and was planning on digging a 12-18” deep trench to surround my garden plot, put in the wire and put the soil back, but I got injured at work in June (whiplash, concussion, and neck strain) which took 7 months to resolve. I had used the same strategy when I was living in Santa Barbara, because I had a lot of chicken wire leftover after not needing it any longer and I like to keep things to reuse and repurpose. The little assh**** had caused a lot of damage, and after trying many strategies, including sprinkling the scent from predators that was supposed to scare them away, yea right, not!!!; the battery, and then tried the solar powered pole things that would vibrate and supposedly keep them away. Also, very unsuccessful. But while I was researching what other possible methods, and what gophers do, I kept finding that they usually only dig down 12-18” for their tunnels. Eureka! So, dug a perimeter trench, put in the wire, voila presto magic, no more damage, didn’t loose any more crops or plants dying, and it had been especially frustrating watching from a few feet away carrots getting pulled down and disappearing.

While I was there in Santa Barbara, I had read a suggestion in one of the many books I have on food storage for an option for people unable (for various reasons) to create root cellars, to use mini-refrigerators. So, I called around and finally found a place that removed the freon before recycling them, and I think they just gave them to us after I told them what we were going to do with them. (Probably would have a cost now.) We just had to come and pick them up. Then, we dug three holes for three mini-refrigerators, placed them on their backs, had sand on hand to keep the roots and apples apart from each other. We ended up having to dig the holes twice… After a couple of successful months, it rained really hard for a couple of days, and unfortunately we hadn’t left enough space between the soil and the lip/door of the refrigerators, so when we were finally able to get out there, and opened the doors (lift it up towards you into the air away from the ground, if you’re able to visualize that), it was three smelly swimming pools (from the spoiled drowned crops) which greeted us. But, other than that setback, it worked wonders.

I have used an electric dehydrator for about 15 years now, which I love. I do have a canner in storage, but the learning curve of getting the temperatures, acidity, etc. correct in order to prevent botulism… That, on top of storing and moving them around, and having all of my dehydrated veggies in 5 gallon food-grade buckets (with the gamma seals) is a lot easier to move around as I move from one place to another…

In much of Florida, Texas and other states, all new developments in the past 20 years were mandated to under the control of a Home Owners Association.  Basically, the community is managed by certain homeowners to ensure that you don’t do something to your property that would jeopardize the value of other homes in the community.   These HOAs use boiler plate rules across the board that explicitly deny your ability to do any changes to your property without the explicit permission of the HOA.  Furthermore, the language of the rules explicitly restrict one from raising chicken, growing a raised bed garden, and even require every tree you plant or remove to be explicitly approved by a committee board.   We are talking about properties with 1 acre plus here…   Most people on the boards basically want everyone else to grow grass, and non fruit bearing trees.  Anything outside that “standard” generally gets rejected.  You must conform…

(I answered this, and the post seems to have disappeared – I’ll try to recap and if it ends up posting twice, apologies to everyone!)

So sorry about the work injury, that sounds horrible.

Wow – gophers sound like a real trial – we’ve never had to deal with them.  Possibly because, of the three places we’ve lived where a garden was possible, only one actually had ground you could dig.  The other two, including where we are now, were/are rock.  So raised beds has been the way to go.  Rabbits and raccoons are diggers too, but for some reason they were never an issue in the Richmond BC garden, and now our main foe is deer, so everything has a high fence around it.

So leaving root veg in the raised beds with a thick layer of mulch over it has worked just fine.  We’ve managed to keep cabbages that way too, covering them with landscape cloth, then mulch.  Even with a foot of snow over top, we can just lift the cloth and the cabbages are there for the harvesting.  Kale keeps well over the winter too, just sitting there – it must have anti-freeze in it’s veins.  It doesn’t grow, of course, and the leaves get leathery but are ok for soup.  And it bursts into growth in late February, so it’s a welcome harbinger.  This last, rather mild, winter the chard kept going all through too.

Last summer’s garden was a surprise.  We were away during April and May, so I figured the garden was going to be sparse for lack of planting in time.  But we came back to a forest of squash, tomatoes and potatoes, all  self-generated.  It seems I never manage to harvest all the potatoes each year, so there were more than enough in the ground to grow again.  The previous year’s tomatoes had dropped the occasional rotten one, so they self-seeded.  And the squash all grew where I had dumped some unfinished kitchen compost, just to empty the barrel.  To make sense, four varieties of squash should have self-seeded, but what came out was a different variety I hadn’t planted (or eaten!)  An acorn type, but huge like an undiscovered zucchini, with a much tougher skin so it’s kept all winter in the pantry (usually acorn squashes don’t last more than a few months storage.)  Perhaps they all reverted to some base variety from which the hybrid types were developed.

Water is an issue here, as it’s drought all summer and our well gives out by August just on household use.  So we collect rainwater during the wet months, about 14000 gallons, and that gets us through the garden seasons.

I’m definitely with you on drying and the bucket storage!

Wow, there are some really good looking gardens out there!

Here are pics of the first strawberries from the garden..not much, but it’s a start. 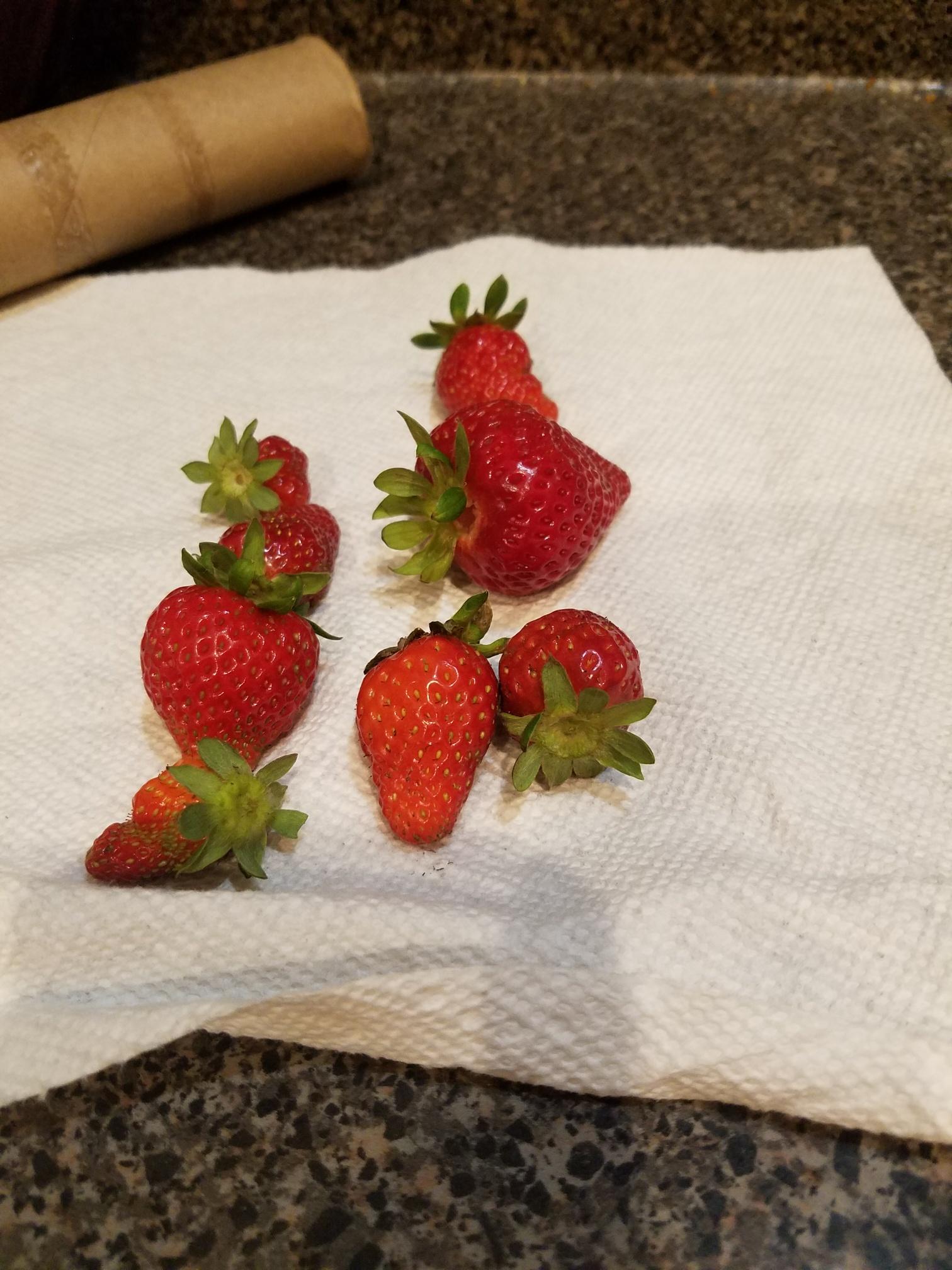 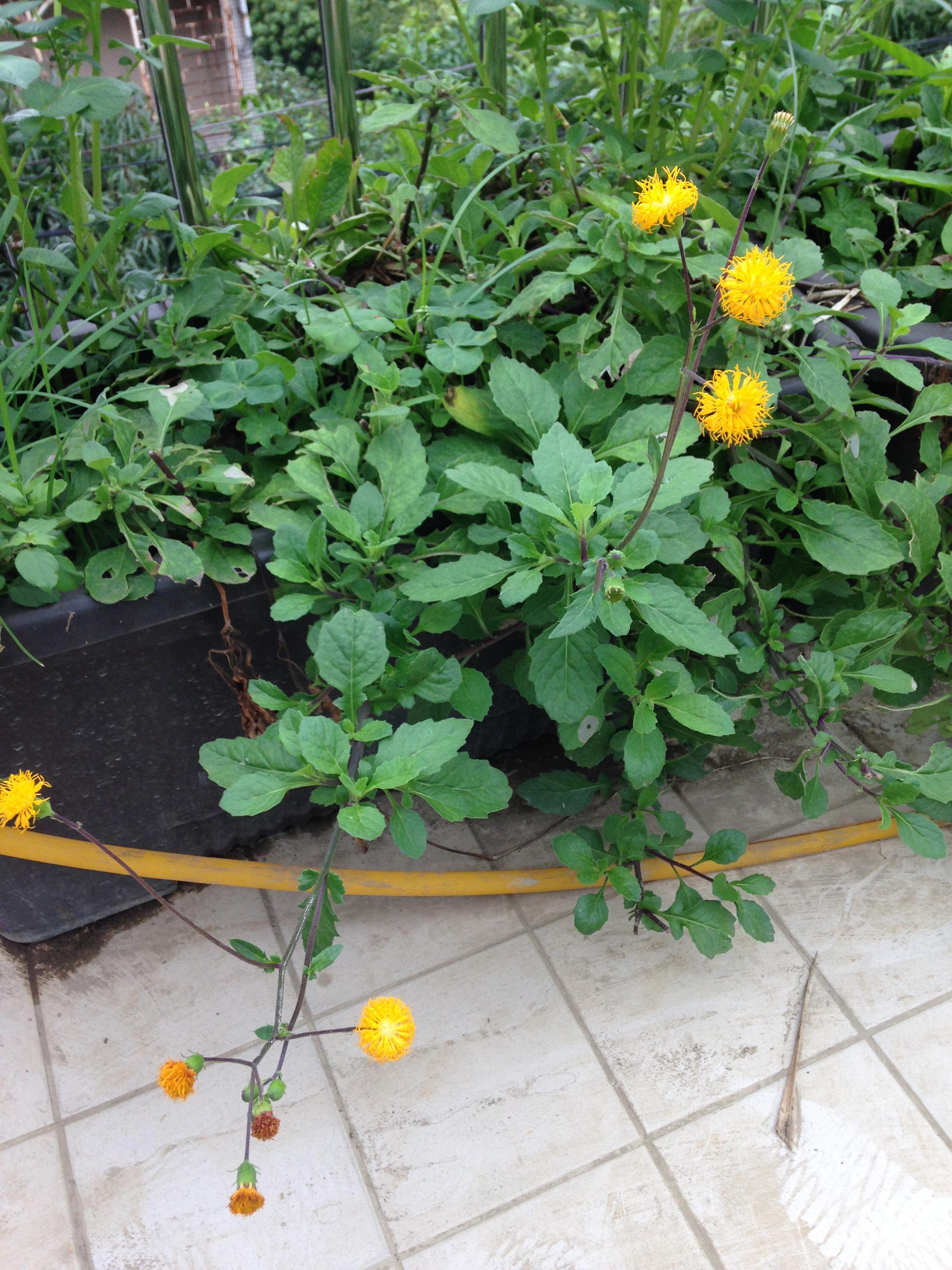 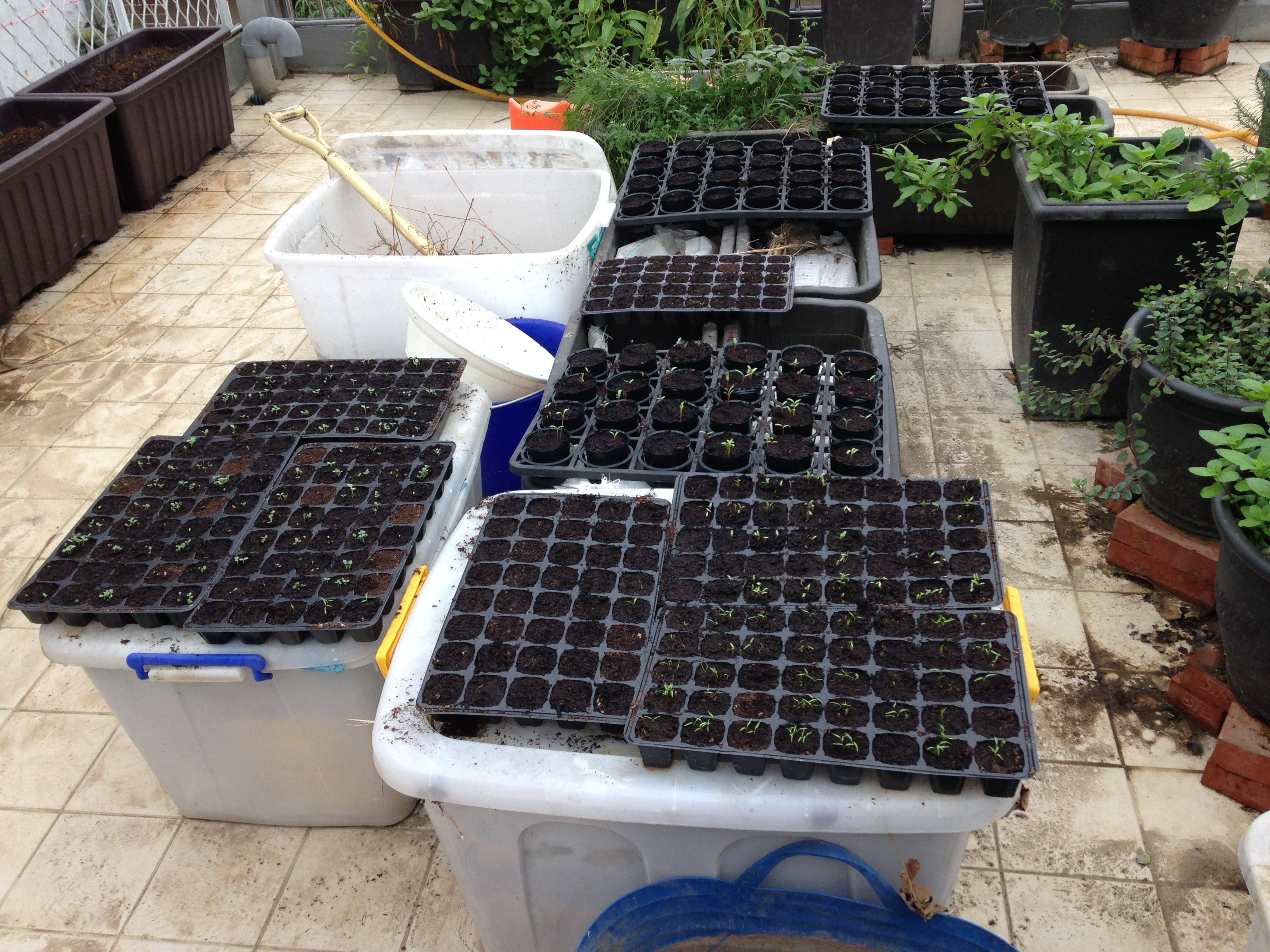 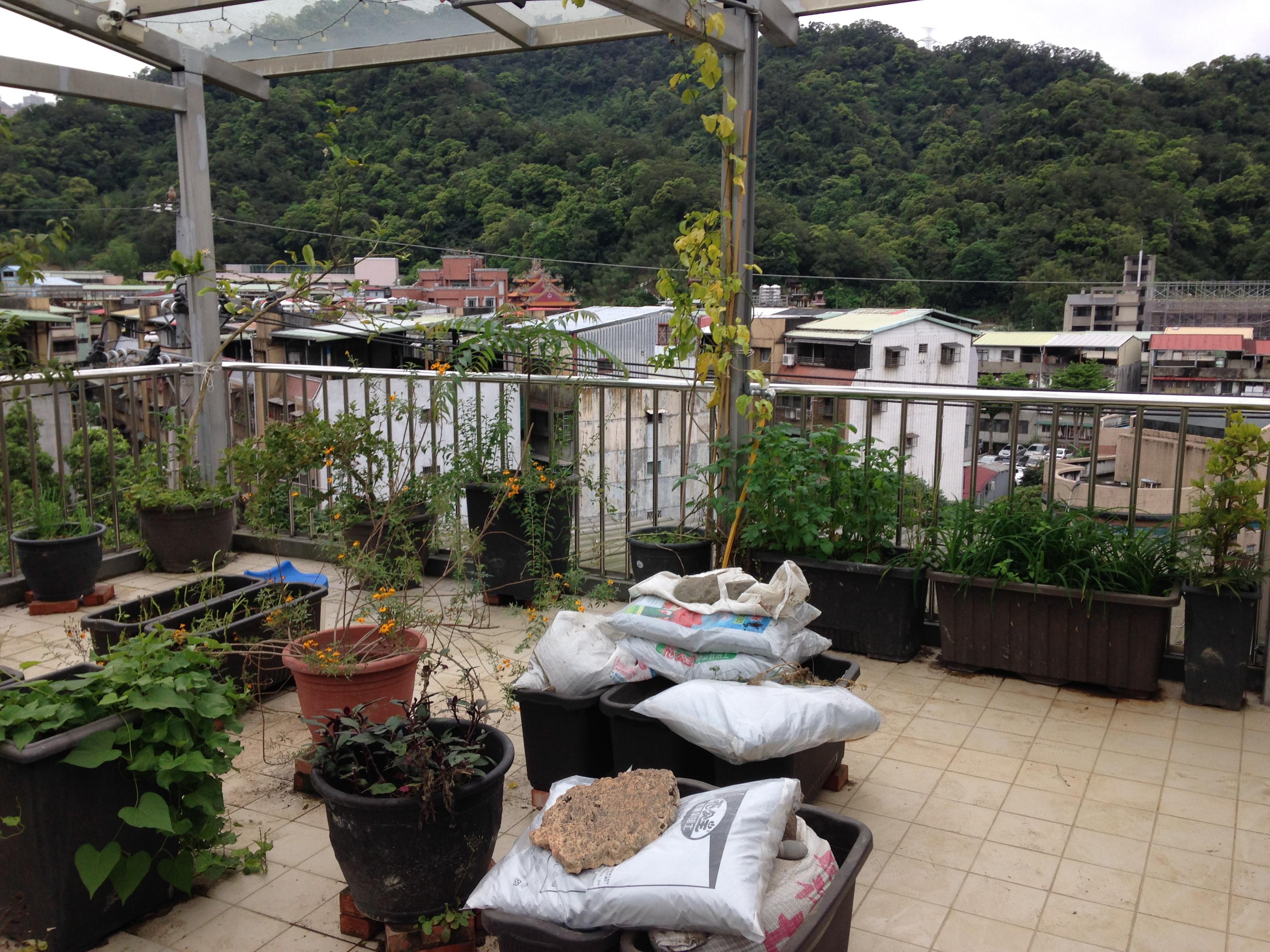 I love everyone’s pictures! Alas we have no yard but we are taking full advantage of our roof here in the suburbs of (a certain capital city on an island nation in East Asia, sorry, trying to avoid triggering the, uh, “socialist justice warriors”…). We already garden as a hobby so we just overhauled it a bit, started a whole pile of seeds and got some net strung up to the roof for climbing veggies, particularly Malabar spinach. If you’ve never grown that before I emphatically suggest you try it. It grows fast and robustly, super nutritious, lends well to sautéing with turmeric and garlic. We have a large cinnamon tree native to the east coast here, as well as a lemon tree and some mini oranges. Got a lot of peculiar local specialties, mostly greens, orange daylily, etc. 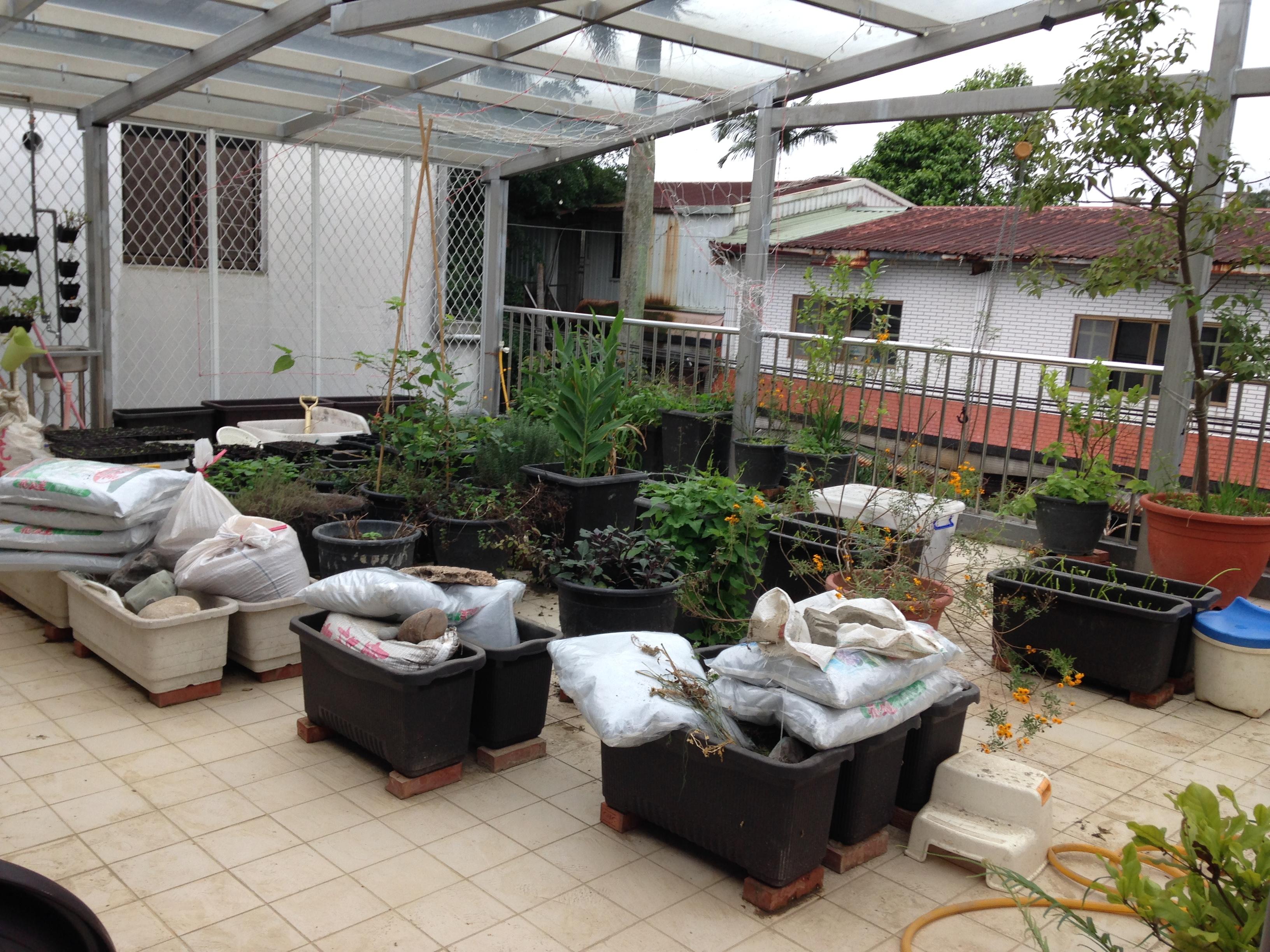 First time I’ve grown peas.  Last time I put beans in this spot in the garden, some soil-based marauder – cut-worms I think – took out the whole crop as it was just getting above the ground.  So, as peas can take being planted earlier, and this is a variety that grows 8′ tall (we’ll see…) we’ve put in a very tall trellis and planted the peas in dixie cups with the bottoms cut out.  Fingers crossed.  Here they are just planted.  Will report back when (and if) they make it up the trellis.  If they really do go up 8′ it’ll take a step ladder to harvest them!  (the rest of this bed is potatoes – they’re supposed to like peas.  If I overhear any arguments I’ll let y’all know.) 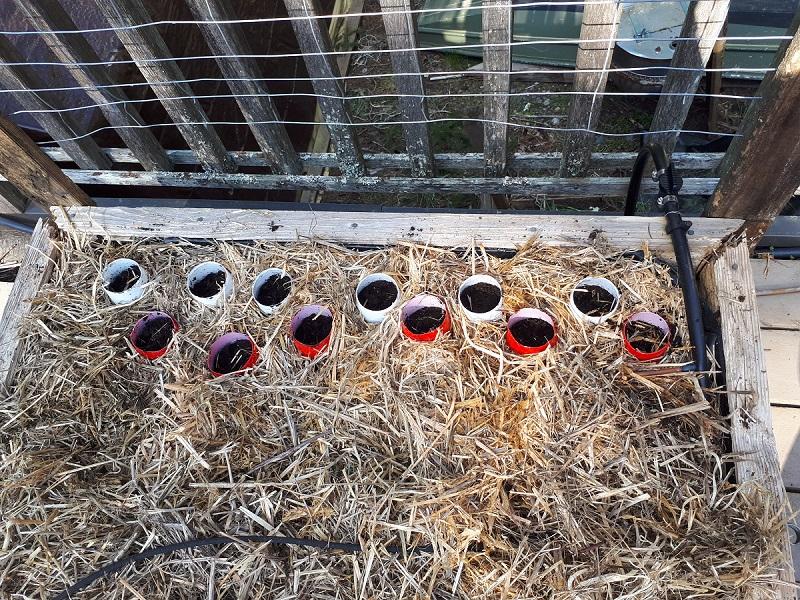 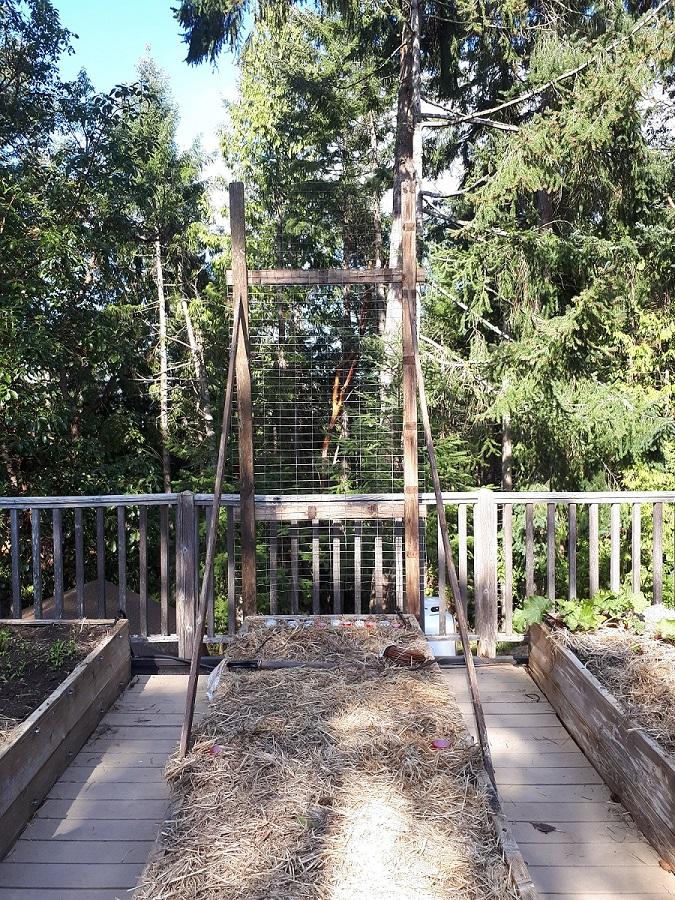 Things are looking good in the improvised garden: 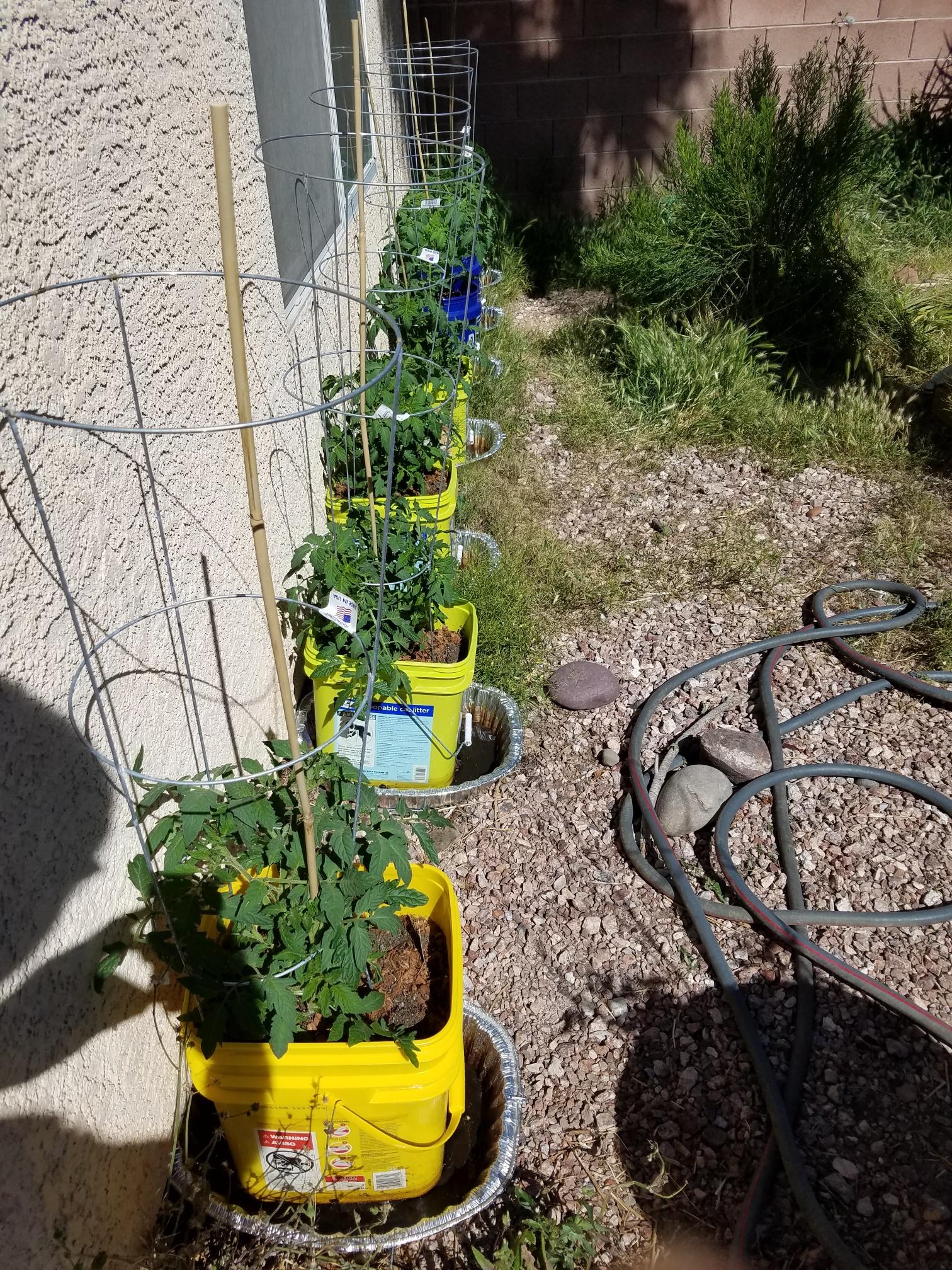 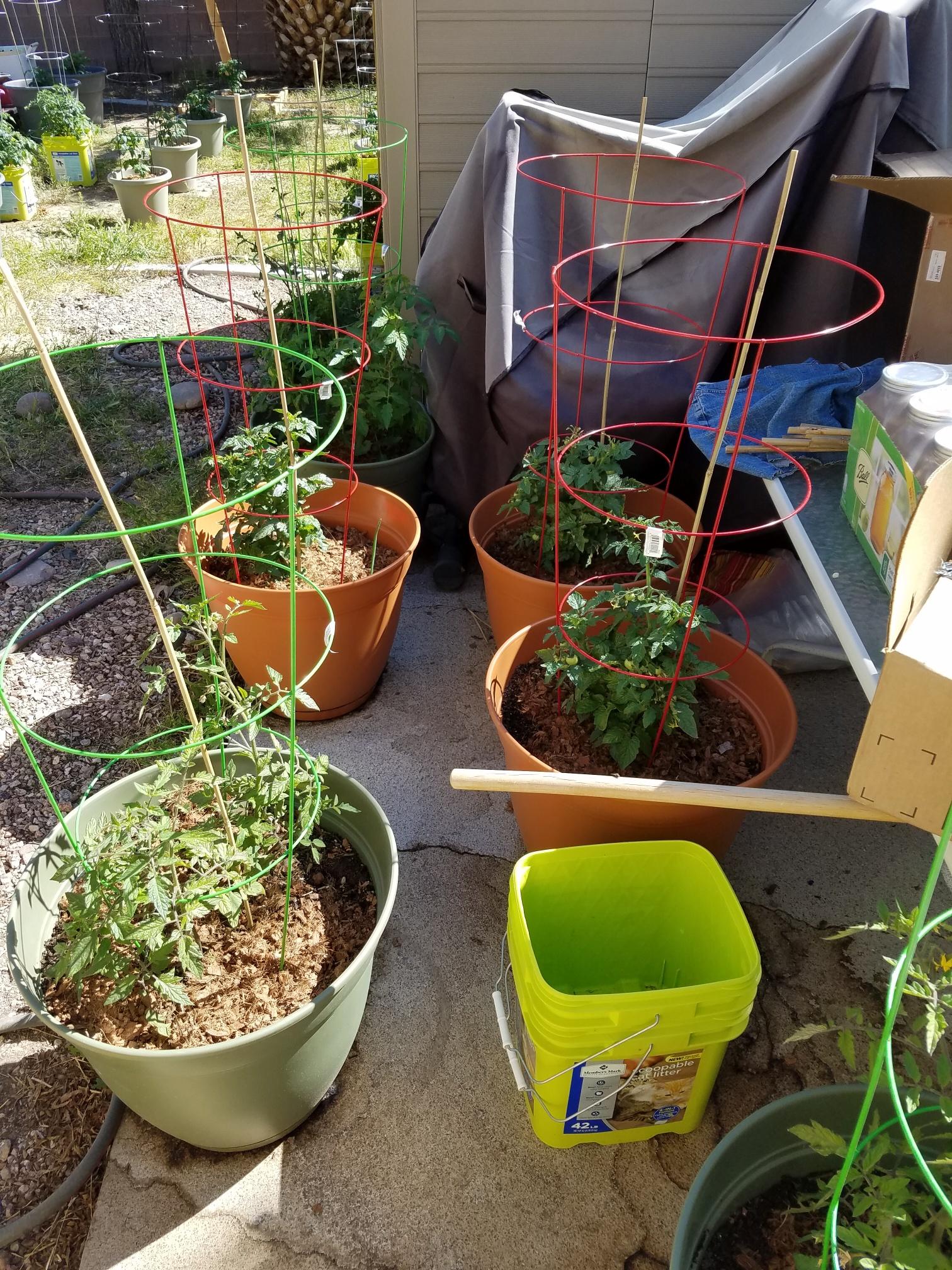 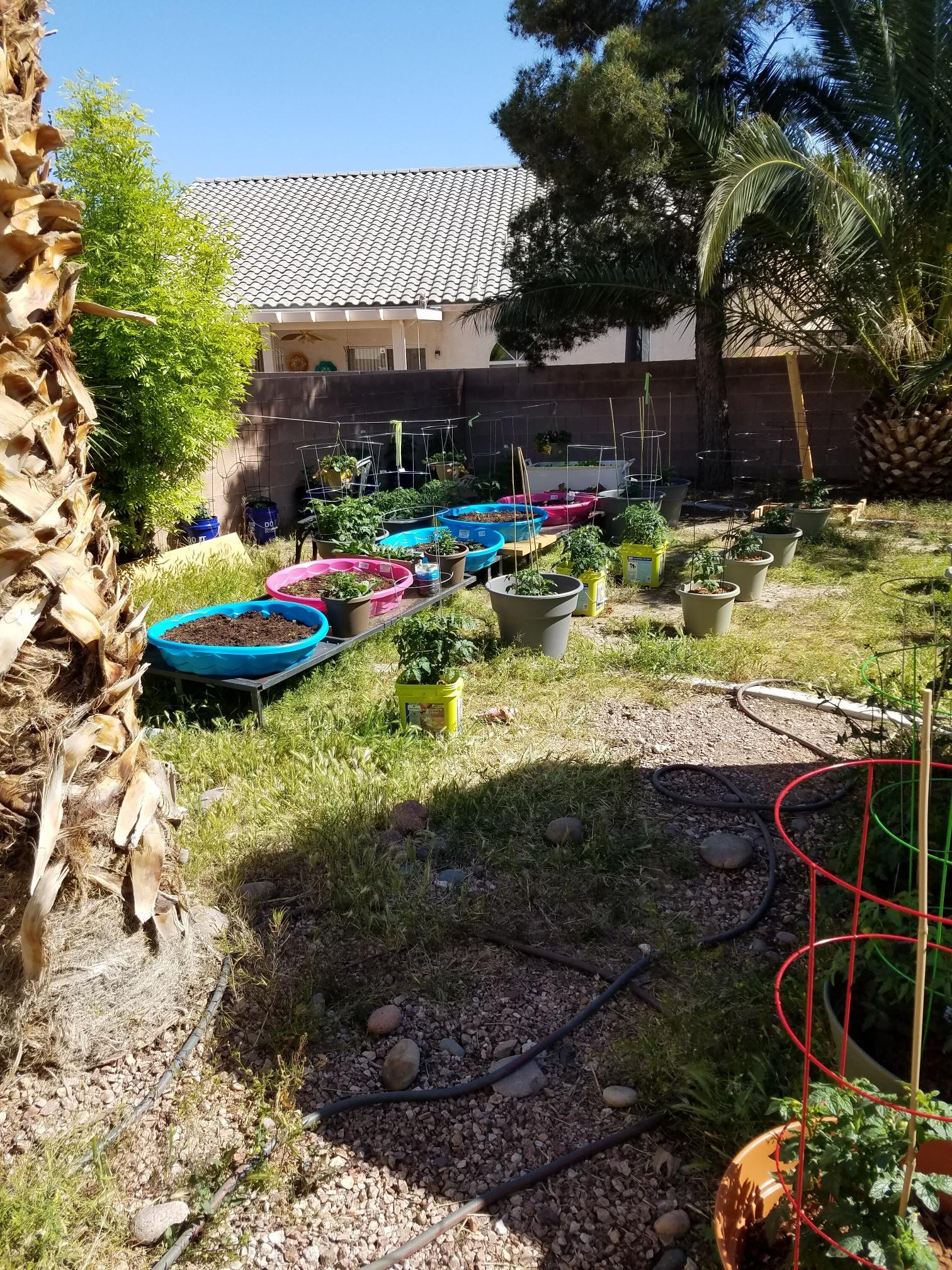 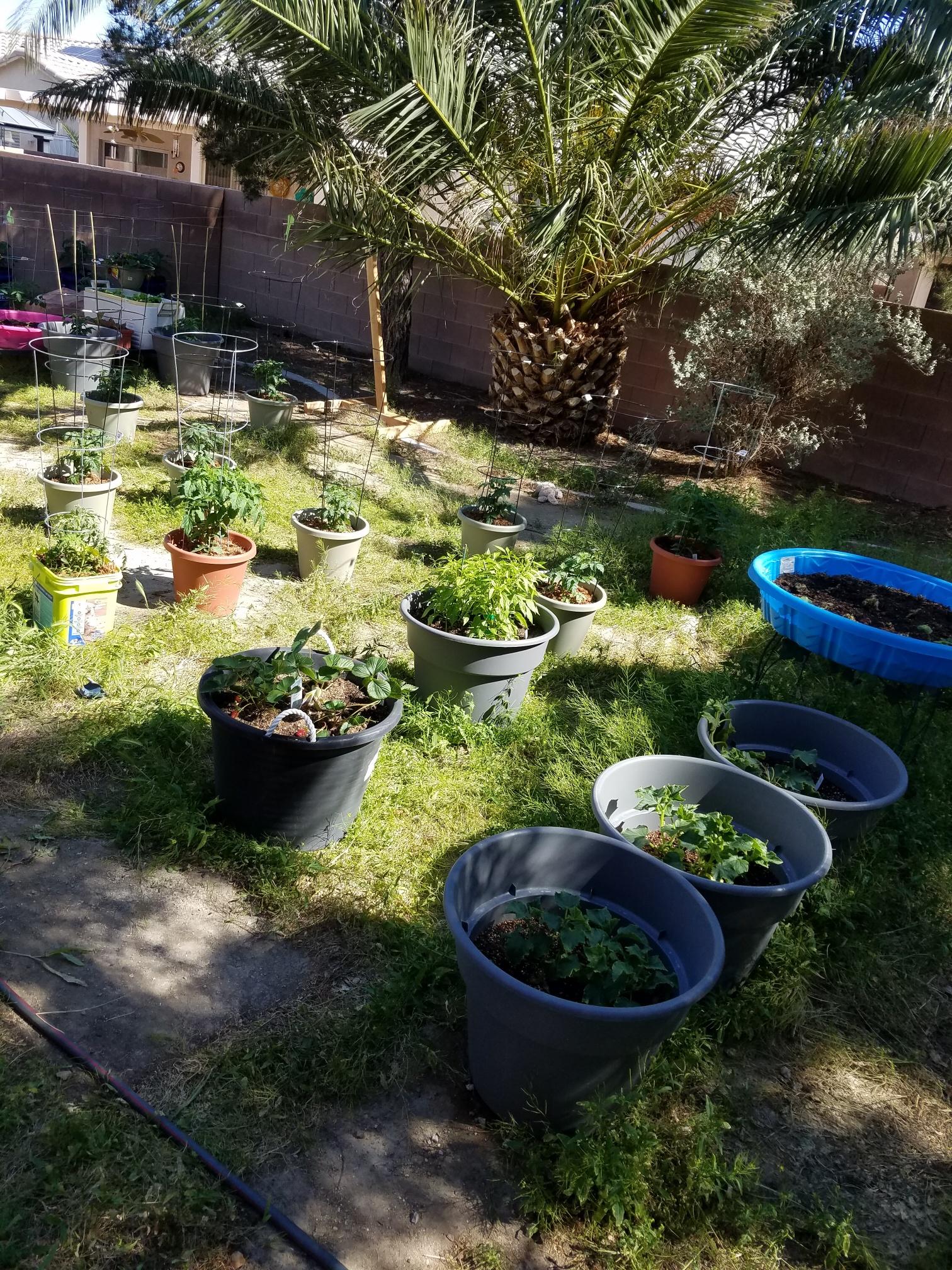 So, how are the other gardens going?

If you are thinking about starting one, there’s no better time then now…

I am so envious of people with a garden. We rent a flat and can’t grow anything more than a few herbs on the windowsills. We do have quite long windows but what we can grow isn’t usually enough to feed our pets.

I think my boyfriend may stop me even doing that soon as the past 2 years we have been plagued with black and green fly.  I bought some cheap window screens but it hasn’t stopped them getting in.