There is a significant difference in the case fatality rate between the various US states (for my purposes, I am defining CFR as the percentage you get when you divide the number of reported COVID deaths in a given state by the number of reported COVID cases).  To illustrate the most extreme difference, Connecticut is just less than 10% CFR while Utah are around or under 1%.  I’ve noticed that states with Democratic Governors tend to have lower CFRs than states with Republican Governors, although there are exceptions to this.  Based on my crude calculations, overall, states with Dem Governors have around a 2% lower CFR than states with Republican Governors.  Does anyone know why this the case?  Is there any evidence on why this is happening?

CFR’s are drastically effected by testing.  A much more straightforward metric is deaths/million population.  When you look at Worldometer, view just the US by States, and sort on death/million… you will see that of the top 10 States (which include the District) 9 of them are Democrat led.  Only MA has a (nominally) R Governor.  This mortality outcome in part is due to the horrific practice by NY/NJ/PA of putting sick people back into nursing homes that were unprepared to handle them safely.  In any event.. here is the data.. it does not lie; 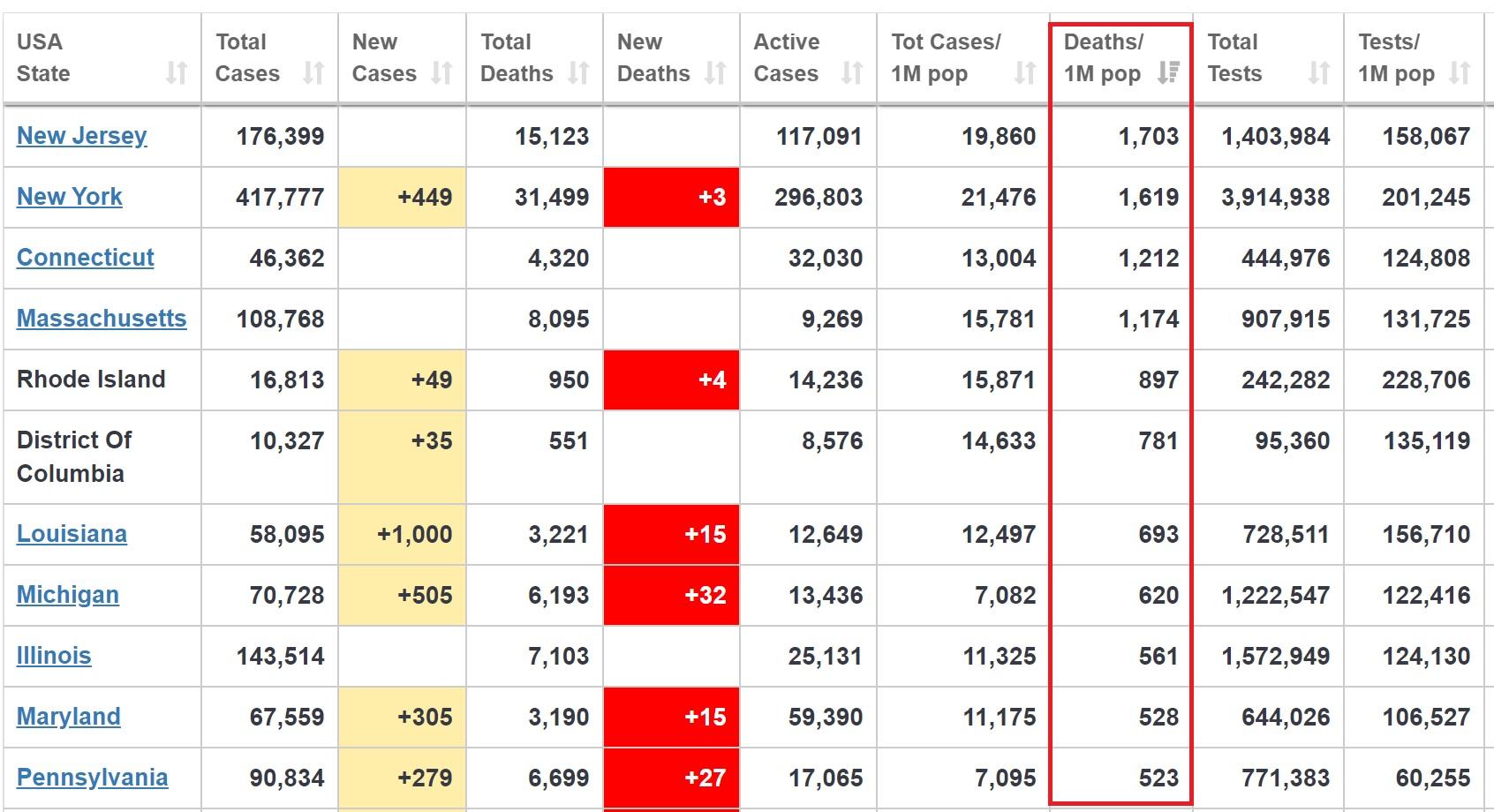 Thank you for your response!  Just a couple of follow up questions.  First, can you explain your statement that CFR is affected by testing?  How so?  I want to make sure I understand your reasoning.

Second, if the disparity is due in part to decisions by NY/NJ/PA Governors to move seniors from hospitals to nursing homes, that would not seem to explain the significant disparity between states like Conn. and Utah or Florida?  Are there other explanations that you are aware of?

Thanks again and be well.

These days, anyone going into the hospital for any reason gets tested (at least, according to I guy I read; he’s been tested every time he goes in for “normal bloodwork”; 5 times last 2 months).  In the old days, when testing was scarce, lots of people didn’t get tested, even though they had symptoms.

So, with that overenthusiastic testing policy, you will pick up a lot more asymptomatic people who were there for something else, but happened to be positive.

The number of positives showing up didn’t change, your new policy of testing resulted in you detecting everyone who was positive, whereas you didn’t see them before due to your old testing policy.

Bottom line: you test everyone, you find more positive people, and that drops CFR, since “a positive test” = “a case”.

I’m guessing the hospitals get paid by Uncle Sam for each test they do.  So they are “extremely motivated” to test you.  The rapacious US sickcare system never misses a chance to make a buck.

This is worth a read;

I don’t say this is the only factor differentiating the death rate in States.. but it’s certainly an important factor.

CFR is not affected by testing, at least at the levels of testing testing we have. The ratio of negative to positive cases in tests is about 20. (20 neg 1 pos) . so we are not bottlenecked by testing. Also deaths per million is a terrible metric – India has the lowest mortality rate per million , just because  it has billion and half people , it only means that the  disease has lot more people to burn through and disease is in beginning stages. IMO , CFR is a good indicator of better management of clinical care . Population  Mortality rate means nothing unless entire population is exposed or disease has been gone ( like new zealand).

This does not seem like a very strong argument;

Also deaths per million is a terrible metric – India has the lowest mortality rate per million , just because  it has billion and half people , it only means that the  disease has lot more people to burn through and disease is in beginning stages.

I agree that if two countries are at different stages this matters.. but I don’t know why this would be the case India vs. other countries.  Do you have any kind of data to back up this contention?  Deaths per million is a metric that is not affected by how much testing is going on.. therefor it is the best apples-to-apples metric that we have.

As well, the idea that India has, “a lot more people to burn through” doesn’t make any mathematical sense.  Deaths per million people doesn’t care how many million people you have.. I think you are arguing from some kind of gut intuitive feel that is disconnected from any real sense of the math.  Do you have any grounding in math/science/engineering?

CFR is not affected by testing

Case fatality rate is total deaths divided by total cases x 100.  Total cases (or just cases) is literally in the math.  It absolutely affects the CFR.  More testing decreases the CFR by adding more cases of people who are mild and/or asymptomatic.  This is simple and well accepted.

India happens to have a low CFR in part because they adopted hydroxychloroquine early and often.  They use if for prophylaxis for front line medical workers and first responders.   They were never cowed by WHO when WHO stopped studies on the weight of the fraudulent Lancet study.

There is a difference between case fatality rate and infection fatality rate.  DaveDD helped me out with this one a few months back.

A case is “a positive you know about” that shows up for testing and possible treatment.  An infection is all the cases, everywhere; the ones you know about, and the ones you don’t.  If you test, or don’t test, the IFR remains the same.

But definitionally, more testing = more cases, which will drop the “case fatality rate”.

More, less, or no testing won’t change the “infection fatality rate”, since IFR represents ground truth.  How many infections lead to death – that’s the IFR.

The IFR can be a difficult number to come up with, but you can back into it by doing antibody testing.  Although from a recent article I read, there were a number of people (in New Jersey) that were, say, living with family members who tested positive, but they themselves never got symptoms, and came up negative on the antibody test.  Doc was so surprised he tested them again.  I think it was 29:30, still negative.

Maybe some people are just immune in some way.

@JImH
Please see the data above, the disease has not even peaked in india (first wave), using deaths per million you can draw false conclusion that india is managing the disease 30 times better than US. That is a very misleading. Some states/countries have low deaths per million because of the large denominator of population and disease still being in the early wave.

More testing decreases the CFR by adding more cases of people who are mild and/or asymptomatic.  This is simple and well accepted.

If you are testing randomly or entire population by govt, perhaps more testing will uncover more mild/asymptomatic cases – for example, china tested entire wuhan and beijing. In that govt mandated testing scenario, People did not really have choice not to be tested and it will uncover  asymptomatic cases. However, In USA – testing is voluntary and most people do not get tested unless they have symptoms or required for some mandatory medical procedures.   In voluntary model, As long as everyone who needs a test gets a test  – CFR will not increase with testing .    US has done 34 M tests and has 2.6 M positive cases – the negative cases far outweigh the positive cases. Even, assuming random testing ( instead of voluntary testing) –  10% more tests does not equate to 10% more cases, but only 0.8%  of new cases that contribute to CFR. It appears “more testing” is usually a face saving phrase for managers . This might be partly true in March when access to testing was very limited, but not anymore when anyone who has a symptom can get tested.

But definitionally, more testing = more cases, which will drop the “case fatality rate”.

The relationship is not that simple, at the current testing rates for every 100 new tests only 6 cases contribute to the denominator of CFR (i.e cases) . with the voluntary testing, more tests means more people who either have a disease or disease symptoms. It is the disease that is driving people to get tested and not the other way around.