Came across some interesting links relating to coronavirus and mixing it with HIV, which was done in the Wuhan Institute of Virology in 2010!

China was subjects to a SARs outbreak in 2002-2003 and the Wuhan facility is quite obviously not a bio-warfare facility.

First, the Wuhan facility is tiny. Most facilities are often 100+ acres and surrounded with some of the most, and meanest security kilometers from “the action”.

Second, it’s on a city block! That is something that no nation does. So what is that site?

Well, I would surmise, particularly reading your first link, that’s its a diagnostic and public health facility. Does this make it anymore of a bioweapons lab?

Most certainly not. It’s more like a service center for cars where the BioWeapons Facility (a WHOLLY military operation BTW, which Wuhan is NOT) is the auto manufacturing plant.

Mickr, the dots just don’t connect for me here. At best the claim that China did this is quite iffy IMO, even by accident.

Some might makes the claim “well, the Chinese just are not as technically sophisticated as us”.

That would be true, if today were Feb 2, 2001. But I work in a very high tech field and deal with Chinese engineers and scientists and they are extremely methodical, almost OCD compared to a lot of western cultures. They are very sophisticated technology-wise and it would be to our own demise to pretend otherwise.

However, with so much conflicting information bombarding us on a daily basis, I would chock this one up to something other than what it appears to be. Iffy at best, rumors about this being ground zero of a bio weapon though? Just does not pass my smell test. It does seem to me to be an excellent opportunity for nefarious government actor of a certain country hostile to China to smear them via insinuation, factual distortions, and inuendo, doesn’t it?

Our foreign policy has never been as white as the driven snow, and with each passing decade it’s getting worse and worse. THAT scares the hell out of me.

Finally, I would EXPECT China to be doing public health research on corona viruses given that they did have a potentially devastating outbreak of SARS a decade and a half ago. That does make complete sense and is a very rational response by Chinese public health officials to order research on the virus family.

Followup. One of my favorite quotes, and I know plenty!, is from Aristotle:

It is the mark of an educated mind to be able to at least entertain an idea without necessarily accepting it.

So with that said, the possibility of a bio-engineered Covid-19 IMO is certainly possible. But ask yourself this.

Qui Bono? To who’s benefit would this particular strain be? Certainly not the Chinese. I mean SE Asians express the ACE2 receptor in the lungs at a far greater concentration than non SE Asians. Why would they engineer a virus that COULD be more infectious to themselves than others.

So, let’s suspend disbelief for a minute and consider this. Who would benefit from a major epidemic in China (who has been hit by a lot of them BTW in past years) and how would they benefit?

Not saying this is so. Remember, “entertain an idea”. That way one does not become myopic with the silly practice of summarily dismissing unpopular ideas. But God have mercy on us all if a western nation did this for perceived geopolitical advantage because you know why?

It would be genocide and WW1 and WW2 were started for far less grievances, perceived or real.

Kinda interesting that this virus struck literally on the VERY WORST day of the year for transmissibility in China, Chinese New Year. Odds of that are 1:365 alone.

” The evolution of 2019-nCoV remains elusive. We found 4 insertions in the spike glycoprotein (S) which are unique to the 2019-nCoV and are not present in other coronaviruses. Importantly, amino acid residues in all the 4 inserts have identity or similarity to those in the HIV-1 gp120 or HIV-1 Gag.”

and from the 1st link I posted

“In this study, a human immunodeficiency virus (HIV)-based pseudovirus system was employed to address these issues. Our results indicated that the SL-CoV S protein is unable to use ACE2 proteins of different species for cell entry and that SARS-CoV S protein also failed to bind the ACE2 molecule of the horseshoe bat, Rhinolophus pearsonii. However, when the RBD of SL-CoV S was replaced with that from the SARS-CoV S, the hybrid S protein was able to use the huACE2 for cell entry, implying that the SL-CoV S proteins are structurally and functionally very similar to the SARS-CoV S. These results suggest that although the SL-CoVs discovered in bats so far are unlikely to infect humans using ACE2 as a receptor, it remains to be seen whether they are able to use other surface molecules of certain human cell types to gain entry. It is also conceivable that these viruses may become infectious to humans if they undergo N-terminal sequence variation, for example, through recombination with other CoVs, which in turn might lead to a productive interaction with ACE2 or other surface proteins on human cells.”

Not saying it’s a bioweapon, but perhaps research that somehow got out?

The paper from 1999 National Intelligence Council, expresses some degree of concern that China is hiding offensive WMD programs…. 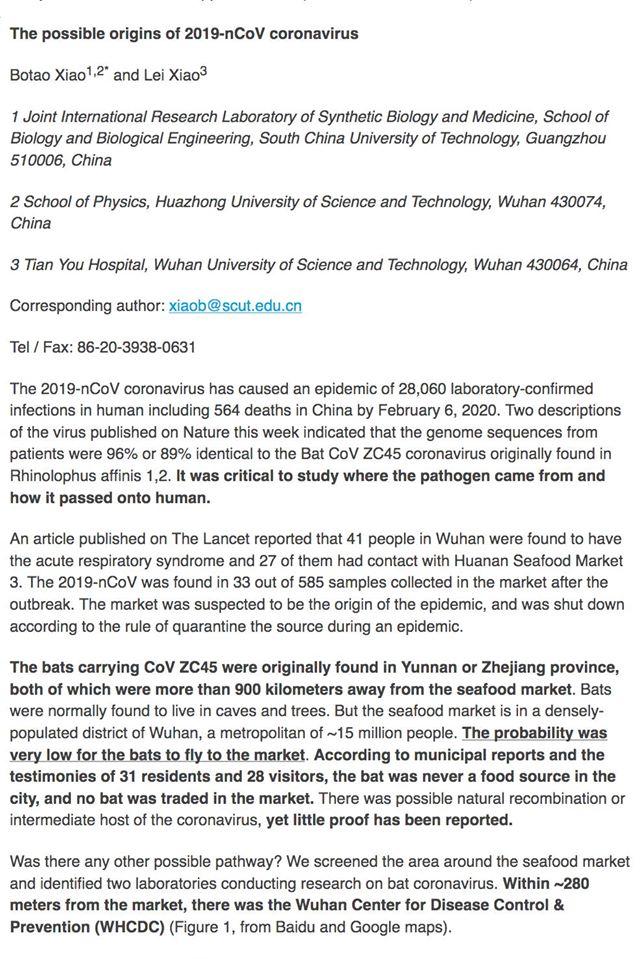 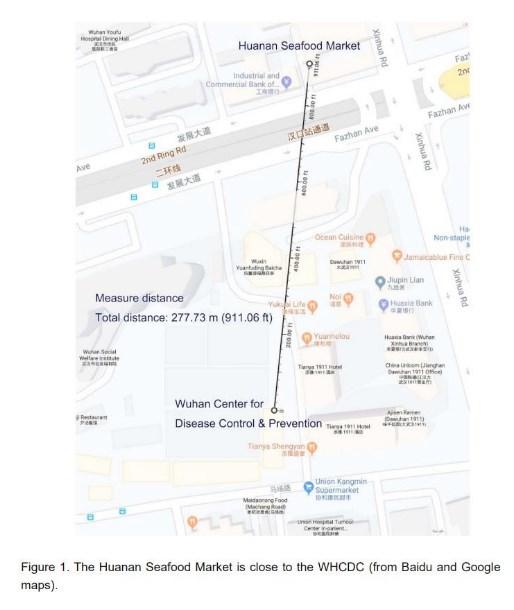 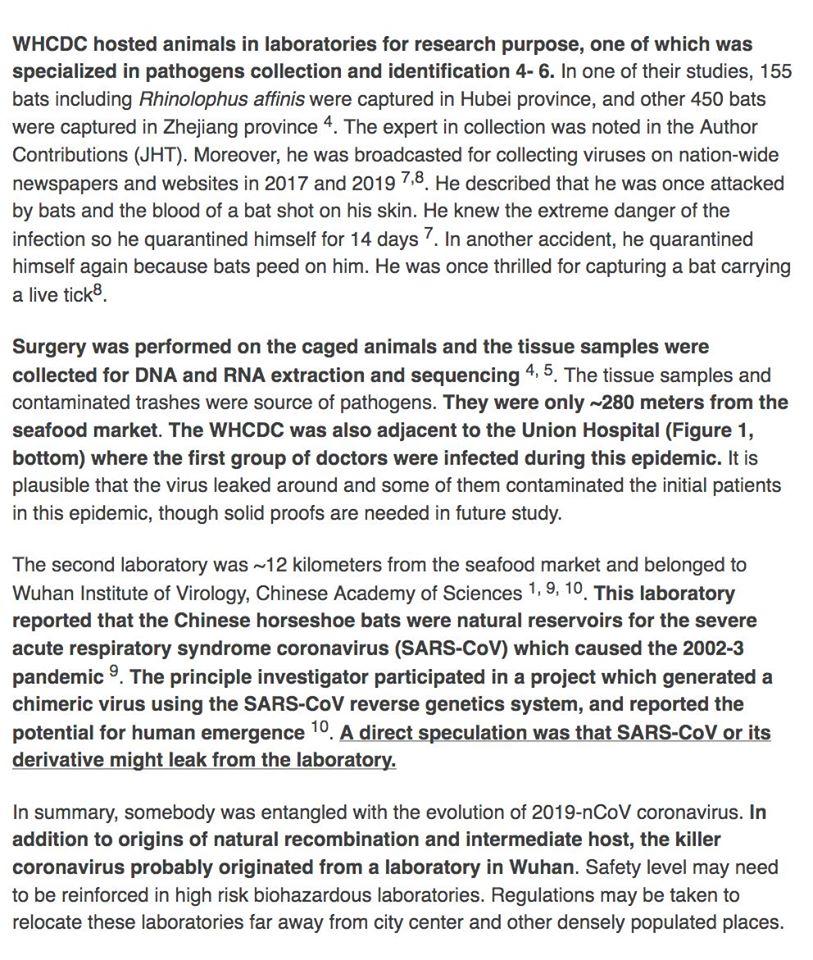 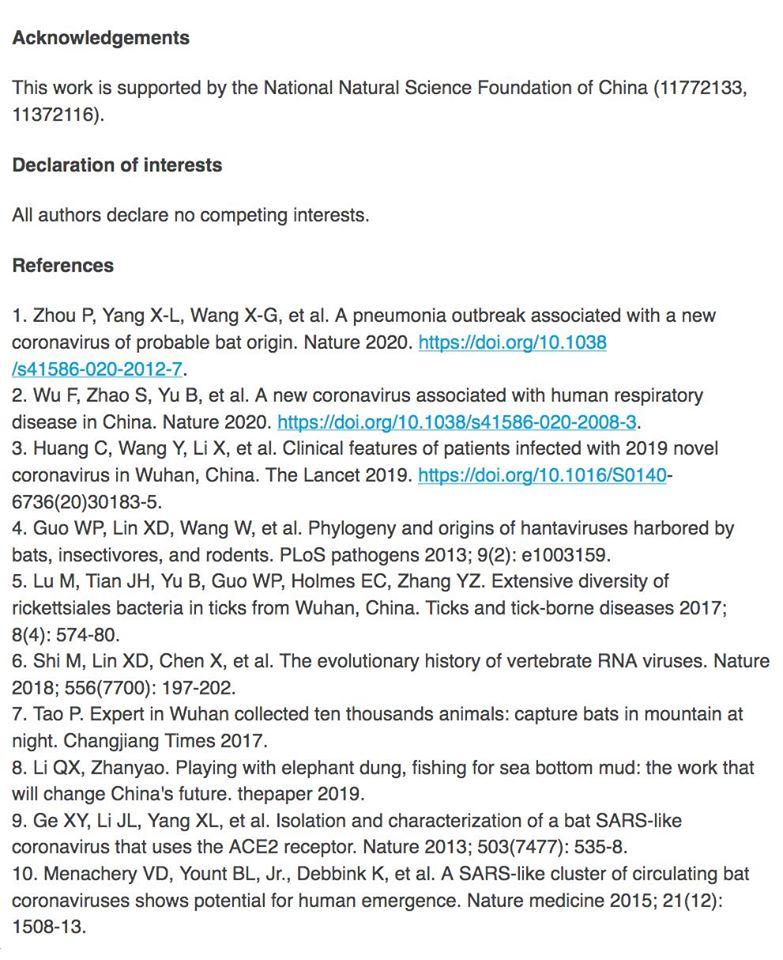