David Legates, a longtime climate change skeptic, has been appointed by the Trump administration to help run the National Oceanic and Atmospheric Administration, the federal agency charged with producing “much of the climate research funded” by the government, The Washington Post reports.

California & Oregon are burning and Storms in  gulf, nothing to see here – move along. /rant: @chrismartenson, this is how integrity is broken and managers are assigned to jobs where they do not belong.

If you don’t know anything about “climate science set B” — the one that’ll often make you lose your job and career if you embrace or merely choose not to ignore — then check out this post. Integrity is massively broken, but not in the way you think.

tatagiri, you now know — I hope you agree — that there is a totally false “scientific consensus” around HCQ and all the other effective treatments for the coronavirus, which is pushed at the expense of thousands upon thousands of lives, as well as a drastic reduction in our freedom, yes?

But but but.. ‘the science is settled’.    the medieval warming period never happened(?). The norse settlers in 1100AD had cattle in Greenland and Iceland had trees

I think it is really interesting that we came across climate change right as civilization started running low on fossil fuels.

I mean, if I were in charge, and I wanted to get civilization (and the populations of the industrialized world) to avoid starting an earth-shattering war where we all fight over the last few drops of oil, I might ask them to – “look!  Squirrel!” – at “solving the climate change problem” instead.

“You must stop using fossil fuels – not because we are running out (which, we are) – but because they are destroying the earth!  In TEN YEARS!!”

[Curiously, thats right around the time when shale runs dry.]

And of course anyone who brings this whole relatively curious coincidence up – is of course a climate change denier.  Anti-science.  Conspiracy theorist.  That sort of thing.

And that all that fuel saved to “fight climate change” is (helpfully) now available to be used in that fleet of private jets that the billionaire class uses to run around in.  Just a coincidence, I’m sure.

I do notice that the same group that is all in on climate change is also all in on “HCQ will kill you.”  And on pandemic treatment protocols that sum to:  “wear a mask, hide in the basement, wait for the vaccine.”  Same group that says we won’t get back to normal until we “vaccinate the whole world.”

And while we’re at it, they want to:

“Globalize your job, Open Borders (to debase your wages), provide Medicare for All, a Universal Basic Income (as long as you follow the rules), all funded by MMT.”

Anyone seeing a pattern here?

Good old regulatory capture. The orange clown is so adept at this art. The art of the ‘deal.’

There is zero doubt that the science is, for the most part, settled on carbon emission caused global warming.  Big oil  has lobbied and inserted propaganda into social and mainstream media, for decades.

They muddied the waters really well. Looks like they’re finally losing the battle for the hearts and minds of the people, with the fires in California, though. (except for the ‘awake’ types LOL)

Sweet. I invested some of my cash in solar and wind just over a month ago. It’s doing great.

“There is zero doubt that the science is, for the most part, settled…”

“HCQ will kill you.”

“The protests are mostly peaceful.”

Trust in institutions is in short supply these days.

I am very, very, happy to see the appointment of any person, who knows enough to not blame man-made CO2 emissions for causing “Climate Change/Warming.”

First, the Earth’s climate is NOT driven by CO2 at all.

Second, Man’s ENTIRE contribution to atmospheric CO2 is only about 18 ppmv, of the total 411, or so, ppmv present.

Third, The ENTIRE contribution of the U.S. to the atmosphere is only about 4 ppmv.

Fourth, You can totally eliminate 100% of U.S. created CO2, and this would have ZERO effect on the Earth’s climate.  Zero.

Fifth, In fact, the natural fluctuation of  atmospheric CO2 per year is about 6 ppmv.  This means we experience a six ppmv swing in CO2 levels every year, 2 ppmv MORE CO2 than all the CO2 created by mankind from the U.S..

Sixth, We could remove the ENTIRE amount of  man-made CO2 (18 ppmv ) from the current average CO2 levels and reduce the total volume to just 393 ppmv.   So, imagine we exterminate ALL of mankind and remove ALL human created CO2 from the atmosphere and achieve a CO2 level of 393 ppmv.  Do you think this would cause a dramatic cooling of the climate?  Do you think reducing the CO2 from 412 to 393, would make a difference in our climate?

No.  It would not…not in the least.  How do we know this?  Because we lived on the Earth while the average CO2 levels WERE 393 AND LESS!!   The climate paid NO attention at all.

Seventh, The Earth’s climate is cooler now…right now…than I was just 4,000 years ago, and MUCH cooler than it was just 6,000 years ago…when this current inter-glacial period reached the hottest climatic temperatures it shall ever witness.  Fact, is we have been cooling down for over 6,000 years….

Eighth, …and I’ll stop…, The energy absorbed by CO2 is exactly the same frequency as is absorbed by WATER VAPOR…of which there is so much…it simply overwhelms the ability of the CO2 to even get a chance at doing so.  Plus, CO2 RADIATES ITS ABSORBED ENERGY IN ALL DIRECTIONS, NOT JUST BACK AT ITS SOURCE.  If you are warm at night, it is because of water vapor..not CO2..for example. 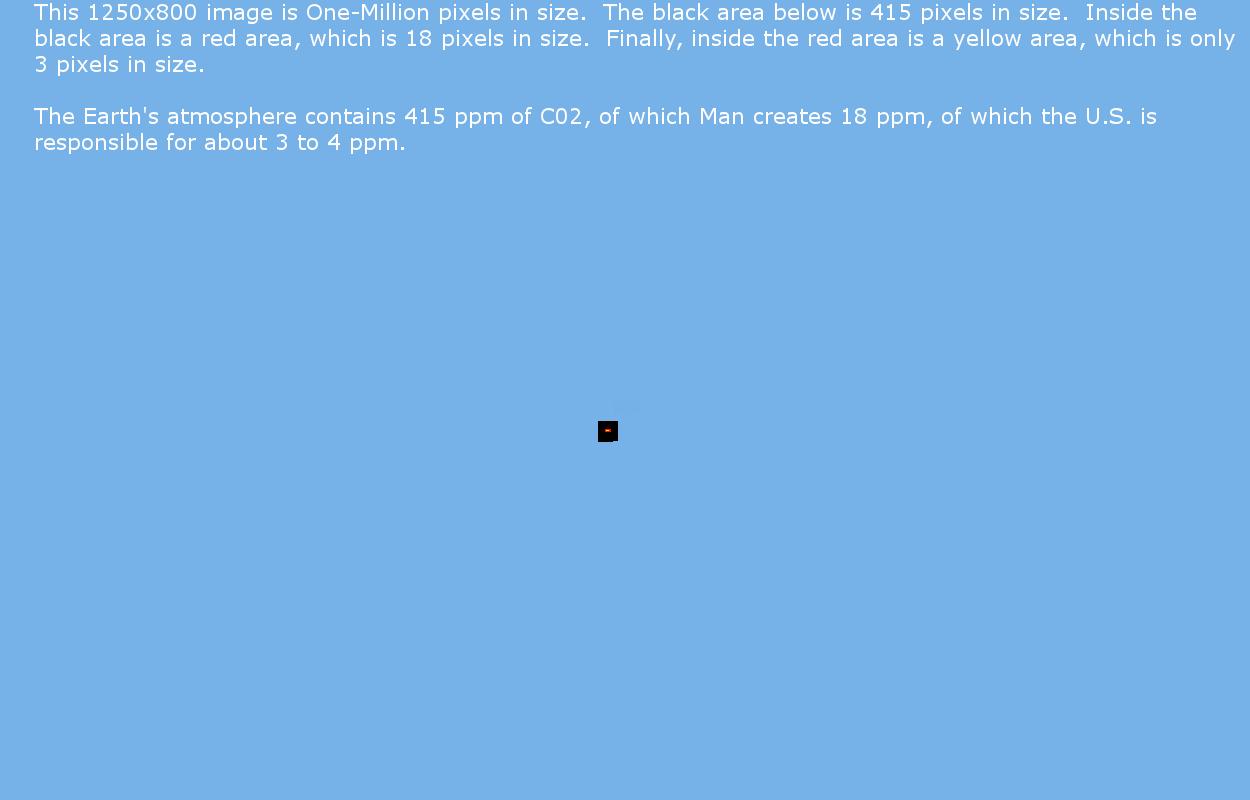 Those Norse settlers eventually starved to death and the Iceland trees are now few and far between.

Science A or B?  I will side with the one that have been published in peer reviewed technical journals.  Just follow the money to see what their motivations are.  The scientists that research those peer reviewed articles are being fired right and left by (undergrowth, not climate science) Trump and the ones that survive have to fight for relatively minuscule grant money.  The other science is funded by organisations that have raked in trillions over the years.  And their internal documents show that they were fully aware of the climate cliff we are now flying off of back in the 70s.  The “incubator babies” and “cooling planet” propaganda machine is thriving.

This global system’s maximizing of waste in order to maximize profits will end very soon since there isn’t much left to waste.  A local system that emphasizes cooperation instead of competition might work since that waste would be right in our faces.  Unfortunately that will not happen on a global scale since people and waste in far away countries become abstractions on a map.  But what happens when millions of local systems fight for what’s left?  Just look back at the recent toilet paper fights and magnify that by a billion.  All of the bullets in the world will be used up pretty quickly.

I’m sorry, Ision, but with this post, you have lost all credibility with me.

First, the Earth’s climate is NOT driven by CO2 at all.

Really?  Where do you get this from

Man’s ENTIRE contribution to atmospheric CO2 is only about 18 ppmv, of the total 411

Points 3, 4 and 6 are dependent on your highly erroneous point 2.

Point 5, yes CO2 does vary due to the vegetation cycle in the northern hemisphere, but 6 ppm i rather small compared to 131 ppm, so it’s inconsequential.

Point 7 is irrelevant.  The important question is “Where are we heading and how will that impact us?”

Point 8.  Nice way to oversimplify the highly complex atmospheric radiation balance to the point where it seems CO2 seems to be irrelevant.  Nonlinear interactions between the various factors (clouds, particulates CO2, water vapor, other gases), some of which vary tremendously both horizontally and vertically, are so complex that they can only be solved with sophisticated modelling.  Not too mention that the other gases have a strong influence on water vapor in the atmosphere since warming from these gases increases evaporation

Plus, CO2 RADIATES ITS ABSORBED ENERGY IN ALL DIRECTIONS, NOT JUST BACK AT ITS SOURCE.

That’s the way radiation works.  So half is radiated towards space and half towards the earth. So what?  “This mechanism which I have failed to quantify is only half as large as you might think it is, therefore it’s effect must be zero.”  I think we can see the logical fallacy there.    If the half towards earth is sufficient, warming will result.

And the big blue square is meaningless.  The two main gases in the atmosphere, O2 and N2 are nearly inactive when it comes to longwave radiation.  Nearly all of the action comes from radiatively active gases (comprised of 3 or more atoms – water vapor, CO2 and methane are the most important) that can have a significant impact even at very low concentrations.  Not to mention that the teeny tiny red square is a lie.

If you are warm at night, it is because of water vapor..not CO2..for example.

Sure, that’s what makes a hot muggy night, but on the scale of the earth’s overall radiation balance and temperature over years, small, but consistent changes are much more important.

The energy absorbed by CO2 is exactly the same frequency as is absorbed by WATER VAPOR…of which there is so much…it simply overwhelms the ability of the CO2 to even get a chance at doing so. 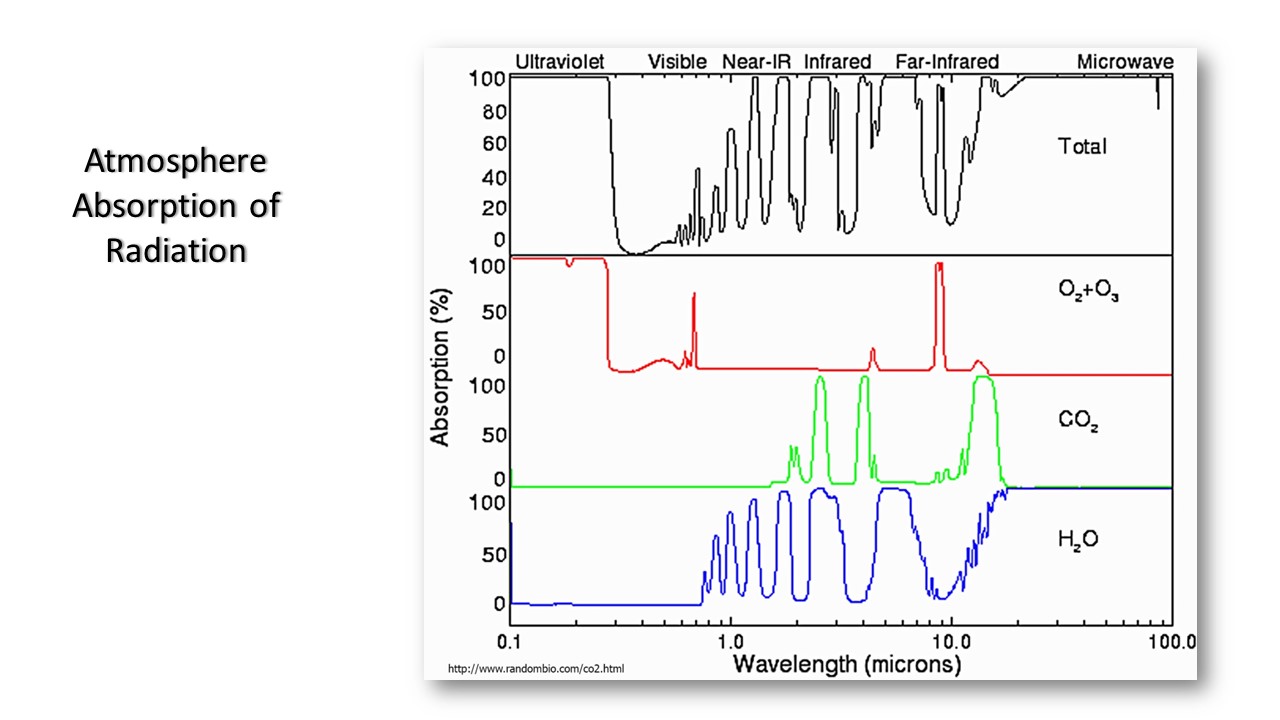 The earth’s radiation emissions peak around 10-15 microns and are significant starting around  3 microns.  The last two spikes for CO2 are in this range.  The first one has almost no overlap with H2O and the second only partial overlap.

I don’t know where you get your data from, but maybe they aren’t so reliable.

And finally, climate change is only one of a series of intersecting crises that create our current predicament – and most certainly not the most important one.  We really need to expand the conversation – and find a way to sort the nuggets from the BS in the propaganda coming from both extremes.