Is the virus itself really the problem? Or is agendas?

I thought about sending this by email but I decided it’s more appropriate as a community discussion, so even though it’s written directed at Chris, feel more than free to chime in… 😀

Hi Chris, don’t you see the contradiction in this?: 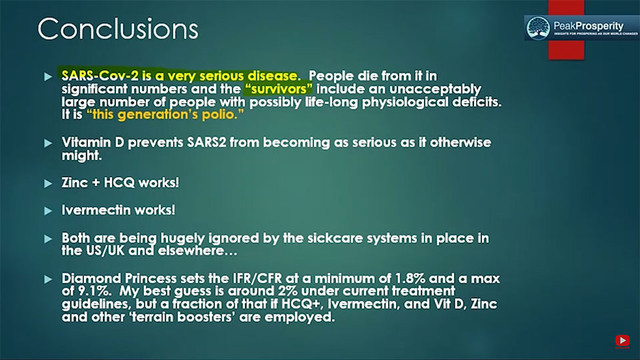 The problem isn’t SARS-CoV-2 anymore, it’s the lies about health such as not informing appropriately about vitamin D, zinc, HCQ, vitamin C… as you inform about in the very same slide! While initially the nature of the threat may have been unclear, the virus is now being used as a cover for other agendas which are protected by those lies.

If you’re afraid of it, you’re still buying into a certain level of fear, yet I think you haven’t explained why you think if we actually use what works that you’d be one of the symptomatic ones. In other words, what makes you think you’d notice any symptoms if you got it, much less experience long-lasting damage, when you are already taking the nutrients that will make your immune system competent? Maybe it’s easy for me to say when I’m a bit younger and I wouldn’t be saying it if I were 25 years older… maybe. But we already have data specific to SARS-CoV-2 and general to viruses for these essential nutrients and medicines. It’d be nice to have more clinical data on immune system nutrient deficiency status in Covid cases beyond vitamin D, but it’s obvious to us researchers (ahead of the corporate/”mainstream” “official” narrative/understandings/perceptions) that zinc plays a very major role, as deficiency symptoms overlap to a large extent: 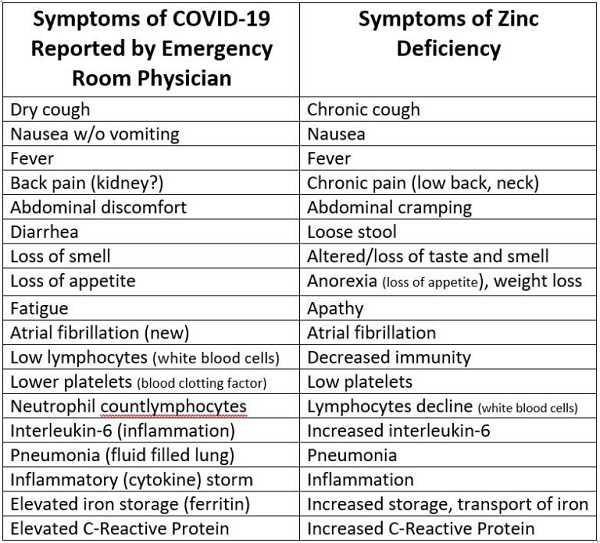 We know the key nutrients are zinc, vitamins D, C, A, E, B3, selenium, NAC/glutathione. You also need adequate magnesium and K2 levels for good health, as well as sources of absorbable/usable protein and saturated fats and cholesterol (severely lacking in most long-term vegans). Another big factor is the microbiome, which is more difficult to correct.

We know the key medicines once symptomatic are HCQ, ivermectin, and in fact (and this might be beyond many people’s current research willingness but there’s no real justification in hiding it), CDS, which is another dirt cheap effective (if you go by anecdotal evidence) or at the least potential (if you go by available/published significant studies) treatment substance that they fight extremely hard to suppress. Researchers in Ecuador just recently published a preliminary study reporting 97% recovery rate when used in early stages. I, like many people, suspect I and others I know have had it with minimal symptomology, which I and two of those I know chose to eliminate right away using CDS prophylactically (due to being extra cautious early on during the exponential phase), as I have many times before used to eliminate other infections (and as a biohacker of 10+ years I have tried dozens of other effective and ineffective substances for that same purpose). It’s kinda to medicine what DMT is to drugs, it’s something that may require personal experience to prove at this stage, sadly, but I suspect it’ll make its way into our consciousness, no matter how effectively defamed by the criminal cartel running the pharmaceutical-medical industry.

And then there are also various still experimental ones showing potential like meplazumab (a humanized anti-CD147 antibody) and blood plasma treatment (more for critically ill patients). Theoretically, a vaccine could be useful, but there is less than zero reason to believe it won’t come with adjuvants possibly worse than even the virus, as we are incredibly continuing to allow to happen with almost all existing vaccines.

Another major ignored factor is the major contribution of the mindset and the stress/cortisol accompanying more negative mindsets. If you’re afraid of catching it and then you catch it, you being afraid will shut down your immune system and aggravate your experience and your symptoms, while if you’re more hippie-dippie about it you might experience it as one more interesting transitory experience or challenge in life. I could go into the metaphysics of fear, but essentially it’s actually fear[ful creation by the mind] that drives any disease. We might discuss this at another time, but we certainly know the immune system is hardly active during sympathetic arousal which is prolonged by stress and can even become chronic (hence GABAergics, NMDA antagonists, and cannabinoids can also be useful).

You haven’t AFAIK been able to explain the Sweden anomaly, you just gloss it over as if it didn’t require an answer when it’s easily paradigm-shattering. While we can agree that in many ways we don’t have enough data yet, their approach seems far less harmful. They realized early on that their main source of infections was senior homes, i.e. older people unfortunately following terrible health guidelines such as no Sun exposure requirement and low vitamin D supplementation doses (and typically no other useful supplementation except fish oil), terrible prescriptions such as calcium supplementation (without D3+K2+Mg) or daily statins (without added CoQ10), extremely toxic and ineffective yearly flu shots (another Big Pharma corruption victory)… So, even without correcting all that terrible health care/advice (which makes the oldest population much weaker than they need be and the general population weaker than they need be), Sweden’s far more moderate restrictions and recommendations seem just as good or better than other countries, physical health-wise and moreso economic and mental health-wise. A much bigger factor than the lockdowns and even face masks seems to be immune system health status, largely affected by nutrient deficiencies and suboptimal levels (which are also deficiencies but not defined as so, as e.g. in the case of vitamin D where the US AMA recommended level is 20 ng/ml but 40 is the cutoff for sufficiency and 60-80 is the optimal level for health and disease prevention).

So I don’t see why you would continue giving credence to the lockdown methodology when it’s clear that only tyrants are persisting in keeping the economy shut down and people under house arrest in the name of fighting the virus (while ignoring far more effective and logical methods as outlined above)… You seem to think the priorities of NZ were different than the UK because Jacinda Ardern is concerned for Kiwis’ health, rather than her being a tyrannical globalist puppet like so many others. The lack of conspiracy research shows. What’s more concerning though is the low degree of concern for freedom and individual rights and responsibilities caused by this lack of awareness of the control system and its agendas. Many of our “leaders” displaying incompetence are far more forgivable than our “leaders” who are simply following the orders of the agenda. Is the best leader the one who “saves” the most lives, or the one who takes away the least amount of freedom?

Which one has longer-term effects? How many people will die or experience great hardship due to the measures taken by the globalist health mafia [“The Global Health Mafia Protection Racket” – must watch!] and puppet governments, using extremely harmful unproven methods while giving out false advice and threatening to force shady vaccine inoculations (in my country even threatening to kidnap and put asymptomatics in concentration camps)?

I could go into the nature of death and how we are conditioned to fear it instead of embracing it as what we always used to know it is (and many cultures still do): the end of a cycle, the reentrance into the more primordial aspects of self or spirit realm or parent phase space, or 6th/7th density, whatever you wanna call it. Not to side with the agenda that several criminal governments have to use the coronavirus to get rid of as many old people as possible to help balance their budgets and create high levels of fear to advance control agendas, but it’s likely true that most of them would’ve likely preferred to have died of some fast-acting respiratory disease than a number of other diseases that are likely to hit you if you haven’t taken control of your own health into your own hands by that late age. For many being socially isolated away from their family for long periods or even their last days/weeks is also a pretty big downgrade, not an upgrade or a helpful gesture. If we were smart, we would welcome death, not fight it by any means possible at any cost.

In one of your recent videos you said: “Whether by commission, omission or plain old ignorance, our media is failing us — it’s not probing as critically and deeply as it should to ensure the information it brings us is valid.” – Yeah, welcome to… the 1990’s? By now if you haven’t been observing the MSM to be deeply criminal you just haven’t been paying attention (to the right sources of information). If you’re a researcher, you’re a “conspiracy theorist”, and you should welcome the label given who uses it and where it comes from; while if you’re an MSM-created NPC official narrative believer, you’re buying into all sorts of absurdly false and kooky “conspiracy theories” like the “Russian collusion” hoax while being unaware of everything that’s really going on.

Thanks for reading, kudos for the great work you’ve been doing. 😀

(btw, cloudflare made me lose this post the first time, after having to manually insert links – very bad!)

Thank you for expressing my growing uneasiness with Chris’ position. It made sense a couple of months ago when we knew less but it isn’t anymore. The recent post he had about the “new polio” is an example of supporting an unnecessary fear based meme. As a psychotherpist I am very aware of the fact that our body experiences stress via our thinking.. the last thing we need is unnecessary fear-based thinking.

Just yesterday I was talking to a Swedish friend here in Australia and he said how his sister and friends all in their mid 50’s had caught the virus and now were fine. Their more relaxed attitude would be supporting immune response by reducing subjective stress creation.

Yes… protect the most vulnerable while building their health and immunity but much of the lockdown restrictions could now be eased if health officials really educated people how to improve their immune health.

Chris, your message is starting to not make sense… partly because of your excellent work done in educating us on what we can do to strengthen our immune systems.

Thanks for highlighting that TBP!!

PS. New Zealand had a much stricter lockdown then Australia … but we got a very similar result. We need to learn more quickly what the situation really calls for.

Yeah, NZ has totally devolved into a police state with no rights, as Styx explains – will they get them back? Unlikely given who is controlling NZ (although there are countries in far worse condition including Western ones). But Chris seems to think UK taking extreme tyrannical measures late is a sign of bad government in comparison to NZ!

Would you seriously rather not get the virus than live under tyranny?? I guess it takes oneself or at least one’s parents (or grandparents?) to have lived under criminal governments, huh?

We need to move, we are moving, OUT of Kali Yuga, not deeper into it.