Bloomberg chart showing 2021 percent of global GDP by country according to IMF data. 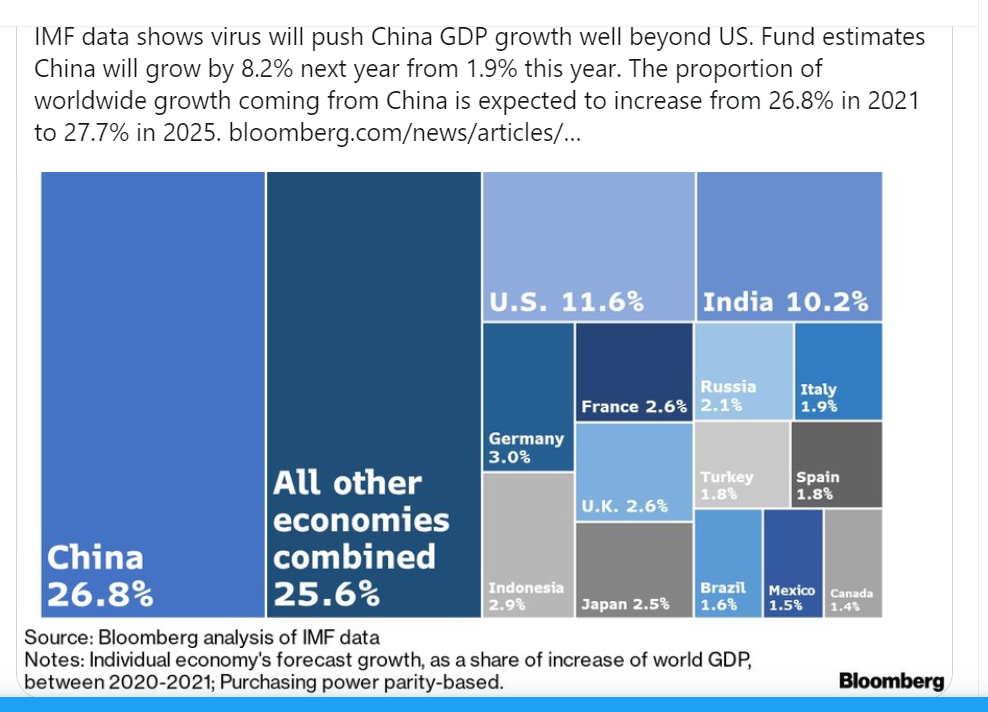 One wonders where all the oil will come from to fuel all that clearly good, and beneficial growth.  Or the sand.  Or a hundred other critical commodities.

Back when I did some work on that Chinese funded UN panel on sustainability, the Chinese nationals were all 100% up the resource scarcity awareness curve.  Right at the top.  No more learning necessary.

In the US you’re lucky to run into anyone who fully subscribes to the idea at all.

Meanwhile, back in China – there are dozens of such installations sprouting up all over the place.  Almost as if they know something…. 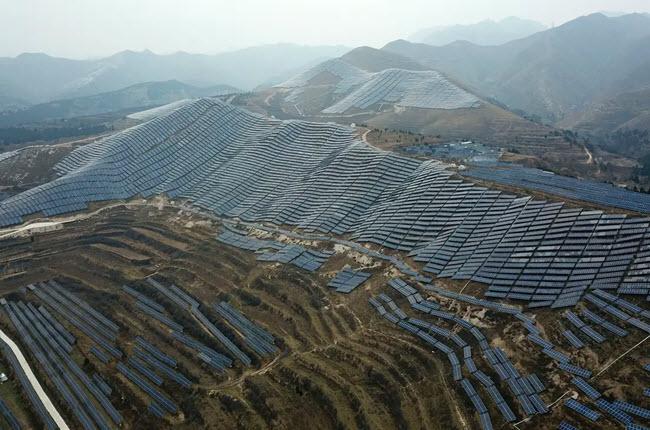 Well first of all, its a lot easier to get the oil for yourself if you:

a) export a pandemic to your competitors, and then

b) encourage them all to engage in perpetual lockdowns through your puppets at the WHO, which ends up crushing their own economies through massive self-inflicted wounds.

Oil then becomes dirt cheap; you buy as much as you possibly can store, and then, you buy as many oil production companies as you can on the cheap, after GDP values have dropped 15-20%.

You can also fund global “climate change” efforts, while producing the most carbon emissions in the world by a factor of two, while promising to be “carbon neutral” so far in the future so as to be essentially irrelevant.  All while installing new coal-electric plants every year.

So that’s one way.

Any bets the CCP has puppets within the IMF?  They really need USD to fund their oil acquisition projects.  How best to attract those dollars?  Well, you could put something out that got everyone excited about pouring their dollars into China…didn’t need to be truthful, just needed to sound good…Wall Street is just fine with that, as long as they get their cut.

I mean – sky is the limit here.

I have been watching the Chinese re-farming of the population. They do see something. I imagine a part of it is the decision to refocus growth plans on internal economic growth, greater isolation from the world, esp the West (and in particular the US), and secondarily a focus on Asia for trade. I don’t think they’ll worry too much about creating ecological damage in client states any more than we have.

I think Dave is right that they’ll continue to buy up resources wherever they can while they can. For that, a more land-centric, self-reliant domestic economy is good long range insurance, too.

The refarming – I’m guessing – has to do with the US finally deciding to cut the CCP off from the supply of high tech components, many of which are made in Taiwan.

Taiwan – that country which the CCP is constantly trying to bully – up to and including attacking Taiwan’s diplomats over a cake they didn’t like.  That’s not hyperbole.

A Taiwanese official has been hospitalized with a head injury after an altercation broke out between Chinese and Taiwanese diplomats in Fiji earlier this month.

Taiwan’s ministry of foreign affairs said two Chinese Embassy officials arrived at the Grand Pacific Hotel in Suva where the festivities took place and started “harassing” and taking photos of the guests, which included Fijian ministers, foreign diplomats, NGO representatives, and members of Fiji’s ethnic Chinese community, according to the Guardian.

In about six months, their supply of Taiwan-supplied high tech parts will be all used up.

I’m guessing that’s why they are going back to farming.

The only way this IMF prediction succeeds is if Biden gets elected, and he cancels all of the “get tough with the bully that ate Hong Kong” policies that Trump has put into place.

There is only one way to deal with bullies.  And it doesn’t involve caving.

Do you know how China measures their GDP?  The Chinese governmental annual meeting sets quotas for the provinces/cities. It’s pure fiction…H.B. is more believable. In this is anything that is infrastructure. In China, when a developer purchases land to build shops or apartments, that is a one time income source as there are no annual land/property taxes paid.  Recently they changed the law. When an apartment is sold, now you must pay an accrued tax rate. This change actually caused rioting. Running farmers off their land and incorporating it into the city to be sold, GDP. Building unoccupied businesses like the Ghost Cities in IM, all that is part of GDP.

As for exports and factories, I’m sure the Uyghurs,  political prisoners,  and Falun Gong thank you for purchasing those items.

Tearing up a decent bridge and rebuilding it, or repaving the same highway every single year is the circle of life. Work happens, bribes flow. Gotta keep the KTV whore houses open somehow.  When governmental money goes for projects, officials get their cut first, bosses skimp on materials, workers work and might not get paid, and the bridge is built or road done. The fact it’s a piece of crap is immaterial. The fact there are numerous side roads off the highway with potholes large enough to swallow a small car is immaterial. Those will never get done because they’re in the “peasant “neighborhoods. The fact there’s no grading for the road run off and when it rains, the water flows out of the sewers not in, is not important. The fact the newly repaved road has all access to it literally trenched up overnight so they can begin tearing it up again is status quo. That’s where they get GDP numbers.

Every provincial government has their illegal activities propping things up and supplying the mistresses with cars/houses. They pay bribes to the higher ups to construct things and ongoing mob like protection fees. Banks only loan to big companies, all the rest is via loan sharks who hang out in the hallways of banks. 40% + interest rates.  None of this is reported.

Bloomberg carrying water for the CCP… I’ll try to fain shock. Could it be because according to CBS 2017 report the CCP owns the Chicago Stock Exchange? Or they fact they acquired thousands of acres of US farmland with they bought Smithfield Foods  (pork production)?

Remember Bloomberg school of public health was one of the co-hosts of Event 201 with Gates Oct.’19. And lets not forget this ditty…

“NEW YORK, BEIJING, LONDON and JOHANNESBURG, Oct. 14, 2020 /PRNewswire/ — The China Center for International Economic Exchanges (CCIEE), The  International Institute for Strategic Studies (IISS), and Mandela Institute for Development Studies (MINDS) have been named as co-hosts for the 2020 Bloomberg New Economy Forum, to be held virtually November 16-19. More than 500 current and former heads of state, influential business executives, government officials, academics and experts from around the world will join them in a collaborative effort to help redesign key parts of the global economy after the ravages of Covid-19, emphasizing sustainable and inclusive growth.”

Gee, I wonder…do you think they’d say whatever they’re told?

Make sure to run out to (shop online) at Walmart and all those Chinese outlet stores.

Remember the jobs you save aren’t here.

The inflated GDP games and widespread corruption is not in doubt, but I think it’s important to ask 1) is their real economy still seeing a trend towards growth where most other nations’ economies are stalled or contracting, and 2) does their top-level leadership have better long-term planning on average than most other countries?

I’d argue the answer to both is probably ‘yes’. I don’t LIKE saying this, but it seems to be the case and I’d rather not underestimate them. Just being acutely aware of the resource limitations like Chris’ earlier post mentioned puts them ahead in the game. The PRC is like a card player with a mediocre hand but who is clever enough to make the most of what they’ve got, and sometimes that allows them to get ahead of players with better hands they’d normally be at a disadvantage with.

On the plus side, at least more people are aware of the threat the CCP represents now. That, and the CCP seem to be overreacting under pressure as of late and pissing off their neighbors (& their own citizens) more than usual. Nice to know while they’re clever, they’re far from perfect. I don’t want to see them having more regional power than they already have, especially living in a neighboring country as we do.

On a complete side note, is your username a reference to the Inner Mongolian city of the same name? Never been there (and might not ever given the PRC’s recent veiled threats to detain Americans), but my Mongolian in-laws have and I’ve been as close as Erlian/Erenhot (which I suppose is not THAT close but is in the same province).

It occurs to me that the constant series of overreactions by the CCP could well be driven by that same model they use to calculate their “Comprehensive National Power.”

Perhaps changes to this metric is how subordinates get evaluated.  It sure would explain a lot.

Seriously.  You are what you measure.  See how the realtime measurement of COVID-19 cases has affected the decisions of politicians in the west.

Retired U.S. Coast Guard Captain Bernard Moreland — whose last posting was as U.S. Coast Guard liaison to Beijing — explains: “One of the important things to understand about CNP is that it is an objective metric. Beijing constantly calculates and recalculates China’s CNP relative to other nations the same way many of us watch our 401(k) grow. For us in the West, concepts like ‘national power’ are subjective vague concepts. The [Chinese Communist Party is] obsessed with engineering and calculating everything and believe that all issues can be reduced to numbers and algorithms. This is what they mean when they euphemistically refer to ‘scientific approaches.’”

No doubt they are long term planners and calculating.  World domination is their goal, and according to Confucian hierarchy, their right. But we in the West are stopped by morals, they are Machiavellian…”the ends justify the means.” The question is: how ruthless do you want our politicians to be to get a result?

They also pick up tricks along the way. The current deadly fentanyl epidemic in the USA is directly modeled off the Opium Wars. It is reported that all the Mexican cartels are C. controlled and supplied. Retribution from when the Brits. tried to force them to take paper currency. The promise of UBI and free college in the US reminds me of Mao’s promise to the farmers that they could own their own land if they supported him. Never happened. In fact, if freezing to death, you can’t burn wood from a dead tree as the tree belongs to the govt. To get any job you either have to pay a high bribe or know someone. Teachers extort money from parents to pay attention to kids. Surgeons get red envelopes from families outside the OR to do a good job. Does this sound like prosperity ?

Remember in Mao’s “Great Leap Forward” the educated were killed or sent to farms and farmers were brought to run things. It collapsed the economy. They intentionally destroyed all remnants of history. (Sound familiar?) Taiwan has the largest museum of Chinese History as the documents and artifacts were spirited away. All we’re seeing now in the US is how the CCP got tighter control of society with Google assisted social credit scores and going cashless. Let’s not forget their forced abortion policies.

Meanwhile, here in the USA, idiots cannot line up to be imprisoned fast enough. Newsom passed some law banning gasoline powered vehicles in the near future. Other US politicians have mandated self- driving cars.  Not about safety, but control of people’s movements. Even now the tool On-Star can shut off your car remotely.

Want our economy to grow? Get the rich to invest in factories: Pharmaceuticals, steel, electronics. These are things that can always be used within and sold elsewhere.