Ha! I relate to your comment about early difficulty buying. If it were not for my brother (who is more computer literate than I by a considerable margin) I doubt I’d have ever started on the crypto journey. As it was, he held my hand through the process, gently laughing at my worries and incomprehension — my first purchase of BTC was with money I didn’t really have.

He also prevailed on me to move my coin out of Coinbase and onto a private wallet. I don’t use a hardware wallet, however. I’m satisfied with the protocol of Exodus, which also makes it easy to shift between coins if I want. Yet, it is protected against the potential for exchanges to pool wallet assets the way some gold depositories pool gold – the net result of which is you can’t be confident that when the music stops you’ll still have a chair with your name on it.

I don’t think Coinbase does that, I’ve just stopped being trusting. Plus, of course, if the coin is in an online wallet in an exchange over which a government has regulatory authority, that exchange is going to abide by any lawful command to freeze someone’s (or everyone’s) assets. Not so good.

That would be my one concern about your holding your coin on an exchange. You are open to that risk. How big a risk likely depends on macro political and economic factors over which you and I have no control, and that shift from month to month. But if, for example, the US government decides to launch a digital version of the dollar and considers other digital currency direct, and possibly illegal, competition, it could move to freeze or confiscate any coin over which it can exercise such power – without warning.

For that reason, I keep my BTC off exchanges. It’s my crown jewel and I protect it. It’s also 90% of my crypto holdings. I am willing to risk the other 10% to confiscation in return for earning a bit of interest, which I take denominated in BTC and promptly move off the Nexo exchange I use.

I do find the ETH/BTC Risk Strategy intriguing. I like that it’s a staged approach to entering and exiting a position – that suits my general investing temperament. Seems it would work, too.

For me it’s more active investing than I’m currently interested in. These days I’m pretty much a buy-and-hold kinda guy – so I can spend my time building my resiliency ark. I’m not trying to actively grow my wealth through crypto so much as protect it’s value against the long term. As an old investor in early stage companies, I also appreciate asymmetrical upsides and BTC fits my old stock-picking criteria darned well, with more upside potential than I ever saw in any stock. I engage in rent-seeking on my non-BTC crypto just because it is such an easy thing to do these days, and I’m only putting out 10% for rent.

You need a duplicate Hardware wallet, if you have only one in the bank vault because, like gold, what do you do if the bank is closed for a “Holiday” ie. “Reset”? Beware DeFi! Celsius the possible exception and one or two others.

Pssst! hey! kid! You want to see pictures of my sister?

At the heart of liberalism is a belief that the system can work, if it could just be architected well enough and administered competently and compassionately.  My personal journey to Bitcoin maximalism involved a painful dissociation from this fundamental worldview, specifically in the course of digging in to understand central banking monetary policy and the irresistible levers that come with it.

As an aside, I went to the best business school in the world and they didn’t teach us anything about that.  For what it’s worth, I don’t think that this was a knowing or malicious omission.  I think this battle was won 100-years ago, in Keynes’ day, with the self-serving support of governments weighing heavily on the outcome.  Which is to say, my professors learned from Keynesians who themselves learned from Keynesians.  The business leaders and educators of today are completely unaware that they are passing on the shoddy propaganda version of monetary theory as a result of the largely successful ideological extermination of sound monetary theory.

I use Coinbase Vault for my HODLer holdings. It is actually more secure than Ledger.

DEFI is the future of finance. Traditional financial instruments are being adapted to the crypto space. There are still some security issues to be worked out since the smart contracts are on chain but information comes from off chain which does not have the security mechanisms of the blockchain.

As foe energy usage most miners are using “green energy” that would otherwise go to waste. Energy usage is an issue with solutions. Peter Thiel with his mining farm in Texas actually sells energy back into the grid for a profit.

One thing to note if you are trading is that bots are very prevalent now and getting more so. Crypto being an obviously digital asset that trades 24/7/365 lends itself to HFT. As more big institutional traders get involved it will be mostly bots running the market. The sort of good news for retail traders is you can buy your own bots.

The $354 billion question is why is this subject being ignored on this site?

Why did I not get a response to my offer to arrange a podcast with Brian Armstrong?

Why hasn’t there been a podcast with Andreas Antonopolous?

We are now 11 years into this space.

I own some, and it is my goal and practice to position myself to acquire more for exactly that reason:  the hedge against fiat because, as we all know, all fiat currencies eventually go to zero.  Bitcoin is rather a behemoth, the granddaddy of them all, but its not going away and will only increase its value to me as “digital gold”.  I move in and out of some other alt coins for the express purpose of converting to stable coins (DAI, USDT) and then wait for that sweet dip in BTC to purchase more.  It’s a slow process but patience wins the day.  I actually know a “whale” whose holdings are (in this order):  gold, silver, BTC, and platinum.  I still have mine on a cold storage wallet, I am strongly considering Nexo or Celsius to earn interest.  I want my $$ working for me, not just sitting in cold storage (however, I don’t keep them on any regular exchanges per se).  I have only staked one project so far; that should be interesting to see where it goes.  And yes, dollar cost averaging is the way to go.  The  market is still too volatile for anything else until mass adoption is achieved.

Here are some interesting charts from Raoul Pal of Global Macro that show the ratio between the G4 central bank’s balance sheets versus stocks, gold, and bitcoin. The lower the ratio the better the asset is performing as a hedge against ‘central bank printing’.

Not so good. Despite reaching all time highs recently, they are losing ground versus the expansion of the four major central bank balance sheets. 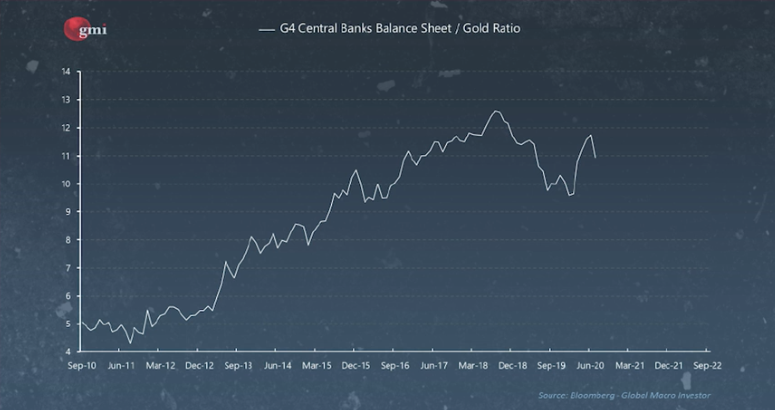 Again, not so good. Despite the recent bull market your purchasing power isn’t keeping up with the printing. Not yet, at least. 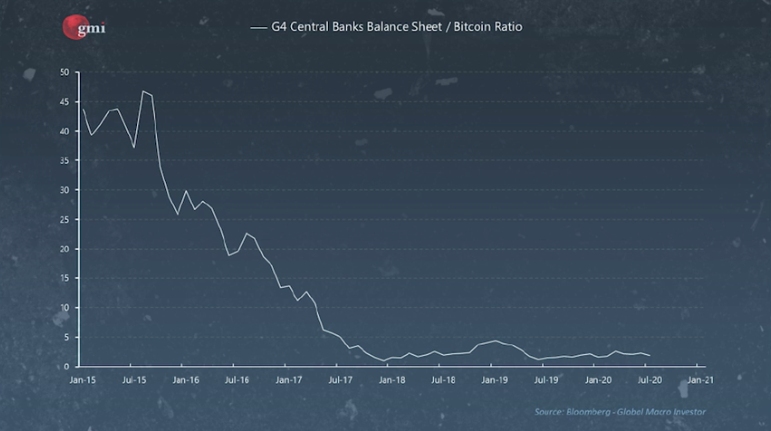 Full Disclosure: I sold 2/3 of my bitcoin last week because I don’t like the current psychology of the trade. I hope I get an opportunity to get back in from a better psychological foundation.

I was thinking last night and this scenario popped into my head.  Those more knowledgeable than me on the subject (an admittedly huge pool of individuals) can chime in with what you think.

Now let’s say that state entity decided to apply their newfound electrical power and computational power to mining Bitcoin.  Are there protections in place to keep them from ultimately dominating that market?

AO, I am no computer geek and cannot delve into the thickets of computational structure and methods, but your question is one I had, too. So I explored it and I understand the principles if not the details. I’m sure others here can go into the minutia if you want it, but I can give you the broadly-outlined answer I gleaned for myself.

Yes, there is protection and it’s two-fold, really. The Bitcoin protocol has a built in feature that adjusts the difficulty of the computation that has to be solved to “mine” a new coin based on how much computational power is being directed at the problem. Because of that regular adjustment, roughly every 2 weeks, the rate of new Bitcoin minting remains quite consistent as miners enter and exit the project, adding and subtracting computational power. It has proven to be a highly consistent, hence predictable, minting rate in practice.

Every 210,000 blocks (about every 4 years), the number of earned Bitcoin per problem resolution (which is block completion) is cut in half. However, ever-broadening adoption of Bitcoin raises per-coin price. But expenses increase, too. The slowly reducing net profitability has inclined at least some independent miners to pool efforts, and a pool’s success results in proportional sharing of the reward. This provides greater stability of income for all the miners over time and as the number of miners increases. It helps stabilize the network.

Second, the concern about some entity accessing extra-ordinary computational power and energy to throw at Bitcoin is not of concern only to the crypto sphere. The tendency of some critics to observe this potential weakness in Bitcoin and other crypto currencies is one-sided. Everywhere that computer security matters is a target, and most such targets are less secure than Bitcoin. Every online bank account, investment portfolio, mortgage paperwork, and dossier of private information lodged with government taxing agencies, etc., faces the same risk.

That said, just as with everywhere else where online security matters, in the Bitcoin world there are people constantly working on potential and perceived risks, both theoretically and actually. There is an “arms race” between security personnel and hackers everywhere. To date, Bitcoin has repelled attacks – which is not true for a lot of corporations, financial institutions, governments, and even some alternate crypto coins. Bitcoin has a strong protocol to begin with, which is great to know. But it has the added advantage of drawing fanatic volunteers who pursue solutions to perceived problems with avocational passion. For them it’s not just a day job.

If those fanatics were to dry up, the underlying protocol is still robust protection. Their presence adds layers of protection over the protocol.

Of course it is conceivable that somehow, someday the Bitcoin protocol will be breached and the project severely damaged; maybe even destroyed. Anything we can imagine is a possibility. But possibilities are not always actualities waiting to happen. From my perspective, we can hypothesize the global destruction of electricity; and it could happen, it just isn’t very likely. If it did, Bitcoin would be gone – but so too would the value of your stock portfolio, your bank account, and your proof of home ownership; nor would you be able to call anyone to complain, and driving to a local bank would be a literal non-starter – especially if you’ve migrated to an electric vehicle by then.

Short of global power grid failure, wherever power continued Bitcoin would continue, and my investment would be secure – even if I could not get to it. Is that true of my savings account? Not certifiably. (But this is why we also hold precious metals, keep some local currency on hand, and work on land-based resilience as we can, right?)