…and don't forget, a government troll as well.

Consider that there are about 150 million registered voters, and with this number in mind, according to Public Policy Polling:

So you're in great company.

I want to make a clear distinction as to my complaint with this thread, and that is that a statement and associated claims were made not just concerning evidence or proof in the context of the observed with the report findings, but importantly, claims were made that the entire explanation is in violation of the laws of physics, and COULD NOT have occurred as represented by the official explanation as embodied in the NIST report.

You are not using logic, you are misusing your alleged expertise and you are endlessly diverting the conversation.  You've not directly addressed the majority of my central statements and I remain utterly, 100%, in the camp of those who understand that free fall acceleration means there was zero structural resistance in WTC 7 for a minimum of 81 feet.

You have not presented one single example or plausibly scientific explanation for how an entire edifice spanning 330 feet in one direction and 140 feet in the other, could collapse all at once, at free fall, without any obvious buckling or distortions.

Worse, and unforgivably, you once again deviate and toss off a completely useless, diversionary and irrelevant study by one academic team on WTC 1 and WTC  2 as the 'explanation' for WTC 7, which I will rather pointedly repeat, is the topic under discussion here.

So yes, when we discuss such claims pertaining to ironclad and irrefutable laws of physics, we do require proof and not evidence. And the proof comes in the form of mathematics and calculations. And those mathematics and calculations have been provided here in support of the conceptual NIST findings that no laws of physics were violated, and that the building (1&2) did come down due to a cascading collapse mechanism.

The challenge has been to ‘show your work’ and the work has been shown.

Further, the report I posted demonstrated that once 1 full floor had collapsed, the entire structure was doomed, as the ensuing progressive collapse was at that point was UNSTOPPABLE and could only result in the complete demolition of the building due to gravity effects alone.

Again, the paper you are citing is about WTC 1 and WTC 2, not WTC 7.  That's about as major a sin as one can make in the world of science…using data and models from a different system than the one you  are writing about….or pontificating on, as the case may be.

Really, just very bad form on your part.  There's just nothing at all the same about the twin towers and WTC 7.  Utterly different beasts.  You cannot, may not, make any claims that "mathematics and calculations" have been provided that "show the work" because that's absolutely not true.  It is false.  It is, bluntly, a lie on your part.

Why would you cite a single academic paper from Case Western on a possible collapse mechanism for WTC 1 & 2 as the 'show your work proof' required to understand WTC 7?  Are you not aware that each structure is unique and that WTC 1/2 & 7 are about as far apart as they could be?

What is your motivation, then, to once again raise this utterly meaningless and inappropriate 'study' here in this conversation about WTC 7?  It seems dishonest, frankly.

And this next quote from you tells me, again, that you lack the open and inquisitive mind necessary to conduct reasonable science, that you are instead blinded by your emotions on the subject.

And what, no one is going to figure this out? No society of professional engineers, no universities, no one, not a single person able to “see what cannot be seen in plain sight”, is that it?

As has been repeatedly cited and linked to here and elsewhere is that a consortium of several thousand engineers and architects have all put their reputations and possibly careers on the line to "see what is in plain sight" and make as much of a stink about it as our rather hopelessly blinded society can allow.

So, yes, lots and lots of people have figured this out.  People with big degrees, lots of experience, and plenty of common sense.

In closing, WTC 7 violates the principle of conservation of momentum until and unless you or anyone can prove how a minimum of 81 feet of structural steel across a 330×140 structure suddenly lost 100% of its structural integrity, this means that the laws of physics have to be suspended, or violated if you prefer, for the NIST story to stand.

I completely understand if you are not able to or ready to open your mind to this material, it really is a big step, but I will stop you from using bad science and authoritative citations that happen to be completely irrelevant.

Darbi's positioning himself with the majority of engineering and building professionals, ala this statement, is a huge logical stretch;

I do not agree with them, instead siding with the vast majority of industry professionals that do accept the NIST report

While the majority of professional engineers and architects probably would tend toward agreement with the Gov't story… that is only because they, like so many of us before we studied things, take the Gov't story at face value.  9/11 was very hard for me to grasp for a long time – so I understand this.  Agreeing with the Gov't story, having not really investigated with an open mind is a very different thing vs. agreeing after doing your own due diligence.  Darbi wants us to believe that there exist a majority of professionals who have done due diligence and still agree with NIST.. I don't think he has a leg to stand on in contending this.  If you stand back and consider that a group of 2000 + engineers and architects have actually signed on to an effort to rebut the Gov't story of what happened on 9/11… well that has to be simply unprecedented.

To me it is stunning that such a large group of professionals feel enough passion, having actually spent  time looking at the evidence, that they have signed on to the effort to request a new investigation.

I enjoyed learning about the way that a simple structure, like a silo, can suddenly buckle and abruptly collapse.  I appreciate Darbi's links on that topic.  When a simple metal cylinder, a structure essentially comprised of a single element, buckles, free-fall could be produced.  So the point is well taken that free-fall doesn't always mean explosive demolition–with the caveat– in a SIMPLE structure–like a silo or an isolated free standing vertical column. 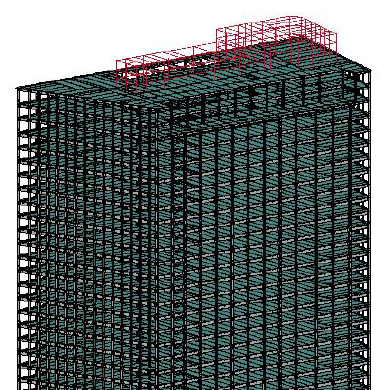 Diagram of the building structure.  WTC7 was very different than a silo.  If we imagine one vertical column buckles somewhere in the center of this matrix, it is pretty obvious that the structure as a whole will not collapse at free-fall speed.   The buckling column would first have to initiate a progressive process of tearing the building apart.  And that takes time.

Here is one of the earlier global collapse animation stills from NIST.  At this point the initial group of columns have buckled. Note the time stamp at the top of 0.7 seconds.

By 6 seconds the wave has worked itself horizontally about half way across the building.

And here, later in the same sequence, all of the vertical columns are buckled.  The time stamp here is 13.5 seconds.

So NIST gives this wave of tearing the building apart about 13 seconds to work its way horizontally across the building.  This is what is JUST NOT SEEN on the videos.

So the buckling of a single element structure like a silo doesn't apply well to a complex building like WTC7.  And it certainly does not explain a global, symmetric, vertical, instantaneous onset, free-fall drop seen for the building as a whole on videos.  And no horizontal progressive wave of destruction is visible on any video.

The Anatomy of a Great Deception

Here is the trailer:  https://www.youtube.com/watch?feature=player_embedded&v=zaZfgYUCiVw 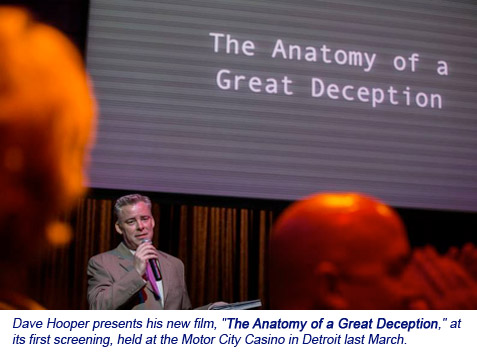 Great Post Sand Puppy.  Whenever this topic is brought up, it still shocks me that most people are unaware of Building 7.  It's also a generation thing too.  Older Generations hold onto Patriotic Slogans and everything that comes with that kind of brainwashing about how "This country wouldn't do that to itself."

I remind them that you can like your country, you don't have to like or trust your government.

Also I tell people to be aware of their thought process.  I tell the average "Government Truther" that how come you do not trust the government/politicians on issues like Healthcare, Spending, Taxation, Oh and just about everything they promise on the Campaign trail, but is a split second you will Bow down and Protect them on an issue like 9/11?

The Architects and Engineers for 9/11 Truth has sponsored a very clever ballot initiative that strongly encourages public scrutiny of the collapse of WTC7.  It is called the High Rise Safety Initiative.  It requires the city building department to study high rise building failures and print a report on the reason for the collapse.

They have delivered 67,000 signatures to city hall.

Requires the NYC Department of Buildings to investigate the causes of high-rise building collapses that occurred on, or any time after, September 11, 2001, excluding the collapse of WTC 1 and 2.

Requires the Department of Buildings to prepare and make public a report detailing the results of each investigation.

Establishes a .9% surcharge on construction permits to fund the study.

The reason that this is so significant is that most people who actually know much about the subject do not believe the story that WTC7 collapsed due to fire.  In their article, WTC Destruction: An Analysis of Peer Reviewed Technical Literature:  2001 — 2012.  Timothy E. Eastman, Ph.D. (Geophysics), and Jonathan H. Cole, P.E. (bottom of page 6) notes,

If it is true that steel-frame buildings can collapse from fire alone, it is crucial for owners of existing structures and insurers to understand the risk of a sudden fire-induced collapse so that structural repairs and risk adjustments can be factored in. Given the official story, it is remarkable how little insurance premiums, or even design parameters and building construction codes, have been modified (if at all) to address the possibility of catastrophic fire-induced progressive collapse. The fact that they have not been modified indicates that insurance companies do not accept the PC [progressive collapse due to fires] hypothesis.

Overwhelmingly, when people see the video of the WTC7 collapse for the first time, they notice that it looks like it is being demolished by explosives.

The hope here is that enough people can be pulled out of the latest "Dancing with the Stars" episode to watch the collapse video and see what is in front of their eyes.

new angle of attack. Should we not be checking buildings worldwide?

new angle of attack. Should we not be checking buildings worldwide?

We should. A disaster in the airline industry and all similar model aircraft would be grounded until the cause of the crash was investigated, determined and prevention measures put in place.  So what has changed in the IBC as a result of the collapse of WTC7 & WTC1&2? The final WTC7 NIST report does give recommendations (Chapter 5) but my guess is those recommendations haven't really been translated into building codes worldwide. 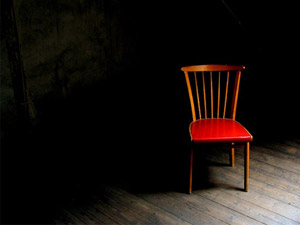 A $1,000 challenge is hereby offered [by the Architects and Engineers for 9/11 Truth] for a team comprised of a LICENSED high-rise architect and a LICENSED structural engineer and/or an active FULL professor of either of these disciplines to publicly defend the integrity of the NIST NCSTAR 1A final report on WTC 7, in a debate exchange format, with members of the Architects & Engineers for 9/11 Truth team.

Why is AE911Truth issuing a Debate Challenge?