Some time ago I was chatting with various friends and acquaintances and the topic of 9/11 came up. I wish it hadn’t but it did. One man said that he doubted the official story and gave an example of why. (Forget what it was.) I responded with my usual recount of the Co-Commissioners afterwards co-authoring the book in which they said that the Commission had been set up to fail. (I’ve not found anywhere their saying that they overcame the set-up.)

Another man got the utter willies over what I said, and loudly and flatly proclaimed,

I replied, “This isn’t a conspiracy theory, it’s what the commissioners said.’

“How can this be a conspiracy? They went through it all. They’d know better than we would.”

“So, do you know better than the commissioners? Were you on the Commission? This is their considered opinion, arising out of their experience. This is what they said, not me.”

“Wrong? How can it be wrong? Are they lying?”

Aaargghhh! Give up. In his defence he’s somewhere along the Aspberger’s spectrum, but still, if his method of thinking is anything like the general public’s, then no wonder we’re getting nowhere.

The programming can be very, very difficult to overcome and, in all too many cases, impossible to overcome UNLESS there is a personal experience of a profoundly negative nature that causes them to have to reshape their paradigm … and even then, the programming may still override facts, logic, and rational thought and behavior.

Yuri Bezmenov understands psychology.  Note what he says from 5:16 to 5:57.

Their defense mechanism becomes a wall of anger which shuts down their capacity to think and their mind shifts into closed loop perseveration.  In essence, they become temporarily functionally “brain damaged”, so to speak, and the evoked  strong emotion makes it impossible the reason with them.  The Molecules of Emotion by Candace Pert explains this phenomena.  They have to “burn through” (i.e. metabolize) the chemicals which have evoked these strong emotions before one can attempt to reason with them with any chance of success.  Best to just change the subject or walk away at that point.

Most of us ask “Who ARE these people?” As we learn about psychopathic, immoral destructive “elites.”

It is my conclusion that Bollyn is mostly correct.

Whitney Webb at MintPress does a stunning job opening up the world of the RED/BLUE ethnosupremacist faction in establishing a global Orwellian prison.

Had a quick look through the report

Here I will address an anomaly I noticed.

In earlier posts in this thread in discussion with Grover I wrote about observations on a video showing the upper section of WTC7 from a tripod mounted camera with good resolution.

I noted that at the same time as the penthouse begins to fall, distortions are visible on the face of the building in a line directly below the penthouse and smoke being sucked down into the cavity created by the falling penthouse.

These give a clear picture that the structure below the penthouse down to at least the lowest visible floor started to fall at the same time.

In the recent report they made a virtual model of the building with a number of assumptions made to reduce the processing power  required.

They then ran simulations removing columns 79 80 & 81 for 6 to 7 floors at various levels. Their models results were that if the columns were removed from lower down the penthouse would not fall. It was not until they removed the columns from floor45 up that they got the penthouse to fall.

So given the video evidence indicates that at least floor 37 up started to fall at the same time as the penthouse ( and not a floor by floor progression ) there is an anomaly.

On the 18th anniversary of 9/11, CNBC senior analyst and former anchor Ron Insana went on Bernie and Sid In the Morning on New York’s 77 WABC Radio to share his haunting experience of that horrible day. Approximately eight minutes into the interview, Insana made a statement regarding the 47-story World Trade Center Building 7 that is truly stunning, especially considering his access to the scene and his job as a prominent news anchor: “Well, remember 7 World Trade had not yet come down. And so when I went down to the [New York Stock] Exchange that Wednesday morning [September 12], I was standing with some military and police officers, and we were looking over in that direction. And if it had come down in the way in which it was tilting, it would have wiped out everything from where it stood to Trinity Church to the Exchange to, effectively, you know, the mouth of the Hudson. And so there were still fears that if that building had fallen sideways, you were going to wipe out a good part of Lower Manhattan. So they did manage for one to take that down in a controlled implosion later on. And the Exchange was up and running the following Monday.”” – G. Laratonda

One thing that people who defend the official narrative say, is that it would take weeks and hundreds of workers to rig a building for a controlled demolition and that it would be next to impossible to do this without anybody noticing while also requiring everyone involved to a lifetime of secrecy.

I don’t know how accurate this is, but it seems like a relatively strong argument against the controlled demolition thesis which I don’t have an explanation or rebuttal for.

I’m curious what the people here think about this. Apologies if this has been discussed in this thread before, if so I haven’t seen it.

The near perfect implosion demolition seen in WTC7 (see here, bottom of page 3) the largest and most perfect implosion in history, surpassing the 27 story Hudson Department store in Detroit  would require a very experienced team many months to set up.  So ownership of the building complex and control of access are critical considerations in this scenario.

An elevator modernization project was carried out in the summer months of 2001.  This operation is suspected of being the cover for demolition teams access.

Stratosec and Kroll and Associates contracted for security at the WTC building complex.  Both of these companies are closely linked to insiders and the network of suspected perpetrators.

It is widely asserted that “people cannot keep secrets.”  This argument is used to advocate that secret actions do not occur.   Critically examination of this argument shows it does not stand up:  Unrevealed secrets remain secret, and, by definition, we do not know about them.

Secret agreements, secret alliances (and their secret betrayals), spies and covert operations are the bread and butter of political maneuvering—all involve secrets and conspiracies.  History, novels, plays and movies are full of these.  Secrets and secret conspiracies are ubiquitous to the machinations of power and conquest.

And while you are at it what is the proposed reasoning behind doing such a clean drop.

If you wanted to keep it secret why drop the building in a way that would attract attention……unless you wanted certain people to notice for a specific reason!!!

So you guys are then just jumping through the hoops they set up….. oops…… 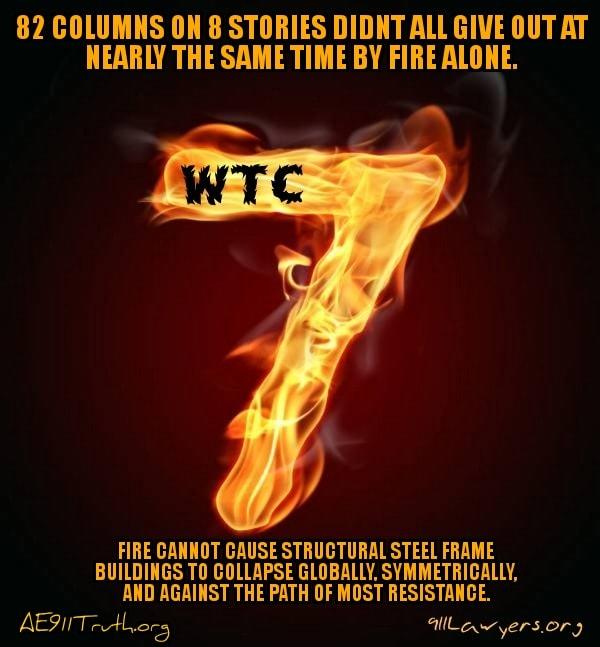