On or about 24 July 2019, the Commissioners of the Franklin Square and Munson Fire Department, which oversees a volunteer fire department serving a hamlet of 30,000 residents just outside of Queens, New York, became the first legislative body in the country to officially support a new investigation into the events of 9/11.

The resolution, drafted and introduced by Commissioner Christopher Gioia, was unanimously approved by the five commissioners and posted on their website. It read as follows:

Whereas, on September 11, 2001, while operating at the World Trade Center in New York City, firefighter Thomas J. Hetzel, badge #290 of Hook and Ladder Company #1, Franklin Square and Munson Fire Department of New York, was killed in performance of his duties, along with 2,976 other emergency responders and civilians;

Whereas, members of the Franklin Square and Munson Fire Department were called upon to assist in the subsequent rescue and recovery operations and cleanup of the World Trade Center site, afflicting many of them with life-threatening illnesses as a result of breathing the deadly toxins present at the site;

Whereas, the overwhelming evidence presented in said petition demonstrates beyond any doubt that pre-planted explosives and/or incendiaries — not just airplanes and the ensuing fires — caused the destruction of the three World Trade Center buildings, killing the vast majority of the victims who perished that day;

Whereas, the victims of 9/11, their families, the people of New York City, and our nation deserve that every crime related to the attacks of September 11, 2001, be investigated to the fullest and that every person who was responsible face justice;

NOW THEREFORE, BE IT RESOLVED that the Board of Fire Commissioners of the Franklin Square and Munson Fire District fully supports a comprehensive federal grand jury investigation and prosecution of every crime related to the attacks of September 11, 2001, as well as any and all efforts by other government entities to investigate and uncover the full truth surrounding the events of that horrible day.

The story was picked up by Architects and Engineers for 9/11 truth,  https://www.ae911truth.org/news/540-new-york-area-fire-commissioners-make-history-call-for-new-9-11-investigation , which was just as well, because on or before 31 July 2019, the commissioner’s resolution was mysteriously removed from their website without comment. This is the link which now leads nowhere. http://www.fsmfd.org/LatestNewsStory.php?nSI=1350828205

Who has that kind of clout?

The simulation comparisons (University of Alaska, Fairbanks versus NIST) are striking.

“On September 11, 2001, at 5:20 PM, the 47-story World Trade Center Building 7 collapsed into its footprint, falling more than 100 feet at the rate of gravity for 2.5 seconds of its seven-second destruction.

Despite calls for the evidence to be preserved, New York City officials had the building’s debris removed and destroyed in the ensuing weeks and months, preventing a proper forensic investigation from ever taking place. Seven years later, federal investigators concluded that WTC 7 was the first steel-framed high-rise ever to have collapsed solely as a result of normal office fires.

Today, we at Architects & Engineers for 9/11 Truth are pleased to partner with the University of Alaska Fairbanks (UAF) in releasing the draft report of a four-year computer modeling study of WTC 7’s collapse conducted by researchers in the university’s Department of Civil and Environmental Engineering. The UAF WTC 7 report concludes that the collapse of WTC 7 on 9/11 was caused not by fire but rather by the near-simultaneous failure of every column in the building.”

Simulated failure of all core columns (core only):

Simulated failure of all core and exterior columns on floors 6 to 13 (matches video record of the event):

I read the entire report.  I did not understand much of it.  It’s packed with really technical, intensely detailed engineering analyses.  They rebuilt the entire building, including all remodelings, into a CAD program and then “The quality control-checked digital AutoCAD geometry was then imported into the latest versions of both SAP2000 and ABAQUS, which are finite element programs. The two finite element programs were used to simulate and study the building’s structural response to various load conditions. Each program was used by a different researcher and the results were compared.”

In other words, a solid, careful study.

They put all of their assumptions out there.  They contrasted with the NIST study and showed place after place where NIST had not just failed badly, but inexplicably badly.

For example, NIST had not modeled in floor shear studs here and there when it suited their aims. That would be like modeling an airplane but forgetting to include the frame studs that connect the tail to the plane.

Under our second approach, we used a solid element model to evaluate the validity of NIST’s collapse initiation hypothesis, introducing a number of assumptions made by NIST that we considered to be invalid or, at best, questionable (Section 3.1).

These assumptions included assuming the east exterior wall to be rigid and thermally fixed, assuming shear studs on several beams were broken due to differential thermal movement, assuming no shear studs were installed on girder A2001.

NIST failed to connect the exterior columns to the interior.

In other words, NIST failed so badly at modeling WTC 7 that NISTs “findings” cannot be considered anything but pure garbage.

Who “investigates” the most important crime of the century, the one used to launch trillions of dollars of wars of choice and a complete erosion of domestic civil liberties, in such a sloppy, haphazard manner?

4.7 Summary and Conclusion
In summary, several findings were made from the analyses above:

1. Columns 79, 80, and 81 did not fail at the lower floors of the building. Instead, they needed to have failed at the upper floors of the building all the way to the penthouse. Yet there were no documented fires above Floor 30. Therefore, fire did not cause the collapse of Columns 79, 80, and 81 nor the collapse of the east penthouse.

2. The hypothetical failure of Columns 79, 80, and 81 — the three easternmost core columns — would not trigger a horizontal progression of core column failures. Therefore, the hypotheses of NIST, Arup/Nordenson, and Weidlinger that the buckling of Column 79 would trigger a progressive collapse of the entire building are invalid, and the collapse of Columns 79, 80, and 81 high in the building was a separate and distinct event.

3. Even if we assume the failure of Columns 79, 80, and 81 could lead to the failure of the next row of core columns, the hypothetical failure of Columns 76 to 81 would overload the exterior columns around the southeast corner of the building, rather than overloading the next row of core columns to the west, which would result in the building tipping to the southeast and not in a straight-down collapse.

4. The hypothetical simultaneous failure of all core columns would cause the building to tip to the southwest and would not cause a straight-down collapse.

Despite simulating a number of hypothetical scenarios, we were unable to identify any progressive sequence of failures that could have taken place on September 11, 2001, and caused a total collapse of the building, let alone the observed straight-down collapse with approximately 2.5 seconds of free fall and minimal differential movement of the exterior.

Did you get all that?

There was no circumstance under which they could get the building to fall straight down, at free fall speeds that not not involve the near simultaneous removal of the core AND the exterior columns.

Every progressive collapse scenario they ran made the building tip over.  Which makes sense, as it was an asymmetrical, well-built building.

The NIST report is complete bollocks, but we already knew that.  Now it’s been proven via a solid study, which I am glad we have.

The near-complete silence on this ‘out there’ is very telling.

I’ve been waiting four years for this….  Thanks for highlighting.

Do you have a link to the report?

I haven’t seen the report yet.  But it’s obvious that NIST diddled their FEM as much as possible to get results that were, at best, light years away from what actually happened.  It’s the usual “junk in junk out.”  The fact that UAF used a solid element model in their analysis shows how detailed their study was.  The pictures I have seen of the NIST model looked like they used extremely large and crude shell elements.

An accurate model of the failure of, for example, a beam/column weld has to be based on a real world test.  Once that model accurately predicts what really happened that modeling technique can then be used in a global model.  NIST had the real world test displayed in all of those videos, but their FEM was a “magic bullet” model.

Here’s a picture of an actual “real world” test.  It was taken at UC San Diego’s structural test lab.  The end of the beam is being pulled down by 500,000 pounds. 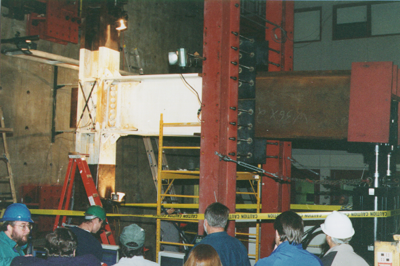 The report can be found at:  https://www.ae911truth.org/wtc7

At the bottom of the page is a button, “download the report.”

The last 24 hours I have been on a reading frenzy.  First Jeffrey Epstein and all his Mossad connections:

Then I ask myself if all this is going on who would do 9/11 and why and why drop the extra tower?  I am not saying I believe all this absolutely but I am looking with eyes WIDE open right now.  What does Mossad have to do with this?  Here is a Democracy now video

I can’t believe I am even thinking these thoughts.