From the Lawyer’s Committee for 9/11 Inquiry 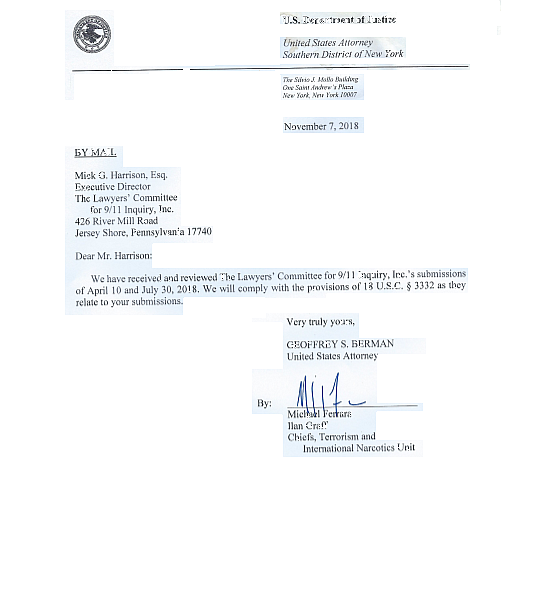 Here’s a link to the First Amended Grand Jury Petition, which was updated to include three additional federal crimes:

Excerpt from the Grand Jury Petition:

“The evidence presented in this Petition supports the conclusion that during the months preceding 9/11 explosive and/or incendiary devices were pre-planted at the WTC, and then on 9/11 these explosives and/or incendiaries were detonated and ignited causing the complete destruction of WTC1 and WTC2 and the Salomon Brothers Building (WTC Building 7). The detonations of these pre-planted explosive and/or incendiary devices on 9/11 at the WTC were timed and coordinated with the aircraft attacks on WTC1 and WTC2, and substantially contributed to the destruction of those three WTC buildings and their contents, and substantially increased the tragic loss of life that occurred on 9/11. The evidence presented below and in the accompanying exhibits permits no other conclusion — as a matter of science, as a matter of logic, and as a matter of law.

This evidence, which includes forensic and physical evidence, eyewitness testimony, and expert scientific analysis, deserves to be presented to and investigated by a special federal grand jury, or in the alternative a federal grand jury as soon as possible. The issue of whether the perpetrators, domestic or foreign or both, involved in the placement of the explosives included individuals acting across national boundaries is a matter to be investigated by and ultimately determined by the grand jury. The evidence available to the Lawyers’ Committee for 9/11 Inquiry, Inc. relating to who and what acts might have been involved will be presented in a supplement to this Amended Petition.”

Here’s a longish video from SGT Reports about the Grand Jury convening to investigate the events of 9/11. (The SGT Report video is 56:56 long.) There wasn’t any evidence included in the video that hasn’t been discussed on this thread. What I found particularly enlightening was that Grand Juries can last 18 month or longer. Their meetings are essentially behind closed doors and they have immense powers.

Wonder why Bush or Obama didn’t convene one to investigate the events of that day??? Hmmmm.

It’s not clear to me that a grand jury will be convened on 9/11.  The letter signed by Michael Ferarra, apparently an assistant US Attorney in the Southern District of New York, only says that they will comply with 18 USC 3332.

Although the requirements for empaneling a grand jury are pretty broad there should be some reason to think one would be in the “public interest.”

The various United States District Courts are instructed to “order one of more grand juries to be summoned at such time as the public interest requires.”  In addition, the Attorney General may request the District Court to summon a special grand jury in any of the larger districts when he or she believes the level of crimminal activity in the district warrants it.

“The grand jury [is] a unique role in our criminal justice system.”  It was born of a desire to identify more criminals for prosecution and thereby to increase the King’s revenues.  But the exclusive power to accuse is also the power not to accuse and early on the grand jury became both the “sword and the shield of justice.”

So, absent some indication that a federal District Court judge has ordered a grand jury, I wouldn’t get my hopes up that one is inevitable.

Thanks for that information. You are much more familiar with the judicial process than I am. Is there any way of finding whether or not a Grand Jury has been convened before the final results are published? Does 18 USC 3332 only require evidence being forwarded to a Grand Jury if one is convened?

I do get my hopes up every time something about 9/11 comes up. That this injustice hasn’t been addressed is the primary reason I’ve lost faith in the workings of our government. I now look at anything the government does with a jaundiced eye. Bringing this to trial would restore much of my faith. I guess I shouldn’t get my hopes up there, either.

The District Court may know nothing about it if they haven’t received a request for a grand jury, so the direct approach may work best.  Good luck.

I imagine the Lawyers’ Committee for 9/11 Inquiry, which originated the petition, will be following its progress very closely. They will almost certainly publish any activity on their website the minute it happens. https://www.lawyerscommitteefor9-11inquiry.org/

I contacted AE911Truth.Org because I thought I’d get a good answer quicker that way. I just got a reply to my question. The jury hasn’t been convened yet.

Curious as to how much of this is on point…Mueller took on the role of FBI Director on September 4th, 2001 (7 days prior to you-know-what).

Mueller’s History of Cover-Ups (Dig Within)

“Yes, in the summer of 2001, when the new Bush Administration suspected it would soon need a cover-up, Mueller was brought in for the job. Although suspect Louis Freeh was FBI Director in the lead-up to the crimes, Mueller knew enough to keep things under wraps. He also had some interesting ties to other 9/11 suspects like Rudy Giuliani, whose career paralleled Mueller’s closely during the Reagan and first Bush administrations.

Under Mueller, the FBI began the whitewash of 9/11 immediately. Mueller himself lied repeatedly in the direct aftermath with respect to FBI knowledge of the accused hijackers. He claimed that the alleged hijackers left no paper trail, and suggested that they exercised “extraordinary secrecy” and “discipline never broke down.” In fact, “ring leader” Mohamed Atta went to great lengths to draw attention to himself prior to the attacks. Moreover, the evidence the accused men supposedly left behind was obvious and implausibly convenient for the FBI.

Meanwhile, Mueller’s FBI immediately seized control of the investigations at the World Trade Center, the Pentagon, and in Shanksville, PA where United Flight 93 was destroyed. Under Mueller, leaders of the Bureau went on to arrest and intimidate witnesses, destroy or withhold evidence, and prevent any independent investigation. With Mueller in the lead, the FBI failed to cooperate with the government investigations into 9/11 and failed miserably to perform basic investigatory tasks. Instead, Mueller celebrated some of the most egregious pre-9/11 failures of the FBI by giving those involved promotions, awards, and cash bonuses.”

And keep them away from the areas that matter.

I wonder… if there is a dark web, why can’t there be a light web, where the good ten percent tip each other off about what is going on with the bad ten percent?