Quote from the article: “new discoveries and efficiency gains at existing fields mean oil supplies will abound for a long time to come”

They also make the argument demand will peak somewhere between late 2020’s to 2040 due to electric cars, etc….

Can’t wait for the Peak Prosperity folks to tear this one apart!:)  You guys should email the authors.

Quote from the article: "new discoveries and efficiency gains at existing fields mean oil supplies will abound for a long time to come"

They also make the argument demand will peak somewhere between late 2020's to 2040 due to electric cars, etc….

Can't wait for the Peak Prosperity folks to tear this one apart!:)  You guys should email the authors.

Hmmm….I am not familiar with the authors of this piece, but their opening sentence revealed themselves to be more rooted in ideas than reality:

The world is turning its back on oil.

Really?  Then we should see that in the data, right?  Here's the latest from the 2016 BP statistical review: 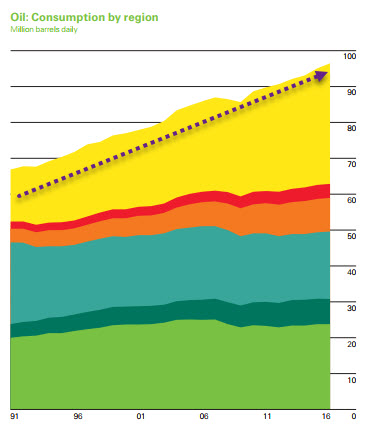 Except for the downward wiggle caused by the Great Recession this is a straight line upwards.  So no evidence yet that "the world is turning its back on oil" except by those who wish this to be a true statement.

The rest of the article is a mess of unsophisticated arguments and random data points that are better suited to a think tank position piece than something deserving of a scientific dismantling.

For example, their second point:

2. Is the world running out of oil?

No. The peak oil that’s talked about today is quite different from the concept that emerged in the 1950s, when M. King Hubbert, a Royal Dutch Shell Plc geologist, predicted that U.S. oil production would crest in the 1970s and the world would physically run out of oil.

That never happened, and new discoveries and efficiency gains at existing fields mean oil supplies will abound for a long time to come.

So much wrong here.

Hubbert never said "physically run out of oil."  He said that production would begin to decline.  This has happened to hundreds and hundreds of fields. 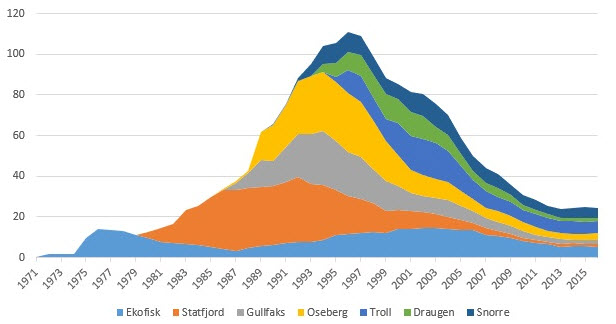 If only those North Sea operators would take advantage of those "efficiency gains" the Bloomberg writers referred to!  They could surely turn that peak right around and make the oil abound again!

More importantly, new discoveries, such as they are, are smaller, deeper and/or more distant making them vastly lower in net energy than conventional oil from days gone by.

The authors have zero awareness of the fact that high net energy oil is in the rearview mirror and have an unsophisticated view that "oil is oil" and are confusing quantity with quality.

Summary:  This article is a wish piece, not a serious review.   One of many, unfortunately.

Thanks Chris great info.  Your knowledge on this topic and analysis is much deeper then theirs obviously.  Reading this mainstream media article would have people believe that peak oil, or  abundant oil available at a decent prices is not a worry.  The article would have you believe that it is oil companies and oil producing countries that rely on oil exports should be the ones worrying about peak DEMAND.  Which as I thought, seems like a farce.

I was checking out the EIA website on US Field production of Crude Oil (https://www.eia.gov/dnav/) and it seemed to indicate that in the last month noted in 2017, there was almost the same amount of oil production as in one of the top months of 1971  (298732 thousands)   First of all, how is this possible and secondly, does this change any of your forecasts? I can only think it is the surplus of fracking and possibly just a blip.

It would be interesting to know what the net was and not the gross.

Thought I would share this opinion piece from Bloomberg on shale oil: