Biochar Article in the Press Democrat

Check of this article in the Press Democrat this morning on the Sonoma Biochar Initiative.  I'd like to give this a try.

Thanks for posting this link. I used 100 pounds of biochar when planting out 9 olive trees three years ago.

Only 6 of the trees got the biochar, I ran out after that.  I prepared a large planting hole, and refilled with 1/3 biochar, 1/3 compost and 1/3 native soil.  The remaining three trees got 1/2 compost 1/2 soil.  I think that first year the biochar trees did better, but now three years out all the trees look the same to me: same height equally healthy. I am not saying it did not help, maybe I needed to add more biochar, but I definitely did not get 100% difference in growth rate, maybe 20% initially.  I still think it is something that needs to be utilized more and tried to buy more this spring, but the place I got my compost from was temporarily sold out. I do plan on adding some to a hugelkultur bed I am starting soon.

LSS: your mileage may vary from the claims in that article.

It is important that before biochar is used it is infused with something like compost tea. Possibly the initial result came from the compost itself that was mixed in and that was used up in those first years. Actually if biochar is not infused it draws nutrients out of the surrounding soil. The main point, which is why our  Swallow Valley Farm agreed to be the location for the Adam Retort (it still is not on the property though we have enormous piles of feedstock ready–big logs mostly to be ground and fed into the retort when it arrives soon). Biochar is like a corral reef – a place of refuge for micro organisms as well as nutrients and most important, the carbon is sequestered and will remain for hundreds of years in the soil, as it did in the Amazon river basin. We will be giving some of the biochar to Green String Farm where they will be doing controlled experiments. Peter will be organizing demonstrations in the next few months in conjunction with some permaculture programs.

Thanks Benjamin for that tip. D'oh slap to the forehead for me.  Three years ago I read mixing the biochar with compost and aged manure (we have lots of chicken manure in our compost) was adequate.

I see from looking around at the interwebs three years down the line, there is more info about biochar out there. I suspect application rate also influences growth….I was probably on the low side initially and have not added any since then.  Would love to see it come down in price.  Now if only it could rid our neighborhood of olive fruit fly.

I've run numerous field trials with bio-char on my small farm.  In addition to charging the char before you use it, I recommend composting it along with horse and chicken manure.  I charge it in buckets before adding to my to-be-composted pile, then it's well mixed and piled inside a straw bale enclosure to heat.  It hits 160F within days, and stays hot for over a month.

However, the field trials I ran showed that the char only really makes a difference when nutrition is less than optimal.  A balanced hydroponic nutrient solution using bark as a substrate yields the same or better.

Overall, I doubt seriously that making your own bio-char (or buying it at the current prices) is worth it.  I'll probably do a few more trials, but I'm strongly leaning toward discontinuing my own production.

I would like to see a trial comparing properly made bio-char against well-composted tree bark.  My hugelculture beds seem just as productive as the char beds, with a lot less effort and cost.  Composted tree bark would probably have a similar nutrient content and CEC to char.  Maybe I'll try that next…

For the vineyards in the article, bio-char is an outstanding alternative to what they do now- burn huge piles of woody cuttings in the open.  Bio-char's real potential, in my opinion, is as a disposal method for otherwise polluting materials.  Growing biomass with the intent of making char isn't worth it, from what I've experienced.

Biochar Made from Human Waste? Introducing the Sol-Char Toilet

I include this here as only a "something interesting is happening with solar devices that kind-of includes the topic of biochar" type of post.  Certainly at the current technological level and a $12,000 price tag, this outhouse on is not on anyone's horizon.

Human waste from a Port-Potty is heated to 600 degrees F  in an airtight container (the "feces reactor") using sunlight focused with parabolic mirrors and fiberoptic cabling.  The cooked waste makes biochar. 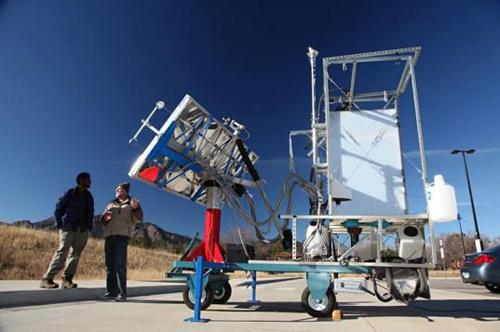 Eight parabolic mirrors collect sunlight which is then concentrated onto glass fiberoptic cables which feed the concentrated sunlight to a tank full of human waste heating it to 600 degrees F.  The fiber-optics allows flexibility in where the holding tank is located. 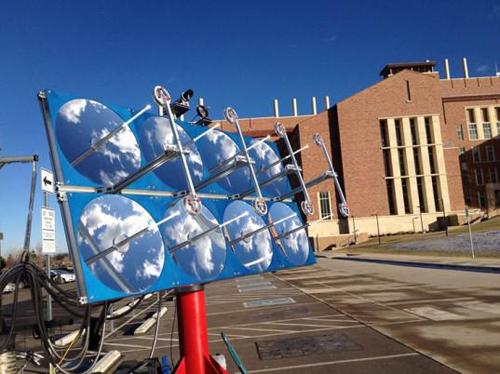 Hmmm, I wonder if this heat concentrator could also be used for a very effective solar oven….