Bill and Melinda Gates getting divorced

The wife and I know several couples that divorced in their 50’s,one couple in their 60’s!

I know ,it sounds illogical.

No one wants to grow old alone.

The common reasons of these divorces, were ,boredom,selfishness,just staying together,because of the kids,as well as just sick of the type of person their spouses had become.

A lot of it due to the internet.

I do not judge folks on divorce,we never really know the true  way things are between a couple.

My best guess,is that Melinda wanted to live life fully,have some fun before she dies,in contrast to Bill ,who was “Married to his “other”wife.

That wife being ,his intense need to use his wealth to better the world ,and relieve human suffering.

Melinda may have thought they have done enough,that the underbelly,public perception with Bill,and his work, and all the baseless attempts by others ,calling him EVIL,incarnate,was too damaging to her offspring.

I could be wrong,but imho.

its as simple as that.

I extremely disagree he is worried about money,or a tax bill.

He GIVES his money away.

I have found Alex Jones,the same as Rush Limbaugh(rest his soul) to a point.

Both take the Republican principles ,that I DO believe in,and support,and corrupt them.

They both feed the rumor mill,then justify the corrupted facts, with the following of believers, that they created.They use loose facts that confuse,and mislead.

Pretty much both of their M.O.’s,among other behaviors.

Sometimes they discover grains of truth that are important,though.

But most times,they turn the  very values,and the principles that are important to the republican party into something that they are not.

All the  while waving the” right wing” flag, vigorously.

Imho,our past president did something similar.

But I ,DO support some of his election promises,(Such as supporting law enforcement,),while strongly disagreeing with others,such as his  need to divide this nation.

Mainstream media is now going after Bill. I never felt Bill was accepted in the Elite community. He was their useful idiot. They got what they needed from him and now trashing him

No,Mainstream media is NOT defined as FOX news.

It IS, a bit larger then that.

Any media that supports Mr.Trump,will demonize,any one that believes vaccines are the way out of our current predicament.

Believers ,and pro-crypto websites,will tell you ALL transactions will be crypto soon.

Until the crash,then few will admit they pushed it.

Did your friends have the affluence to live separate lives without a divorce?  I too have seen couples split after the kids graduate from high school or college.  They needed to get away from one another.  Bill and Melinda could easily do that without a divorce.
Did your friends have the challenges that come with splitting up all the assets owned by the Gates?  This is a monumental task for no obvious gain.  I don’t know enough about tax law.  The Bezos did the same thing and there may be lots of new tax laws targeting the rich coming town the pike.

Giving your money to the charities you deem important is not the same as paying more in taxes.  Any time he wants he could send a big check to the US Treasury, but he doesn’t.

As for “mother bird” syndrome, they are still his offspring too. Divorcing him will not change how their kids are treated.  If your theory is correct and the kids are in danger, she has a better chance of protecting them if she stays in the marriage and they have a united  front.

What does the “piece of paper” change?  Finances, taxes and medical decisions (next of kin) are what I can come up with off the top of my head.

Mainstream media is now going after Bill. I never felt Bill was accepted in the Elite community. He was their useful idiot. They got what they needed from him and now trashing him

It could also be that Gates was one of the team, but now he’s been exposed, and they are cutting him loose.  And/or this whole divorce thing is hinting that there is bad news coming, and that Melinda is just the first rat to desert the sinking ship.  And the Oligarchy are rushing to distance themselves from Gates so as not to be dragged down with him.

I have a possibly-interesting event regarding Mr Gates.  It has to do with a large RCT in Africa, using CQ, back in 2005, on pregnant women who were also HIV positive.  Endpoint was “viral load.”

Does a 300mg/week dose of CQ decrease HIV viral load?  If so, by how much?  This trial would have told us, using more than 2500 HIV+ pregnant African women as the test subjects.  Certainly it would have been large enough for significance, if there was a signal to be found.

This trial was funded by “The Gates Malaria Partnership.”   (The record of this sponsorship was later changed – much later – to the LSHTM, which Gates also funded)  What’s more, the trial is marked completed, and the PI got her dissertation approved – roughly the same name as the trial – and also graduated with her PhD from a fancy European university.

To this day I wonder: does chloroquine work as an HIV treatment? In pregnant women?  The third world could sure save a bunch of lives and a lot of money if the answer was “yes.”  First world might benefit too.  Chloroquine is a relatively benign substance.  It has anti-HIV activity – just like it has anti-SC2 activity.  Does it work?  We will never know.

No results were ever published.

Is it possible that this trial killed a bunch of African babies?  Yes, that’s possible.

Is it possible that “some Pharma interest” managed to stuff the results of a successful trial that showed a really cheap drug worked in stopping a then-critical viral disease, namely HIV?  Prior to COVID, my answer would have been: “nah, that’s just crazy.”

After seeing the whole COVID “No Treatments For You”game play out, I’m thinking this is probably not the first time this particular con has been run.

There might be a whole lot of dirty laundry in the hamper, just waiting for someone to expose it – once the “popularity factor” drops off, and his immunity to criticism disappears.

Below find a snap of the old (c.a. 2008) record of this trial.  The current trial record doesn’t mention Mr Gates at all.  It’s all about LSHTM.  Mr Gates is safely at arms-length.

Unless you know how to go back in history. 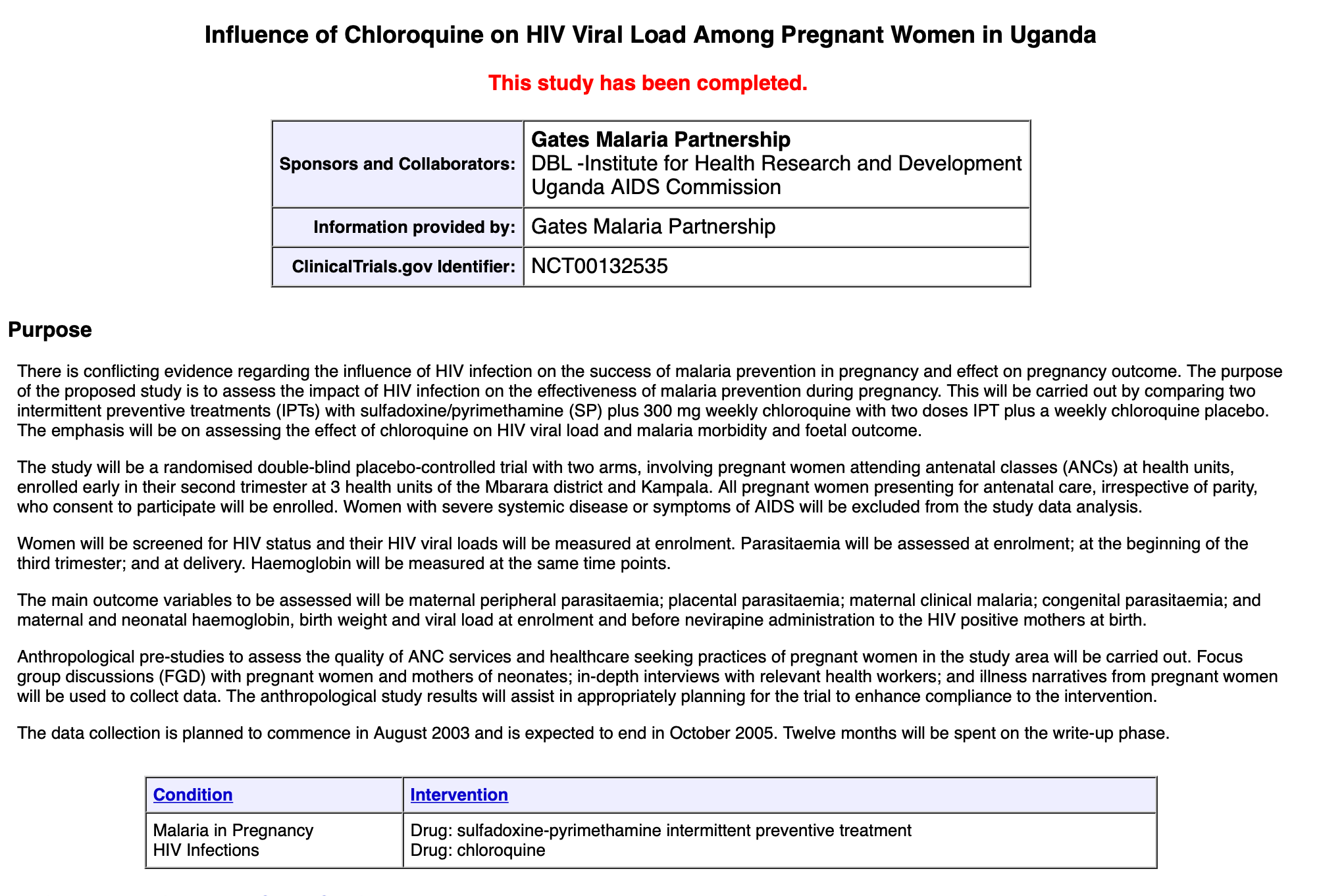 To my knowledge,Divorce is about freedom.

$$$ is NOT an issue with these folks.

Melinda simply was done with fighting.

Fighting against the rumor mill that hurts her daughter,The daughter,that YOU and others here find it “IN YOUR RIGHTS” to demean her father!

If it was YOUR daughter??

How would you feel??

Distancing yourself from Bill,would save your daughter.

The Gates foundation attempted to find a solution ,to a situation that would have suffered brutal death,had they not been involved,anyhow.

perhaps Jonas Salk should have just read a good book!

And not involved himself…

In a normal marriage yes,I agree.

Not, in this high profile story.

Its their perception of self worth.

Do you know how many suicides the internet and social media has been responsible for?

Melinda is trying to distance herself,and her daughter from all of this.

I would do the same.

Re-trying after this comment went into the spam abyss… stupid thing!!

I think you are on the right track with him being cut loose, Dave. I like to read the comments on other forums as well, and saw this thought provoking one this morning:

Off this topic (but not Off Topic).
From another forum, in breach of copyright.
Re: Gates.
‘Strange that they are taking him down. For months, they have presented Gates as the smartest guy on the planet, better get your vaccine.
Now, he is being molded into scapegoat.
My guess? Far fewer people are getting vaccinated than told.
Covid is now officially the cause of only 5% of the fabled 500,000 in US and 3,000,000 ww.
That is 25,000 in USA
VAERS has stated that 5,000 have died from the jab.
for prevention of 25,000 dead (old and fat people)?
They have a disaster and they will look like morons.
They need a scapegoat.’


Reiner Fuellmich, the lead lawyer for the Nuremberg 2.0 class action lawsuits posited that ‘they’ did not anticipate all the vax deaths and adverse reactions. If this is indeed true, that their plan has gone off the rails, then it makes sense to me that ‘they’ will want to distance themselves as much as possible from this unfolding disaster, and the front man who played a key role in fomenting it all.

It seems to me there is ALWAYS a fall guy (or people) to deflect attention. That is how ‘they’ roll, right? Their ace up the sleeve is always having some kind of dirt on someone important to first of all get them to do what they want, but then to also to be able to cut them loose if things go south. If people were to go back and read Whitney Webb’s exhaustive investigative series on Epstein, this will be laid out for you in spades. The fact that Gates was associated with Epstein is a big deal. As Dave F. has said, “who has the tapes?” There is a lot of serious, despicable dirt on a lot of important people.

It is possible that just as Gates has been built up to be a global saviour, he will now be taken down and made into a global pariah. But the wizards behind the curtain, The Pilgrim Society*, will just move on the to next fall guy(s), and they will not stop at anything, until they are destroyed.

*altered link -insert amer in place of the ****

The dam is leaking more furiously now… how long until it bursts? How many lives damaged and lost in this first attempt to cull and control us?