Being pressured by parents to get vaxxed. Advice needed

I’m wondering if anyone can provide some advice for dealing with family members over the issue of vaccinations.

I’m a 33 year old healthy male and I had COVID this past February. It was a positive test with all the symptoms that come with it (loss of taste and smell, lethargy, achy muscles). I recovered naturally and have chosen not to get vaccinated since it doesn’t seem necessary given the natural immunity factor and my overall health profile. I’m also skeptical of the safety and efficacy factor pertaining to it. My mom has said I cannot come home for the holidays without getting vaccinated. I told her that’s fine, I’m willing to sit it out this year. She relented and said we can compromise by taking a weekly negative test which is better. However, I don’t see this issue clearing up anytime soon and I have to assume that it will only get worse before it gets better.

We already had a discussion about this a few weeks ago. Perhaps I didn’t explain my stance and points clearly enough but she really thinks I’m a kook now. The “us vs. them” scenario that Chris has talked about is playing out before my eyes in my own life and it really is troublesome and emotionally stressful to me. This is the only place on the internet that I can come to and feel safe asking for advice. My mom is not an intellectually inclined or enlightened person and will have a very hard time wrapping her head around points, facts, and data that run counter to the mainstream narrative.  I need help in composing an emotionally intelligent response

I was going to search and find the links about the following:

1) The recent Lancet article showing the vaccinated are just as likely – if not more likely than the unvaccinated- to spread the disease.

2) That natural immunity is far more powerful than vaccine immunity.

3) The risk of adverse events – especially  heart related – is now beyond dispute.

4) That – at your age – getting vaccinated does not pass the cost/benefit test.

But I have a question first. Will any of that do any good? If it won’t do any good, then you are dealing with an emotional issue.

If that is the case, I’ll leave it to someone else to address.

I know how I would handle it. Recently, I was asked to take a Covid test (just one test) as a pre-requisite to attending a family Thanksgiving dinner. I agreed. But the test machine did not function. Really angry, I called up and said “the hell with this, I am sick of this nonsense, I just won’t come.”

They relented. That is what I did.

If, on the other hand, for you, logic might save the day. Let me know. If you need the links. I will supply.

Did you get the chickenpox?  Or the vaccine?

Based on your age my guess is that you got the illness.  So ask your mom why she never got you the varicella vaccine?  Then connect the dots for her and explain since you have already had Covid you have been inoculated, you just had the virus enter through your nose instead of a needle.

So sorry to hear back2basics. I wish I had an answer for you. I am in the same situation as you. My family just ignored the holidy with no conversation. It was a very hard day this last thanksgiving but I decided or in my view. There is nothing it seems like Chris spoke Us vs. them mentality. All my mom keeps saying is evryone has gone crazy. They will never see their part in this. It has been six months now. Really sad. I think this says it best.

Of all tyrannies. A tyranny sincerely exercised for the good of its victims may be the most oppressive. It would be better to live under robber barons than under omnipotent moral busybodies. The robber baron’s cruelty may sometimes sleep, his cupidity may at some point be satiated, but those who torment us for our own good will torment us without end for they do so with the approval of their own conscience.

My advise is to stand firm in your decision. You obviously don’t live in the same place a your parents. You really don’t need to defend yourself. You are an adult. I am a parent of 2 grown adults. My eldest made the decision to take it back in May believing she was doing the right thing. I’ve been worried sick for her ever since and send her information weekly to get her to wake up and advised against any booster. My son is 24 and has listened to me and does not want the “vax”. Remember your Mom will always love you. Your personal health and freedom is ultimately your responsibility. Forget the emotion.

Do not, under any circumstances, take the mRNA vaccine.  You have checked off ALL the boxes.. young, healthy, and the lucky bearer of strong, natural immunity as a result of prior symptomatic infection.

It would behoove you to help your mother understand that the vaccines are prone to failure, and that she should pursue a protective prophylactic regime if she is not already doing so – Vitamin D3 supplementation being number one on the list.

The vitamin D factor is a fairly neutral, non-confrontational way to shift the conversation away from scary things and toward self-determination and scientific truth that underlies your well informed desire to steer clear of the vaccines.  The truth is, if you were to take one of the mRNA vaccines and let that over-write your natural immunity with Thor’s hammer of original spike protein antigen, you will be more likely to get reinfected – in other words, objectively, you will become more of a danger to your mother, vs less.  The mechanisms behind this are not entirely clear.. but the effect is;

The underlying assumption that we generally have is that Covid is a one-time event for any given person. The vaccine would prevent, postpone, or alleviate it, but once you had Covid, that’s it.

It almost certainly is a one time event in unvaccinated people who had Covid with symptoms, as opposed to a high-cycle-threshold PCR test without symptoms. But could it be that “Covid vax” unsets natural immunity and actively prevents proper multi-factor natural immunity from forming?…….

back2basics–I found it helpful to gently tell my mom that I understood she was worried about me and didn’t want me to die or live a long-covid life. I’ve thanked her for loving me so much that is trying so hard to protect me from something truly frightening. I let her know I couldn’t help her with her fear, but I could assure her I’ve done my homework about keeping myself safe, and that we share the same goals–safety and a life well-lived.

I’ve stopped sending research-based information because it hasn’t made a difference. Gently standing my ground without arguing and being open to her fear has helped the most.

What you said reminded me of the speech I had ready if anyone during my Thanksgiving visit tried to convince me to get vaccinated.

I was going to say:

“I understand that you believe what you have been hearing on television and in the press. I understand that. If you believe that is a valid basis for forming an opinion, I will respect it and not try to change your opinion. By the same token, I do not believe that is being broadcast on television or being portrayed in the press. I would ask you to respect my opinion.

Now I know that you believe that I am badly misguided. But you must understand that I feel the same about anyone who believes the things being broadcast on television and repeated in the press. You have your reasons, I have mine.

Fortunately, no one brought it up.

Probably because I have the reputation of both being very well read and also of being a freaking lunatic when people push me too far.

Although this link doesn’t address issues with family, there are forms to give to HR departments and school districts to highlight the risks associated with the vaxxine. One of these might help your parents see that getting vaxxinated isn’t a risk-free venture.

Given your age, health, and prior exposure, there isn’t much (if any) benefit to getting jabbed. The risks are real. Have you noticed all the young vaxxinated athletes dying of heart attacks recently? Stillborn children are an issue as well.

Frankly, you are more at risk being with them than they are being with you. They can still harbor the disease without showing symptoms. Coronaviruses mutate prolifically. Most of the mutations aren’t viable. Every once in a while, a mutation occurs that can evade the host’s protections (either vaxxination or antibodies from prior infection.) That mutation can flourish in the previously vaxxinated as well as the unvaxxinated. That’s why boosters are being required. It is also why boosters will continue to be necessary. Do you really want to get on that train? It’s better to keep your personal terrain (vitamins/minerals) up-to-snuff to fight off the infection.

I’m with Mike From Jersey on this one. It should be a science-based issue; however, it has become an emotion-based issue. You can argue science-based facts and it won’t make a bit of difference to those who use emotions to make decisions. About the best you can do is call their bluff and say, “Fine. I probably won’t ever see you again because I won’t get the vaxxine until I’m convinced that the benefits outweigh the risks.”

Parents want their children to comply with their wishes. They also want to spend time with you. If you draw a line in the sand and stick to your guns, they’ll likely relent. You might even gain some respect and admiration from them.

I think the issue is your mom is scared.  Having some empathy and compassion to help her understand she doesn’t need to be scared will go much farther.

The vitamin D graph might be the understandable/actionable data that can help her move away from the fear. 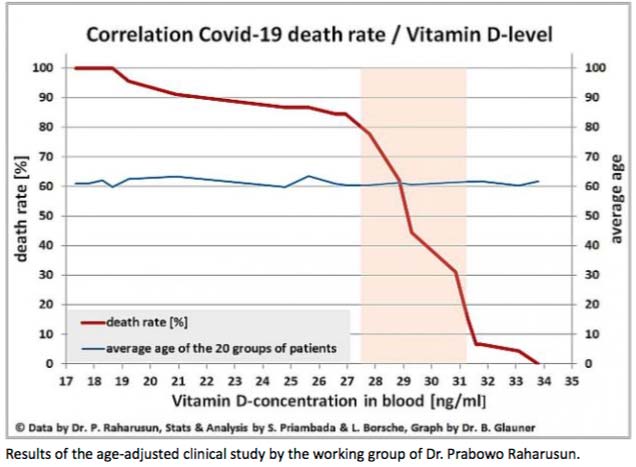