Bwahahaha.  The Mandate is apparently Staggeringly Overbroad, according to the 5th Circuit Court of Appeals.

Even Trusted News Initiative Member Reuters had to actually file a story.  How awful that must have been for them.

(So – any association between Reuters And Pfizer??  Well, the Chairman of Reuters just happens to sit on Pfizer’s Board!!  Ouch.  So this mandate story really has got to hurt.  https://divergemedia.ca/2021/06/28/thomas-reuters-foundation-chairman-is-also-board-member-at-pfizer/  I digress)

Nov 12 (Reuters) – A U.S. appeals court on Friday upheld its decision to put on hold an order by President Joe Biden for companies with 100 workers or more to require COVID-19 vaccines, rejecting a challenge by his administration.

A three-member panel of the 5th U.S. Circuit Court of Appeals in New Orleans affirmed its ruling despite the Biden administration’s position that halting implementation of the vaccine mandate could lead to dozens or even hundreds of deaths.

“The mandate is staggeringly overbroad,” the opinion said.

“The mandate is a one-size-fits-all sledgehammer that makes hardly any attempt to account for differences in workplaces (and workers),” Circuit Court Judge Kurt Engelhardt wrote for the panel.

And here’s a snap of (part) of the ruling: 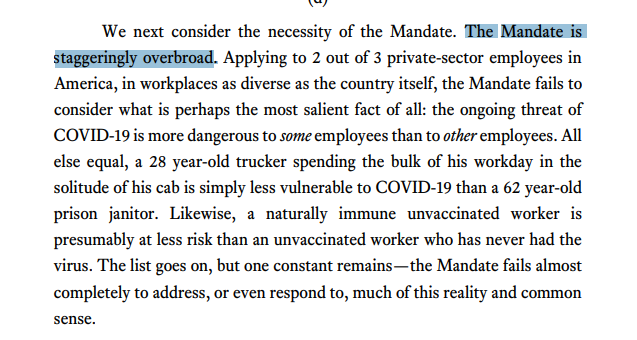 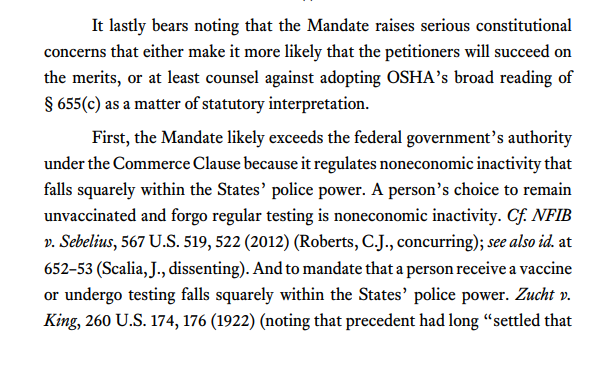 Maybe one of you legal eagles can dig up the original ruling?

Fantastic news!  God bless the 5th Circuit Court of Appeals!  Thankfully there was also strong constitutional basis to very well support their decision and too, it seems the mandate defense by Biden team left gigantic holes for the court to easily drown the mandate with.

The hospital where my wife works has issued the CMS mandate.  They have indicated anyone without an exemption or the jab will be terminated.  The termination status will be reported as a voluntary resignation and not eligible for unemployment benefits.  Sounds pretty dirty to me.  Is this legal?  Any labor attorneys out there who can comment?

I can tell you right off the bat that the “police power” language is important. “Police power” is a metaphor for “general legislation as to citizen welfare.”

“Police power” always belongs to the States and not to the federal government.

That doesn’t mean “we win.” Law (like everything else) has become highly politicized.

I have been able to find a copy of the decision. I am reading it right now.

Thanks Mike!  Perhaps – a forum post when you’ve sorted it out, so it doesn’t get lost?  If I might be so bold as to ask?

Okay, I read the opinion.

Consider this quote from the opinion:

Thus, courts have uniformly observed that OSHA’s authority to establish emergency temporary standards under § 655(c) “is an ‘extraordinary power’ that is to be ‘delicately exercised’ in only certain ‘limited situations.’” Id. at 370 (quoting Pub. Citizen, 702 F.2d at 1155).14

But the Mandate at issue here is anything but a “delicate[] exercise[]” of this “extraordinary power.” Cf. Pub. Citizen, 702 F.2d at 1155. Quite the opposite, rather than a delicately handled scalpel, the Mandate is a one-size- fits-all sledgehammer that makes hardly any attempt to account for differences in workplaces (and workers) that have more than a little bearing on workers’ varying degrees of susceptibility to the supposedly “grave danger” the Mandate purports to address.

It is clear that a denial of the petitioners’ proposed stay would do them irreparable harm. For one, the Mandate threatens to substantially burden the liberty interests of reluctant individual recipients put to a choice between their job(s) and their jab(s). For the individual petitioners, the loss of constitutional freedoms “for even minimal periods of time . . . unquestionably constitutes irreparable injury.” Elrod v. Burns, 427 U.S. 347, 373 (1976)

The part of the opinion that really hit me is this:

… the Mandate’s true purpose is not to enhance workplace safety, but instead to ramp up vaccine uptake by any means necessary.

In legal terms, that is what is called “cut the crap” admonition. It is a rare judicial recognition of lawless activity on the part of the government. If the American media were honest, they would report that excerpt as meaning that Biden attempted to force mandatory vaccinations on individuals in clear violation of the law.

Now, so you don’t get over optimistic. This is just one circuit. The Fifth Circuit covers Louisiana, Mississippi, and Texas. Overall, there are 13 different Circuits covering various areas of the United States. For instance, I practiced in the Third Circuit (New Jersey, Pennsylvania, Delaware and the Virgin Islands.) Nationwide, there are 12 Circuits plus the DC Circuit for a total of 13. The Fifth Circuit is just one of these 13 Circuits. It is common for Circuits to disagree. The Supreme Court can (but need not) resolve disagreements between the various circuits. My gut feel is that the Supreme Court would resolve a dispute if different Circuits come to different decisions on this issue since this is such a high profile issue.

The good news is that Supreme Court Chief Justice Roberts has been very supportive of Constitutional Rights. I only had one case before the United States Supreme Court so I can’t really predict, but this decision is a good start.

Someone posted a link with resources for employees under such threat. Let me try and dig it up for you.

@Steve : this is from @Broadspectrum

Go to The Healthy American.  Just type it into your browser.  Peggy Hall is the true expert on what you need to do.  Take her advise.

The fact of the matter is ALL of US are already protected under Title VII of the 1964 U.S. Civil Rights Act from being discriminated against because of our religious beliefs.

No one can force, coerce, threaten, intimidate or harass you into doing something that violates your sincerely-held religious beliefs.  We already have this exemption. No one has to give it to us.  They MUST ACCOMODATE us by established law.

Mandates are not LAWs.  We have 3 branches of government:  The Executive, The Legislative and The Judiciary.  Which one of these 3 branches makes the laws for our nation?

The Legislative branch makes the laws.  The Executive branch does not make law. That means no president, governor or mayor or any of the departments under The Executive branch can make a law.  That’s why all of the mandates are UNCONSTITUTIONAL.  Peggy Hall expertly explains all this over at The Healthy American.  Lawyers go to her for advice and to gain the understanding of the law.

I have been so surprised or should I say shocked by how so many Americans don’t understand this.  The education system in the nation has destroyed Civics as a course of study so that Americans would be ignorant of how their own nation is designed.

This decision will embolden the rest of the country, and elsewhere, to double down on fighting the mandates. The Unity Project, The Kaiser strike, police and firemen strikes are sending a strong message. The opposition is organizing.

TPTB must have known, as they gamed out this master plan, over the past 20+ years, that their toughest opposition would be conservatives in the US (especially in the South and Midwest.)

They used Trump to shrink the GOP, so small that a legitimately-elected Prez coulda drowned it in a bath tub. But Grampa Joe is so disoriented, they can’t let him anywhere near a bath tub.

The GOP has warned, for years, that the Dems wanted to take their guns and impose a NWO. I dismissed all that as crazy talk. Turns out that really IS what Bill Clinton, Soros, The Rockefellers, and Bush41 were planning.

Democrats took bribes from big pharma, then fell for the empty promise of a green new deal. Progressives are now shills for corporate America. Idea for book title: ‘Unsafe At Any Dose?’

When push comes to shove, the GOP is standing up for freedom, the rights of individuals, and the Constitution.

As a former Dem, I feel betrayed. The leaders of the party sold us all down the river.

It appears as though TPTB wanted to use Dems and independents to isolate / marginalize the GOP. But that plan failed. The vaccines were killing people, from the start, and conservative media got that message out, despite all the censorship.

If TPTB had gotten the US to a 70% vax rate by 7/4/21, they could have imposed state-wide (or regional, or air travel) vaccine passports, to exclude the remaining 30% from society. That would have given them enough leverage to get us above 90%.

Lynette Zang said, again, today, that the central banks aren’t in control of the markets, the traders are.

What does that mean for The Great Reset?

That leads to even more money printing, hyperinflation, food shortages, civil unrest, meanwhile the criminals escape justice, in their $500M yachts, or their underground bunkers. We need a counterplan, or else millions will die from hunger and/or the vaccine. For starters let’s stop shipping our food stocks to China. End the Vax. End the Fed. Paper ballots. Nuremberg trials.