An objection to theories of hyperinflation

It seems to me that the modern fiat monetary system is based on relative values — not absolute.  It seems that many critics of fiat currency are uncomfortable with a currency being valued relative to other currencies rather than tied to an absolute commodity in the physical world.  Where is the justification in condemning fait currency as unsustainable just because one has a “gut” negative reaction to relative valuation rather than “absolute” valuation?  I agree that resource and environmental limitations will restrain exponential growth in the future, but I don’t see a crash but rather a plateau that extends until consumption is reduced and alternative energy supplies are sufficiently in place to lower the price of energy enough so that sustainable growth can take place (see my critique of peak oil in the peak oil crash course discussion forum).

The crash of 2008 occurred because banks and corporations did not have enough reserves to cover their exposures to more-than-expected defaults.  As you know from studying inflationary banking, when defaults occur money is eliminated in this system.  The crash of 2008 resulted in a massive crater in the U. S. money supply.  If the government did not step in to provide reserves to the banks and corporations, these defaults would cascade through the system and lead to a total collapse.  Yet, from many on the internet I hear that this government intervention is going to cause hyperinflation?  Did these people not notice the huge drop in the money supply?    This creation via government debt was a stop-gap to replace the devastation of money in the bank-credit monetary supply.  And if inflation begins to accelerate due to velocity of this stop-gap money, then all the better!  Understandably, banks are correctly holding onto these reserves because they just got burned by not having enough reserves!  Once they feel sufficiently stable, they will increase lending.  Then the fed can raise interest rates and balance out the money supply at a low growth rate.  I just don’t see the problem with this.  It’s almost as if the hyperinflation theorists ignore the huge destruction of our money supply in the crash of 2008.  Right now, I think we are at the point where the banks and corporations are beginning to feel comfortable again, and the fed will begin raising rates if inflation begins to get out of hand.

Where is the justification in condemning fait currency as unsustainable just because one has a “gut” negative reaction to relative valuation rather than “absolute” valuation?

Hyperinflation: The Story of 9 Failed Currencies

Great read on the histories of inflation and hyperinflation

US Dollar to Gold Ratio: The dollar has been falling against gold for ten years. Well before the crash of 2008 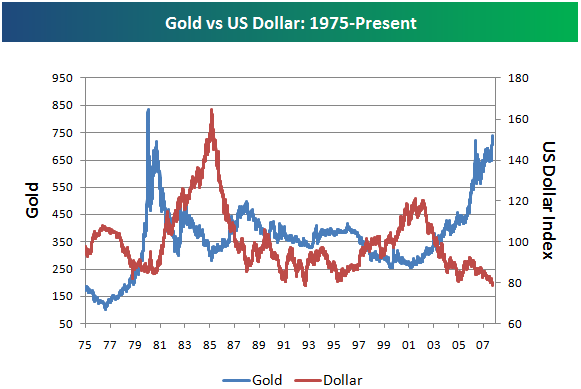 The crash of 2008 occurred because banks and corporations did not have enough reserves to cover their exposures to more-than-expected defaults.

So Much is wrong with this statement that I just don’t know where to begin…how about here?

Over the Counter Derivatives, Credit Default Swaps. These were all deliberate scams created by bankers. Not an accident. Deliberate fraud. There is so much written and discussed on this site and elsewhere that I let you do the searching if you’re interested.

The crash of 2008 resulted in a massive crater in the U. S. money supply.

…It’s almost as if the hyperinflation theorists ignore the huge destruction of our money supply in the crash of 2008.

You are off your rocker.

You said, “the fed will begin raising rates if inflation begins to get out of hand.”

If real inflation is, let’s say, 6%… (and some like John Williams of Shadowstats argue that it’s closer to 8.5%), then to really quell inflation.. the FED will need to raise interest rates to ABOVE the rate of inflation in order to create a positive return for money saved.  Don’t you see the box Bernanke is in?  He can’t quell real inflation without bankrupting the country through increasing the costs of carrying our debt.  He does not have the toolbox that Volcker did in 1980.

Read some Gonzalo Lira, take two aspirin, and come back to check the Silver price in the morning;

You are welcome to your opinions, but they will leave you a very poor and sorry paper bug someday if you don’t study this more.  You and Prechter and Nicole Foss (and Ilargi) can warm yourselves together around a bonfire built with the paper money you were all hoping together would gain value in the always eventual deflation.

Interview: Jim Sinclair on Gold and the World Financial System

Hera Research Newsletter (HRN): Thank you for speaking with us today.  You are one of very few people who have tried to warn investors about OTC derivatives.  Why are OTC derivatives a problem in your opinion?

Jim Sinclair: Over the counter (OTC) derivatives are the reason we are going through what we are going through now.  An OTC derivative is a kind of wager on what something will do.  Up until 2009, most of these wagers had very little, if any, money behind them and, if the direction you bet on didn’t come to fruition, the amount of leverage resulted in extraordinary losses.  There was a major rollover in derivatives tied to real estate in 2008, as well as in other types, such as those tied to sub-prime auto loans.

HRN: Did OTC derivatives destabilize the financial system in 2008?

HRN: OTC derivatives are the real reason for the bank bailouts?

Jim Sinclair: That is a fact which can in no way be argued away.