American doctors are holding a “White Coat Summit” on Capitol Hill TODAY and tomorrow (July 27-28) to address what they call “a massive disinformation campaign” surrounding the Chinese coronavirus to which “American life has fallen casualty.”  “If Americans continue to let so-called experts and media personalities make their decisions, the great American experiment of a Constitutional Republic with Representative Democracy, will cease,” reads the event’s information page.”

You really need to watch Dr Stella Immanuel, a West African born and trained Doctor, who now practices in Houston.  She has had 100% success on over 350 patients with HCQ + AZT + Zinc.  See her impassioned speech during the summit press conference held on the SCOTUS front steps (Watch the video from 5 min to 11 min):

This group is doing an excellent job presenting the science and studies behind HCQ and (more importantly) sharing their frontline success treating COVID-19.   A lot of this information will not be new to the PP Tribe, but it is awesome to see this many Doctors organizing together in a summit to share this message in incontrovertible form in Washington, DC.  It is so inspiring to see DOCTORS standing up for their patients.  They are calling us to action.  I will be phoning my Governor, both Senators, my Congressman and local hospital directors to tell them I want my doctors to be able to prescribe HCQ now.

You can get more information from their website at  https://www.americasfrontlinedoctors.com/

Westxmom- Thanks for posting this info here. Just watched videos of Dr. Immanuel take on the talking heads. She called out Dr. S. Gupta on CNN for not ever treating a Covid patient, but disparaging HCQ. She challenged all of them; Fauci, Chris Cuomo, etc. to take urine tests to prove they weren’t taking HCQ prophylactically.

Some hope in the sea of propaganda.

They compare COVID deaths per 1MM population (not cases, to avoid the testing differences).  The bottom line is that in sub-Saharan Africa, where malaria is rampant and people take HCQ prophylactically, COVID deaths are >2 orders of magnitude lower than Italy, Spain, USA (50:44 and below)… 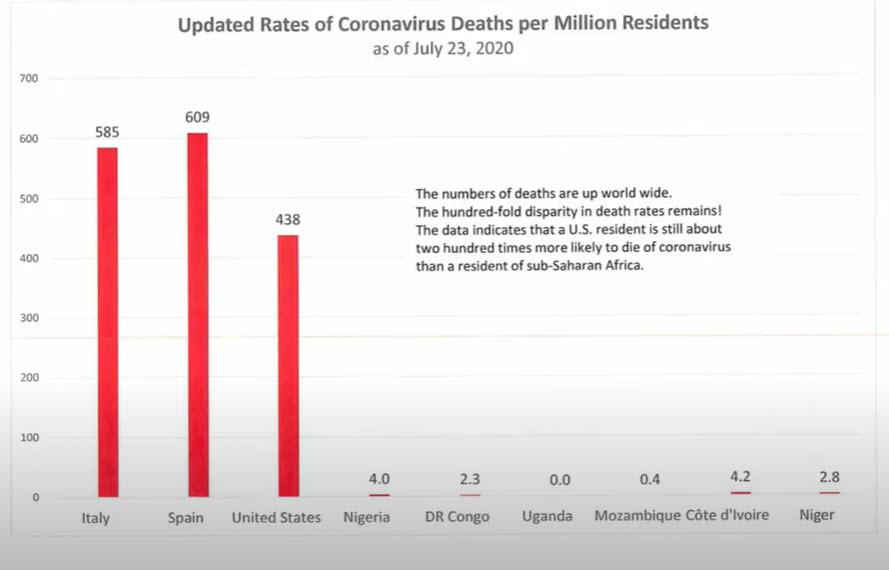 is there any way any where to find out who these people are? because all i’m seeing is summit summit summit – but i can’t find a single thing that says who they are or where they came from. there’s not even an About section on their website.

This is a bio on each speaker…

I know Dr. Stella personally – she is awesome.

She successfully treated both my son and daughter in law for Covid using her regimen. Results were nearly immediate in both cases, in spite of my son’s case having progressed significantly.

She also has a Christian ministry in Houston (Firepower Ministries) that is worth supporting. The lady can preach !

Article published in the Washington Examiner
Yale epidemiologist says hydroxychloroquine could save up to 100K lives if used for coronavirus
by Emma Colton, Social Media Manager
| July 22, 2020

An epidemiology professor at the Yale School of Public Health said hydroxychloroquine could save 100,000 lives from the coronavirus but added that the controversial anti-malaria drug has instead been used in a “propaganda war.”

“I think 75,000 to 100,000 lives will be saved,” Dr. Harvey Risch said in an interview Tuesday evening with Fox News’s Laura Ingraham after she asked if thousands of lives could be saved if a hydroxychloroquine stockpile was released.

“It’s a political drug now, not a medical drug, and that’s caused the complete population’s ignorance. And I think we’re basically fighting a propaganda war against the medical facts, and that color is not just the population of people, how they think about it, but doctors as well,” Risch said earlier in the interview.

Risch also addressed colleagues who have denounced using the drug as a treatment for coronavirus patients.

“There are many doctors that I’ve gotten hostile remarks about, saying that all the evidence is bad for it, and, in fact, that is not true at all,” Risch said, claiming the medication can be used as a “prophylactic” for front-line workers.

“All the evidence is actually good for it when it is used in outpatient uses. Nevertheless, the only people who actually see that are a whole pile of doctors who are on the front lines treating those patients across the country, and they are the ones who are at risk of being forced not to do it,” Risch said.