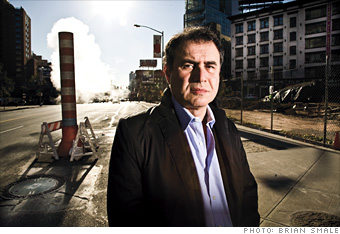 We
are in the middle of a very severe recession that’s going to continue
through all of 2009 – the worst U.S. recession in the past 50 years.
It’s the bursting of a huge leveraged-up credit bubble. There’s no
going back, and there is no bottom to it. It was excessive in
everything from subprime to prime, from credit cards to student loans,
from corporate bonds to muni bonds. You name it. And it’s all reversing
right now in a very, very massive way. At this point it’s not just a
U.S. recession. All of the advanced economies are at the beginning of a
hard landing. And emerging markets, beginning with China, are in a
severe slowdown. So we’re having a global recession and it’s becoming
worse.

For
the next 12 months I would stay away from risky assets. I would stay
away from the stock market. I would stay away from commodities. I would
stay away from credit, both high-yield and high-grade. I would stay in
cash or cashlike instruments such as short-term or longer-term
government bonds. It’s better to stay in things with low returns rather
than to lose 50% of your wealth. You should preserve capital. It’ll be
hard and challenging enough. I wish I could be more cheerful, but I was
right a year ago, and I think I’ll be right this year too.

Thanks Kahibe for the good article,

Let me give you my impressions of each prediction (my use of the word "ought" going forward in my posts is a reflection of the book Financial Reckoning Day):

Nouriel Roubini – I agree except the depression ought to be worse than he predicts.  Nouriel doesn’t comment on the impact of the rampant money creation because traditional economists (of which he is one) don’t focus on this.

Jim Rogers – ah, breath of fresh air.  I very much agree with his insights about physical commodities going up in relative price against labor – the impact of this ought to magnify the impact of the depression – this should be the siren call for us to take heed of the impacts of this.  I’ve seen comments here and there suggesting that in the Depression of the 1930s people returned to the family farms to ride out the economy – in the current environment I suggest that people become apprentices to sustainable farmers, or at least relocate to rural areas and build local connections and work with farmers to do value added food processing.  The handwriting on the wall is very clear to me why Jim Rogers relocated to Singapore last year.  There is much to be said for a strong government to direct action in a crisis.  I also agree with his comments that the Dow could fall below 4000.

John Train – I agree with the idea of "buying in Deepest Gloom if you can spot it".

Meredith Whitney – She has done a great job of analyzing this financial mess and calling things as they are.  Her idea of a wholesale restructuring of the banking system makes sense.  I don’t agree with the concept of shifting the losses to the US taxpayer.  The comment about 2009 being the economy impacting the market makes sense.

Wilbur Ross – I agree that the economy can’t stabilize until the housing market stabilizes – little seems to have been done so far at the grassroots level to achieve this.  I don’t agree with shifting the losses to the US taxpayer.  I agree with addressing unemployment – but at a grassroots level.  Everything so far done by the US government has been at the macro level – shifting wealth and income to the grassroots level is the way to reestablish balance in the economy.  I base this on the following link:  http://en.wikipedia.org/wiki/Great_Depression in the section Inequality of Wealth and Income which I’ve found this evening and found tremendously insightful.

My impressions of these individuals-

Nouriel Roubini –Give the man props, he may be a traditional economist, but anyone who predicted this coming is not part of the good ole boys club. That’s the first indicator, not calling them a doomsayer, like giving him the name Dr. Doom, but recognizing they are out of the normal grain fed economists that rely on pure data that is grossly manipulated. What I don’t like is this-

Krogoth-What? Some of the best and once in a lifetime deals are coming. As long as we don’t have a major crash, or some unexpected major event like a meteor hitting Wall Street, the opportunities right now if you know what you are doing are fantastic. This is a once in 100 year opportunity, and people can at least get back some of the losses if they have the capital to do so, and a huge set of balls.


Bill Gross –
Nothing but a tool that thinks TARP and other bailouts are a necessary thing. More than likely has safe investments or is just part of the so rich I don’t care club. Not worth much typing.

Krogoth- It’s good that he is watching the P/E ratio, but really, can any indicator be trusted right now? I don’t think we can turn to pure numbers on this because fundamentals are not driving valuations. With companies facing this kind of credit crunch, as well as layoff’s or complete closings but these are indicators that are part of the old school method. No need to over complicate things because it’s simple. The companies that will make it are the ones that have the capital to go through 18 months of hell and not go out of business. It’s that simple.

Sheila Bair –
Krogoth-If the devil was a woman. OK, sweetheart deals to JPMChase is not my idea of a good or solid leader. She’s a crook, and has nothing to offer from an educational, rational or fair base of ideas. As long as banks in need of rescue get chewed up by the triple threat of her, Bernanke and Paulson and thrown to the wolves, or other banks get preferential treatment, she is nothing more then a female mafia boss.

Krogoth- We? What is we? Ms. Bair will be quite comfortable with whatever money she has hidden away being thrifty with her savings just like Mom and Grandma, with all these underhanded and unfair deals. I doubt if she has the right to even use the word "we" considering she will come through this without a scratch, as will her family. Will yours?


Jim Rogers –
This is good and also wise-
Rogers – What I’ve been buying recently is agricultural commodities. I’ve also been buying more Chinese stocks. And I’m buying stocks in Taiwan for the first time in my life. It looks as if there’s finally going to be peace in Taiwan after 60 years, and Taiwanese companies are going to benefit from the long-term growth of China.

This is true-
Rogers – But if and when we come out of this, commodities are going to lead the way, just as they did in the 1970s when everything was a disaster and commodities went through the roof.

This is not-
Rogers – In my view, U.S. stocks are still not attractive

Krogoth-Still not attractive as a whole, but some opportunities are coming into the radar that are unbelievable. I can’t see them going much lower actually. Makes a good argument of the old buy when blood in the streets argument, but when to get in? If the DOW hits 4000 and below? If that happens we are dangerously close to a market crash and may not be the best time to put your money into the market.

John Train- Same argument of blood in the streets- Same observation of the cash cow companies
Train- They often have huge cash hoards, e.g., Cisco, Apple, Microsoft, and Berkshire Hathaway, whose war chests exceed $20 billion. Or Hewlett-Packard, Google, Intel, or IBM, all in the $10 billion league

Krogoth- OK, well here are some examples of companies that will make it through 18 months of hell


Meredith Whitney –What the federal government has done so far- with TARP, bailing out Citigroup, etc. – has stemmed the bleeding, but what it hasn’t done is fundamentally alter the landscape.

Krogoth- This is true, but it seems to be shes partially agreeing with TARP, which is a BS bailout and so far is going unchecked and unsupervised, unless you count Paulson as a supervisor. I call him a glorified bag man. So what does she expect? If it takes 350 BILLION dollars to stop the bleeding, how much will all the other treatment cost when the hospital bill arrives? How much money will it take to alter the landscape of political lies and shady bank business? How much taxpayer suffering will this cause? When will somebody report on the Paulson dictatorship going unchecked and unsupervised and not why TARP will or wont work? How can anything work if it can’t be checked by outside groups. This is the job of Congress, and nobody seems to be caring about the core of this at all.

Krogoth- I’m not. Treasury Secretary, Tim Geithner from the Federal Reserve Bank of NY. Geithner’s maternal grandfather, Charles F. Moore, was an adviser to President Dwight D. Eisenhower and served as a vice president of Ford Motor Company.
Krogoth- Wow, maybe FORD will be a company to invest in after all of Tim’s family involvement.
Geithner spent most of his childhood living outside the United States, including present-day Zimbabwe
Krogoth- Oh great, they are setting a good example
After completing his studies, Geithner worked for Kissinger and Associates in Washington, D.C.,
Krogoth- Is Henry Kissenger not a Sith Lord?
In March 2008, he arranged the rescue and sale of Bear Stearns[1][15] and later, in the same year, he is believed to have played a pivotal role in both the decision to bail out AIG as well as the government decision not to save Lehman Brothers from bankruptcy.
Krogoth- His family or his cousins must have AIG stock, and not Lehman Bros.

Kogoth- OK overall this is a bad choice, but an expected one. A Federal Reserve monkey going into the big game. Business as usual, and my first big letdown from Obama. Sadly, I think America will realize 2009 will be nothing but a bunch of Obama letdowns.