See, the conclusion that markets are manipulated is not a one-mode conclusion… rather it is a conclusion borne of connecting many, many dots…

All the dots may indicate something, or they may not.  If you go into the "search for truth" already sure you are right, then everything that might or might not indicate a conspiracy gets turned into a smoking gun.  That's the Texas Sharpshooter in action.

Me, I have my articles of faith too.  I believe – the same way Mish does – that mysterious forces cannot manipulate the trend in a marketplace until that trend is ready to change on its own.  Central Planners cannot move the rocks uphill – they can only push them downhill even faster than they ordinarily would have gone.

Our Central Planners were powerless to stop the move of silver from 20 to 50 during 2010-2011, and presumably they had some very strong motivation to do so especially when the rest of the commodity index was rolling higher, when QE was seen as leading to hyperinflation, and so on.  Logic would seem to suggest that the central planners/manipulators should be much less concerned about silver today, especially when all the rest of the commodity index has dropped 20-60%.  If I were a mostly-all-powerful manipulator, I'd spend my energy on manipulating other stuff that's showing itself to be an actual threat rather than putting all my effort at keeping something down that isn't even a concern, and is arguably below production cost at this moment.

But I realize this conflicts with your article of faith: if gold and silver drop, its all about manipulation.  And if it doesn't bounce back immediately, that's manipulation too.  Ultimately I get the sense that if silver isn't at three or four times your buy-in level and rising steadily every day, ispo facto the manipulators are keeping you from cashing in on your "sure fire money printing bet that by all rights should have paid off big time by now."  And each dip along the way – that's manipulation too!!

How many goldbugs cry "manipulators" every time gold or silver drops, in order to have a target for their anger at the failure of their sure-thing trade to pay off like a slot machine?  Maybe that's not you – but I bet, deep down, that is a very serious underlying core feeling in the goldbug community.  They feel cheated of their legitimate winnings, and they're angry about it.  Certainly its emotionally easier to cry "all powerful manipulators" rather than to understand that markets move in cycles, and sometimes the cycle goes down, even for sure-thing trades like gold & silver.

Again, that's just my article of faith talking.  I believe there is manipulation, just not successful trend manipulation, and I don't invoke manipulators every time I look at the red in my position in order to make myself feel ok about my core trades.

FWIW I do like your charts about investment demand growing as a percentage of total silver demand, those are cool.  It looks like a decent mega trend, and it will certainly help my little silver bars become worth more as time passes.  It won't do away with market cyclicality – nothing will – but it should provide some good support for a rising baseline around which the cycles will inevitably occur.

Silver won't stay below production cost forever.  It can't, unless we have a major deflationary accident.  And then the cycle will turn, and we'll be off to the races again.  And "the manipulators" will be completely powerless to stop it, in exactly the same way they were powerless to stop the 2010-2011 rally.

And that's my article of faith.

Silver is going to make us money/wealth in the short, mid, and long-term. At least that's what the data says.

If anybody wants a couple more charts on this pattern. I shared this on youtube

I thought I would share this one as well since this is now a front page discussion (thank you). The .5, 1, 2 represent how many $10 blocks the pattern is trading in. These numbers just happen to be doubling every series. This would also support the $80 price target assuming the next series spans 4 blocks…

Nice job, WLT.  Technical analysis of PMs is not the kind of thing I would normally "get", but your charts. analysis and presentation made your points very cleanly and clearly.  Thanks for sharing what you see/understand (with some of us wouldn't see/understand otherwise:)!

While I don't disagree with the final assessment, I find that there is a little bit of picking and choosing select data to make the case stronger instead of simply stating all of the facts.   The first point is that his data includes silver prices well into 2014, however one of the main arguing points is that input costs in the form of energy will continue to rise due to declining production.   This data / chart only includes production values up to 2012, which completely misses the "shale revolution", where the U.S. production has created an almost u-turn on the chart and we are now at 25 year high in domestic oil production.  Global oil production continues to increase, but production costs are the driver in crude price, not (at least for now) demand.

I happen to believe that the shale revolution will turn the other way and production declines could be precipitous, however we could have relatively steady state oil prices for awhile longer.   Additionally, another pullback in the economy would reduce industrial demand for silver in the short run, and you are hard pressed to find anyone besides Janet Yellen who really thinks the economy is doing better.

Again, I don't disagree with the long term investment thesis for silver, I just pose a short term viewpoint, and point out a big hole in one of the major points of the argument.

Disclaimer:  I did just buy some silver two weeks ago, and will buy more on a dip scenario if it unfolds as I explained above.

I am currently hunkered down in a bunker beneath TBP Central as predator drones circle overhead waiting for me to show myself. The website has been under a relentless denial of service attack since Thursday afternoon. The site is being inundated with over 3 million hits per day that make it impossible for anyone, including myself, from getting onto the site.

I've been trying in vain to log on there for about a week. My thinking was that Quinn's site got nuked because of his battle with Google. Hope he gets this squared away.

Oil prices: The shale boom did not bring back cheap oil. The massive increase (over-production even) in oil production in the US has been connected to a failure to slow down the extraction of a resource that comes out far faster than companies would like, and ultimately results in annual decline rates of 20% or higher from each of their wells. I don't think you could have a more terrible resource to depend on price security heading long-term.

Also, most companies in the Shale business are taking losses. 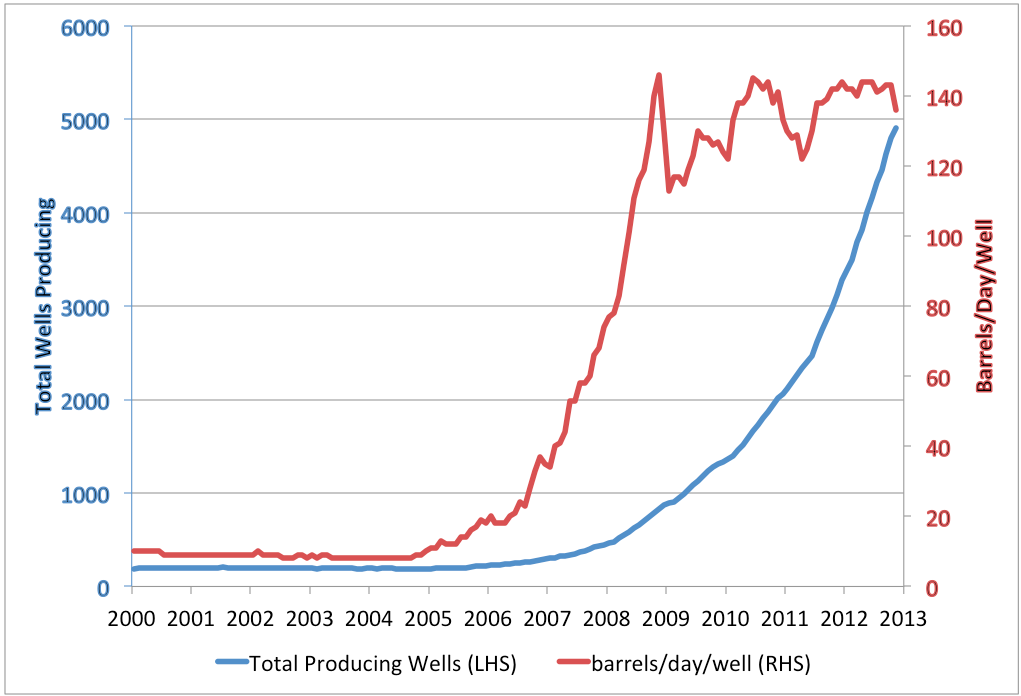 Apparently Cheaspeake Oil creates shareholder value by re-selling land lease contracts because selling their resources alone isn't profitable. These resource companies are losing money in the BEST years, and we are moving very rapidly towards the "no so good years" and rapidly after to the "no good years."

The other factor is that, about a 3rd of the global demand for the silver is as money as Jim pointed out. Demand for silver as money is skyrocketing and is showing very little sign of weakness. If silver demand drops 10% in industry, I would not at all be surprised if monetary demand rose 15%.

You are truly multi-talented.

Apparently Cheaspeake Oil creates shareholder value by re-selling land lease contracts because selling their resources alone isn't profitable. These resource companies are losing money in the BEST years, and we are moving very rapidly towards the "no so good years" and rapidly after to the "no good years."

This is really insightful, and right on.  Shale oil runs out fast.  I know of no better illustration of this than a simple chart of the price action on one of the young shale oil trusts set up by Sandridge oil.  This trust started out at $30 per share… and it looked like a nice utility-like yield instrument for retirees… that's before the yield from oil started dropping on a quarter-by-quarter basis faster than anyone expected.  At this point, even with a (current) 22% yield, it's unclear whether you will ever get your principle back before these shale oil wells run down to zero; 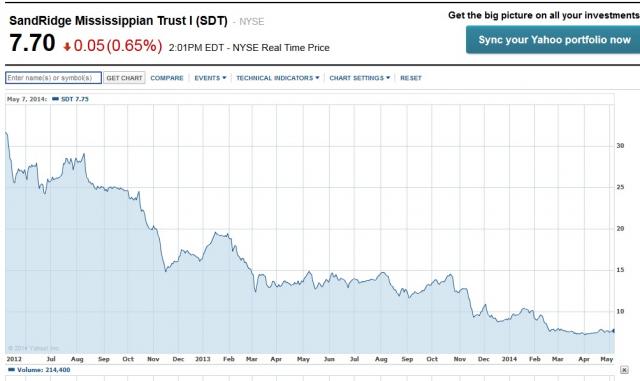