If anyone is interested in private vault storage in Colorado, I can recommend Colorado Vault & Safe Deposit Box Co. http://cvsafebox.com

I think the biggest thing for me is that all the industrial metals are trending in similar ways. The economy is crap and the Fed and friends want to promote growth. A GREAT way to do that would to make the commodities cheaper that are used to make the goods that create revenue. Silver would be on that list.

Yeah, to my mind, either all metals are manipulated, or – pretty much – none of them are, since they all tend to track together.  That's what the evidence suggests, at least over the longer term.  You believe they're all manipulated, and I believe, none of them are – at least not successfully anyway.  Either thesis is backed up by the price evidence.

Here is why – and this is for Jim's benefit, not yours, since you already understand the correlations:

However, the specific ratio of silver and the other industrial metals does change over time.  Sometimes silver is overpriced relative to the industrial metals, and sometimes it is underpriced.  We can see this visually by looking at the chart of the silver/copper ratio.

So if our thesis (Jim's thesis) is that silver has been unfairly (and successfully) singled out for beatings by the Central Planners because its a monetary metal, the silver/copper ratio should be lower than normal.  Is this the case? 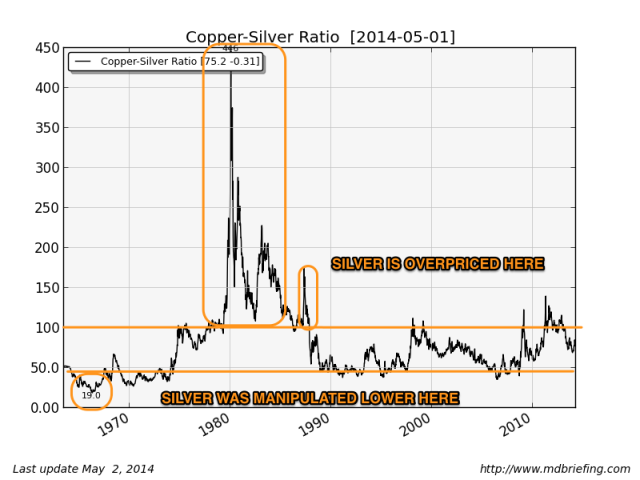 Note: according to my historical data, the copper/silver ratio ranged between 40-100 all the way back to 1900.  Given the relative stability of this ratio over the long haul, I'm guessing this is a "physical mining constant" driven by byproducts and ratios of copper to silver in the earth.

Let us pretend that some alien species came to Earth and lusted after, oh I dunno, maybe dandelion seeds. So then we went to their planet and gold was everywhere. And we went crazy for the metal.

Who would be the nutters? Them or us?

The point is if our society is going to go through the turmoil that I think is coming, I am not at all sure that Gold or silver will be sought after. Even silver is going to lose it's throne to carbon as the preferred conductor for photocells, both because it can do the job and because if the efficiency of photocells  means we can afford to lose a little energy.

But still, I use the fantasy that silver will skyrocket anyday now to fool myself into saving. It works a treat.

Dave, your chart is pretty cool I think… because it really makes my case.  How?  What happened starting in 1979 was that our new, unbacked fiat money system was getting it's first test of confidence post the 1971 decision to take any remaining semblance of the (Gold) governor off of the system.  There was an inflation crisis happening, and Silver (and Gold) expressed their character as money in the price action.  The incremental investment demand for Silver drove this price increase… and only through Volcker's bold move to make the US fiat money very desirable via an extraordinarily high yield did the investment demand for Silver abate.

Today, there are numerous signs again that investment demand is climbing.  Since 2011, the forces behind our money system have been working hard to keep price from telling this story of investment demand.  What are the signs? 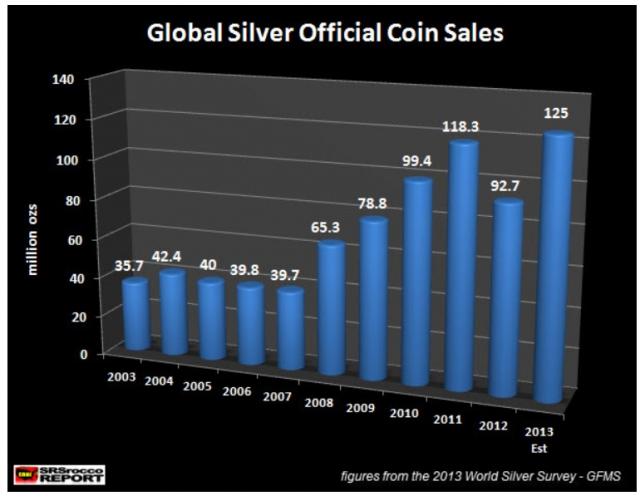 and then there's this; 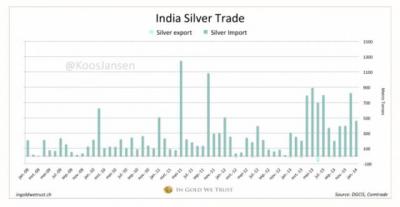 And then there's this point about how different Silver is from other commodities, from Ted Butler;

The best thing about silver’s extreme undervaluation is that the reason for it is as clear as is the undervaluation itself; not in terms of legitimacy, but certainly in terms of clarity. As I have reported recently and for years, COMEX silver has the largest concentrated short position of any traded commodity. Eight traders, led by JPMorgan, are responsible for silver being the most undervalued asset in the world. The world’s largest concentrated short position should logically result in the world’s most undervalued asset. I think this is good news because it would be impossible for me to show conclusively that silver was the cheapest investment asset of all without providing a definitive explanation for the unprecedented undervaluation.

Ted's piece takes your approach Dave, of looking at Silver through the eyes of other commodities.. and he (like me) comes to a different conclusion.  TPTB don't want you to view Silver as a competing money.. only as an industrial metal…. and that is why Silver is suppressed.

That's an excellent summary of our two viewpoints.

I believe that silver has not been successfully suppressed because it has been tracking alongside the rest of the industrial metals (except for one big move outside the range in 1980) for the past 115 years.

You believe that silver has been successfully suppressed because – it has been tracking alongside the rest of the industrial metals for the past 115 years, and you claim that as a result it is way undervalued.  "TPTB don't want you to view Silver as competing money."

Ok, so way back when – before 1964 – silver WAS money.  What was its trading range vs copper then? 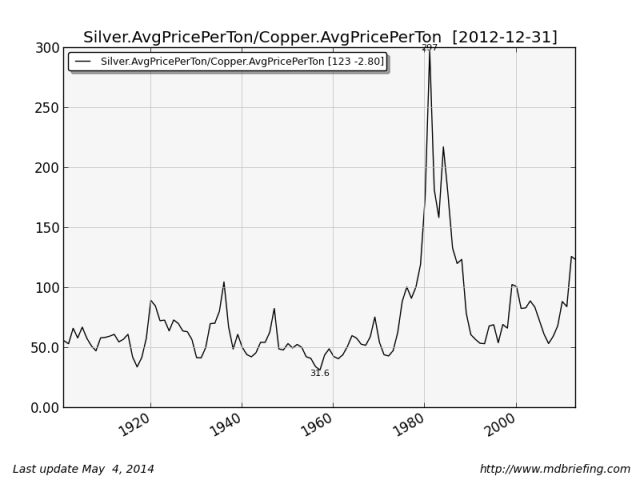 Dave,  Yes, Silver was money up until 1964.  It stopped being money at that time because the long, slow burn debasement of the dollar that had been happening since the FED came into being in 1912 meant that the metal in the coin was about to surpass the face value of the coin.  I found one reference to Silver being $1.29/ounce in 1964, which would have put the Silver content of a quarter, in 1964, at 23 cents.  As long as the face value of the coin exceeds it's metal value, you are better off holding the coin (in other words, holding money as money) vs. holding the metal as money.  Based on this .. I discount the value of your chart to this debate prior to 1964, because there would have been no reason to hold the metal as money.  Silver was in dimes, quarters, etc… Copper was in pennies.  Apples-to-apples.

From 1964 – 1971, Gold was still money in terms of settlement of trade imbalances between countries… so the governor was still on the system.  It's only after 1971 that things get unhinged and we enter an era where TPTB are working to convince us that the dollar is the money we want – not metals.  Now we are in the modern era where you have to decide for yourself what is money.  As per the chart I posted above, many more folks are choosing to save their money in the form of state minted Silver coins than ever before.  Gold and Silver are regaining their moneyness froTm the POV of investment demand.. just not so much from a (relative) dollar price POV.  The price is being suppressed in the paper futures markets by entities that don't want Silver to be viewed as a competing form of money – I don't think you commented as to why Silver having the largest amount of short interest among commodities is not a sign that it is being manipulated?   I just think it's possible to be a trader and anticipate the price action through the lens of manipulation without carrying the Cartel's water for them.

This guy is one example;

So first of all, I'm fine with saying that someone could well be trying to manipulate the price of silver with all those short positions.  I just claim that their attempts have not been successful enough to depress the price of silver past its "natural floor value."  In fact, if they are engaged in attempts at manipulation, they have only succeeded in driving silver down to the middle of that historical value range at 75:1.  Ho hum, wake me up when you get down to 40:1, then we can talk.

This is contrary to the position of many goldbugs, who suggest silver is super-duper-uber cheap.

I will say this though.  I believe that emotional buying public will decide one day that they need to own silver (or cabbage patch kids, or pet rocks, etc) and that will drive the price far, far out of its normal range relative to copper, and that the public is extremely unlikely to "panic into" copper with the same enthusiasm because of weight, history, rarity, and so on.  That's what happened in 1981.

That's why I hold silver.  I expect a superspike.  (2011 was not such a superspike – that's clearly visible on the copper/silver ratio chart).  But when the buying panic occurs, I'm not going to imagine that "silver has finally reached its natural level" which of course many of the silverbugs will all be saying – at that point, I'm going to sell and trade it for some other, real stuff that I want to have.  Silver isn't a love affair, its a long term trade, that's all.

At the end of the day, all I'm doing here is to try and construct a non-printable "something real" yardstick as a way to understand where we are in the metals: undervalued, overvalued, or fairly valued.  As a result of this yardstick quest, I don't see myself carrying water for any cartel other than my own personal "buy low sell high" organization, a place I thoroughly enjoy working for.

How would you interpret these charts? I presented my opinion already, which I am unable to support with any more data, so I'm not going to argue it anymore. I just don't know how you can see these data, and still believe that there has been a grand manipulation conspiracy over the years to suppress the public's opinion on silver as monetary asset. I wish I had data past 2004, but I don't.

I just don't see that idea fitting with what we see here, but if somebody can extract a different manipulation opinion out of these charts I would be interested to hear it. Maybe Dave is right that real long-term trend manipulation isn't anything but natural movements and only short-term swings can be recognized as manipulation.

I do think it would be a crazy coincidence that metals have tanked when the Fed has been trying everything possible to promote growth in the economy. That would be too weird.

I think what happened is as follows:

Through 2008: hot money ran into commodities, bid them up to crazy values after an 8 year bull market and a whole lot of money printing (via private borrowing) around the whole world.

2010-2011: rebound from deleveraging & enthusiasm for QE/hyperinflation/reflation story bid commodities up again to semi-crazy values; PM especially benefitted from this.

2012-2013: the air slowly came out of the 2010-2011 rebound – hyperinflation didn't happen and in fact deflation in the eurozone slowly became apparent – and commodities overall drifted lower to where they are now.

Its one of those systems that, when hit with repeated shocks in both directions, runs too far in each direction then slowly tries to return to an equilibrium price again.

Dave, I think your opinion is well established and I am very appreciative to hear it. Thanks for sharing.

While I was admiring my charts and comparing price movements to what you were saying, I actually saw this interesting 2 year trend shift in silver price.

has anybody extrapolated this before? Very interesting.

Time for bed, but I think a deeper look into this over the next day or two may be in order for me.