CORRECTIONS – Most of these graphs are wrong.

Most of us have seen Alex Berenson’s recent post?

Vaccinated English adults under 60 are dying at twice the rate of unvaccinated people the same age
https://alexberenson.substack.com/p/vaccinated-english-adults-under-60

Not too big a surprise, it’s been Fact Checked™.

I don’t think the Fact Check™ is entirely wrong, insofar as the Simpson’s paradox may apply to a 10-59 age group. That doesn’t mean the assessment is false, that means the data needs to be age stratified in smaller bands in order to substantiate or refute Berenson’s assertions.

So I crunched the data using the youngest ten-year age band, 60-69. Here it is… It’s much worse that I’d expected, because I was expecting that this age group would have more benefit than risk from the vax. Seems like that was an overly optimistic assessment.

Hypothesis: People who reacted poorly to the first dose may have not made it to the 2nd dose.

Where are the Fact Checkers™, now???

In this age group, in this period, all-cause mortality: 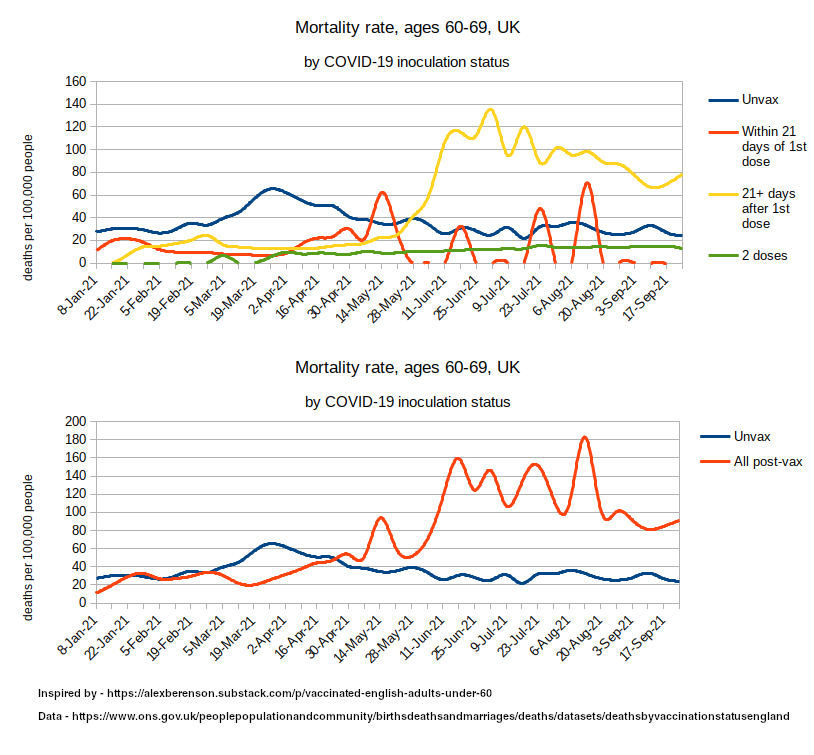 nb, I tried to get this kind of all-cause mortality data from NZ Ministry of Health, here’s the NZ data –

Thank you for your email request. The Ministry of Health is unable to provide the specific breakdown of COVID-19 related information that you have sought under section 18(g) of the Official Information Act 1982 as the Ministry does not hold the information in this way and is not required to generate it.

If you don’t look for it, you probably won’t find it.

Nice work Atom.. my age bracket.  I noticed the bump in all-cause unvaxxed in the April timeframe and figured it was due to a generalized Covid-19 death wave.. looking at Worldometer, that does appear to be the case in the UK.  That wave falls off by May/June though, so the all cause vaxed rise has nothing to with the virus itself.

My gut is that, were you to do some area-under-the-curve calculations, rather than just comparing average or instantaneous rates, that your data would tell us that the shots (or some other magical, coincidental factor) are > 4X as deadly as Covid-19.  The exercise I am imagining is area under the blue curve for the three or so months where it diverges upward from the all cause mortality background (around 30 in this data) vs a period of the same length in the post jab elevation.

edit for a question:  What do you think is behind the odd periodicity of the little death waves off the zero line for the in-between (within 21 days) vax group in the first chart?

What do you think is behind the odd periodicity of the little death waves off the zero line for the in-between (within 21 days) vax group in the first chart?

I can only guess… Different brands? Bad batches? Or, in the realm of conspiracy theory, swapping out placebo shots for real shots? Note on the first graph, that the first bump in the orange line directly precedes the big bump in the yellow line; this hints that something changed at that time, started killing people exposed to the first shot within 21 days, then started killing people exposed to the first shot after 21 days; for “some reason”, those people did not get their second shot.

Following that line of thinking, since the (green) 2-doses line stays relatively flat, that’s pushing me to think that people who don’t have any adverse reactions to the first shot may derive benefit from the second shot, but this raises concerns that among people who do experience adverse reactions from the first shot, it’s too late; the damage is done. Catch-22. Trial by fire. If she floats, she’s a witch.

Something else that jumps out, is that these graphs trash the “safe and effective after two doses” story. Even if that’s true (green line), it seems to be very unsafe for people who, for whatever reasons, don’t get the second dose. Again, I’m leaning towards adverse reactions to the first shot being a leading reason why people in this age group don’t get the second shot, which brings us back to Catch-22; trial by fire. if she floats, she’s a witch.

Based on this data, in this age group, in the UK, taking this shot is Russian Roulette, with >3 bullets. For other age groups, in other jurisdictions, WE NEED TO SEE THE DATA.

On Berenson and Simpson’s paradox:

And on the fact checking of it:

The above graph is screwed up. This is what happens when I put together a graph, and post it, after bedtime.

The 3 components of the “inoculation exposure” group need to be combined with an AVERAGE function, not a SUM function, since they represent rates per 100,000 people. 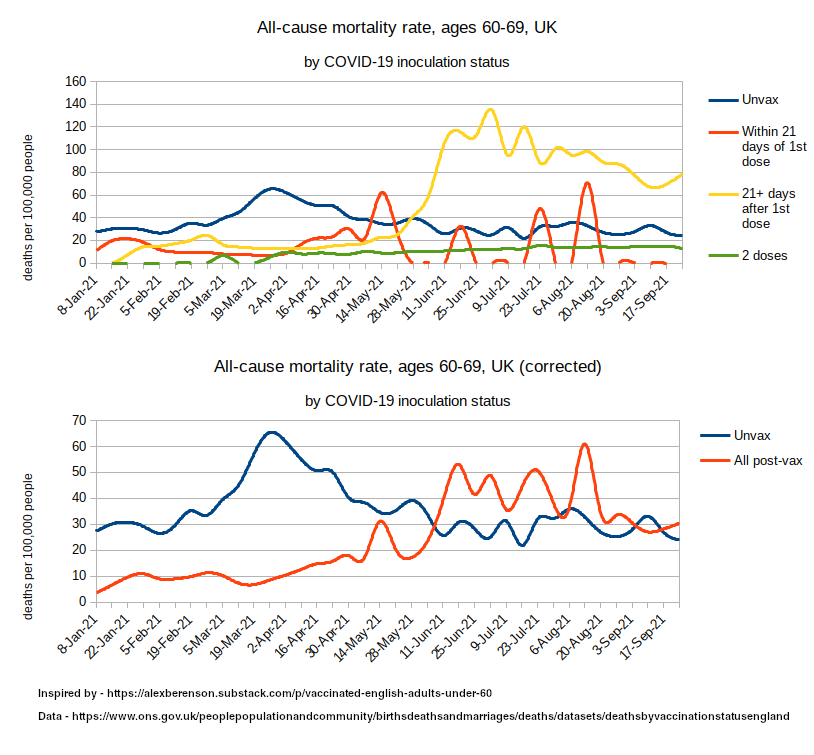 Notwithstanding the correction, as noted above, they may not be lying when they say “effective after two doses”… But separating that from people who only received one dose, possibly because of an adverse effect following their single dose, it only looks worse for people who got one dose. Again, this leads to a trial by fire.

And yes, the before and after 21 days “inoculation exposure” groups were combined in this graph with AVERAGE, not SUM.

If anyone else wants to double-check… I’m seeing a trend over time of negative efficacy of “inoculation exposure”, even in the 60-69, 70-79, and 80+ age groups where I would’ve thought that benefits of inoculation would outweigh risks.

We really need to see raw data in ten year bands down to 30 or 40 years old, and 5 year bands below that.

I’ll be surprised if we don’t see spikes in mortality rates when boosters roll out, and get reflected in the data.

Is that what you did?

I don’t think so.   the green 2 dose group should be much larger, especially after most of the group was vaxxed.  So it should have the most influence on the average.  You average is not close to that value, so I guess you did a simple unweighted average.