Its message is simple: there's a preponderance of data that shows the world's major asset markets are dangerously overvalued. And when these asset bubbles start to burst, the 'save haven' markets that investment capital will try to flee to are ridiculously small. Investors who do not start moving their capital in advance of crisis will be forced to pay much higher prices for safety — or may find they can't get into these haven assets at any price:

The morning after the Brexit vote is provided us with ample validation of the video's thesis.

The US dollar surged:

Gold put in a $100/oz reversal (which has since moderated a bit):

And look at the capital fleeing derivatives like sovereign credit default swaps. Losses of over 30% in a matter of hours. Yikes! 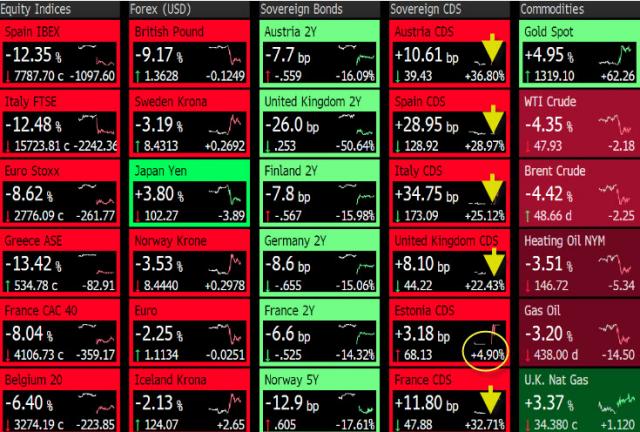 Over the years of writing about the risks in markets so distorted as the ones live with today, many Peak Prosperity readers have often asked me how my personal portfolio is positioned. Am I loaded up on save haven assets, and if so, which ones? Do I have long positions in stocks and bonds? What sort of private investments do I own? What am I focused on most going forward?

In Part 2: How My Personal Portfolio Is Positioned Right Now, I've finally decided to openly answer that question. I realize that many people are wrestling with the difficult challenge of identifying and assessing opportunities for safety as well as for prudent return in a market where price signals are bastardized and market risks obfuscated. Hopefully by sharing my own positioning, these folks may find a few constructive ideas worth discussing with their own financial advisers.