Eleven months ago, in February 2008, I led a conference at Rowe (MA) along with Becca Martenson and Alejandro Levins. At that time, the current financial crisis was not even on the radar screen for most journalists and investment houses.

We made these financial recommendations:

This is a basic set of recommendations that reflected my views that severe financial turmoil was on the horizon due to the effects of a bursting credit bubble. Given where we were in Feb 2008 and how things turned out, I am happy to say that we can chalk up a ‘win’ for common sense and good analysis.

Here’s how the world stock market indexes fared in 2008: 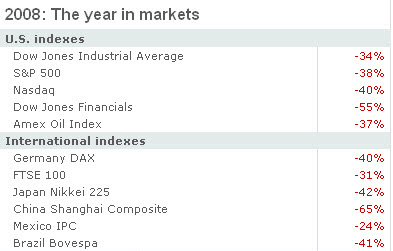 I believed this because I was collecting too much information about how deep the damage was in some very large real estate markets, and it seemed that the pain from that wealth destruction had not yet been reflected in any of the earnings estimates that Wall Street was still peddling.

Further, I was concerned about the extent to which our past economic growth had been a mirage constructed out of new debt rather than new production. Debt growth in 2006, 2007, and 2008 was running as much as 6 times faster than new economic growth.

When the debt growth merry-go-round stops, it tends to fling the riders off rather unceremoniously. This dynamic has been observed all across the globe and in the US numerous times. A small bit of history can really go a long way, and this was one of those times.

Next, as we look at my favorite safe-harbor investment, gold (the green arrow), we see that it was one of the very few bright spots in 2008 along with, surprisingly, the dollar.

Of great interest is the massive strength in the Yen (red arrow) which is now something that has me quite concerned. The reasons are that 18% is simply a ludicrous advance, considering the staggering amounts of Yen/$ involved and the fact that such a violent move could well lead to a dramatic dislocation in the world’s second largest economy. Such things are not to be dismissed lightly.

“Given the speed and the length of the contraction, this recession could be the most severe in the postwar era,” Morita said. “We expect negative growth will continue for a fifth straight quarter to the April-June period of 2009.”

For an export-dependent country, this is a very troubling development (to say the least), and I will be surprised, very surprised, if Japan does not renew their efforts to create a weak Yen to bolster their export manufacturers.

But there’s a larger story contained in all currency moves of 2008. The conclusion I draw is that the floating exchange-rate system, kicked off in earnest in 1971 (August 15th to be precise), is now proven to be a broken, unworkable system and that these violent currency moves are reflecting that fact more than anything else.

This is sure to be a big theme for 2009, and I will reiterate my call to be cautious in the stock markets and to insulate yourself from unwarranted and violent currency movements by owning gold.