Here’s a selection of recent headlines about
world food shortages, prices spikes, and hoarding that I’ve been
gathering for a couple of months.

I want you to think very carefully about how rapidly this food
situation began and morphed into a situation where nations began
hoarding food. I want you to consider this because I have the same
concern about oil. That is, once a slight shortage is openly felt in
the marketplace, the time between normal trading of goods and hoarding
can be a matter of days, if not hours.

Below, in the registered section, I will draw the connections and
make the case that all of this began on August 16th, 2007 with the
Fed’s move to cut the discount window interest rate. Meanwhile, Wall
Street parties on.

(April 4, 2008) SHANGHAI — A spike in the
price of rice and other food staples is triggering consumer panic,
including food riots in Yemen and Morocco, and hoarding in Hong Kong.

Governments around the world have taken radical measures in recent
weeks to control their countries’ supplies of rice. Egypt last week
said it would ban all rice exports for six months. Cambodia has stopped
all private-sector exports of rice, and India and Vietnam also have
imposed restrictions.

(April 9, 2008) “We have seen riots around the
world and there’s risk that these will spread because of rising prices
in countries where 50-60 percent of incomes go to food,” Jacques
Diouf, the director general of the United Nations Food and Agriculture
Organization, said in India today.

Record high grain prices have led to strikes in Argentina, riots in
Cameroon, Burkina Faso, Morocco and the Ivory Coast. The World Bank
says 33 countries from Mexico to Yemen may face social unrest because
of spiraling food and energy costs.


(March 1, 2008) Food prices, though, reflect more
than just increased demand. Rising prices for other commodities can
have a compounding effect on food. Higher energy prices, for example,
add to production and shipping costs.

That, in turn, can have grave implications for world health. For
example, the U.N. found that the cost of food imported by the world’s
neediest countries last year rose by 24 percent, to $107 billion,
raising questions about nutrition.

‘Panic’ wheat buying across the US

(February 26, 2008)Panic over commodity shortages
continues to emerge as the dominant factor in the global markets, with
both end user and speculative buyers of corn, soybean, cotton, rice and
a host of other commodities taking note of what’s happening in the
wheat pit.

The net result has been declining stocks at the same time that expanding global wealth has demanded more raw commodities.

The net result on Monday was new all-time record high prices for corn, soybeans and wheat on the same day.

Sentiment in the marketplace is changing from, ‘buying
just-in-time’ to one of, ‘buy what you need at any price’ and then to
‘buy even more to restock the shelves’.

In other words, there’s evidence to suggest that we’re beginning to enter the hoarding phase of the inflationary cycle.


Wheat prices could defy a recession

Declining water tables and unpredictable weather in major
production areas have hit crops, and much arable land has been diverted
to producing biofuels. Meanwhile, consumers in emerging markets like
China are eating more meat as they become wealthier, driving demand for
animal feed.

These factors are not likely to go away soon, even as general economic conditions worsen.

"It is mostly driven by world population growth, which is about 75
million people per year, and also by the more protein-rich nutrition
trend in Asia," said Jochen Hitzfeld, a commodities strategist at
Unicredit in Munich. He predicts a 50 percent rise in wheat, with
prices to average $15 a bushel in 2009.

The trend, in fact, is not a new one. In seven of the past eight
years, demand for wheat has been greater than supply, according to
Unicredit, though so far that demand has been met by drawing down
existing stockpiles.


The poor of the world are getting increasingly priced out of their
daily bread. Literally. For many, this is a true disaster, and the
wealthy nations are largely to blame.

Not because we are consuming any more than we used to, but because
our central banks were scared by what they thought might happen if the
big banks of the world were allowed to take their lumps for making
their ill-advised gambles on the housing market.

There are three dates I want you to remember as you view the charts
below. August 16th, the date of the first Fed rate cut (to the
‘discount window’), and January 22 & 30, two sets of cuts to the
Federal Funds rates of 75 and 50 basis points, respectively.

Now, let’s look at some charts. To help you out, I’ve circled those dates for you.

This first chart is of ALL commodities. That’s oil, grains, metals,
and fibers. The second chart is wheat, while the third is rice. As you
look at them, notice what happened after each set of rate cuts.

I see a very clear and immediate connection between the rate cuts and
the explosion in commodity prices. Of course, this should not have been
a surprise to anybody at the Federal Reserve, since hot commodity
prices and easy money have a long relationship with each other. 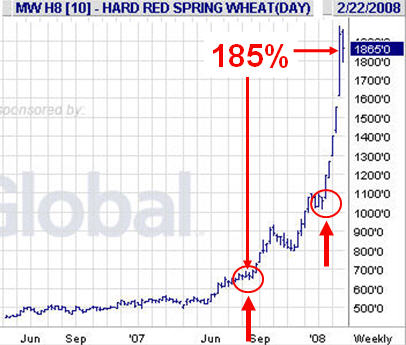 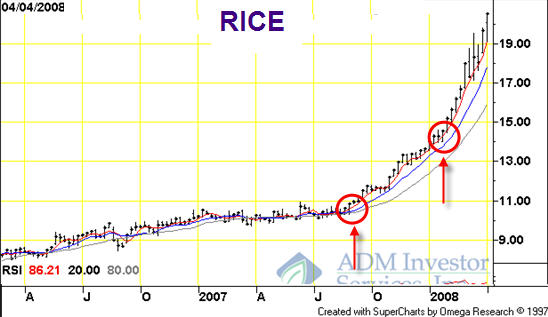