What follows is a snippet from the most recent Martenson Report (Housing and Wealth: Part II).

Just as important as a person’s desire to buy a home is their ability to gain access to mortgage funding.

The mortgage market is a gigantic beast with many moving parts, but it is pretty easy to understand from a high level.

The process works like this:  A homeowner secures a mortgage from a bank or mortgage company.  Then the mortgage is sold off to another company, with the cash generated by that sale now available to lend to other potential homeowners.  Ultimately the mortgage may pass through several sets of hands but ultimately it lands with a terminal holder.

In that chain, the mortgage might get sold off several times, or perhaps sliced and diced by Wall Street wizards, but all that matters is that some company (with cash) is there at the end to buy the mortgage to keep the whole chain moving along.

Lately, the “terminal buyers” in that chain have increasingly ended up being the federal government (through the GSEs) and the Federal Reserve.

And not just by a little bit, but by a lot.

Here are the numbers:

Taken together, and assuming that we live in a world where 10% is the average down payment, we get this table:

Now let’s look at how many Mortgage Backed Securities (MBS) and agency debt obligations were accumulated by the Federal Reserve on its balance sheet over the same period of 2009: 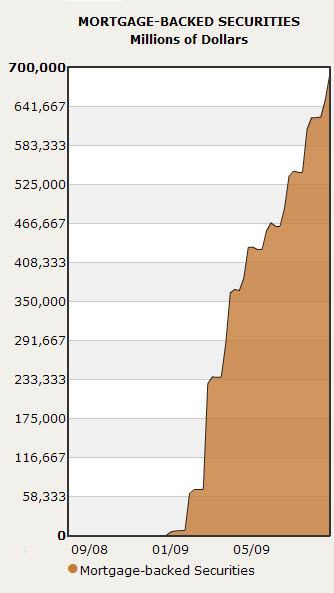 It turns out that in 2009 (again, through August), the Federal Reserve has bought $624 billion of MBS and a further $98 billion of Agency debt, for a total of $722 billion in money injection into the housing market through Fannie Mae, Freddie Mac, and the FHLB. 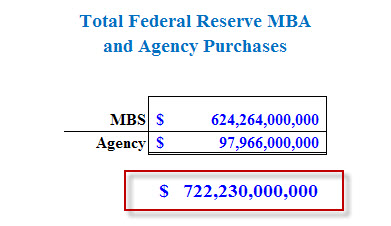 In other words, the Federal Reserve alone bought $722 billion of mortgages and agency debt when only $686 billion in new mortgages were issued.  So, through August, the Fed bought more than 100% of the entire supply of new (purchase) mortgages in 2009.

That’s not a free housing market; that’s a market bought, owned, and sustained by the Federal Reserve’s willingness to print up three quarters of a trillion dollars out of thin air.

While the individual mortgages issued in 2009 may or may not be the exact same ones purchased by the Federal Reserve, that’s immaterial.  All the mortgage issuers care about is that when they issue a mortgage, a purchaser with money exists somewhere down the line.  The chain needs a terminal buyer, and that buyer has become the Federal Reserve.

The impact of these purchases by the Federal Reserve is to both provide liquidity and to drive down the rate of interest for new mortgages.  By lowering both the long end of the Treasury curve (which the Fed does by actively buying Treasuries) and providing more than sufficient demand for MBS and agency paper, long-term interest rates come down.

Without the Fed’s activities, it is a rock-solid certainty that mortgage interest rates would be higher than they are, and possibly a LOT higher.

What all this means is that when (not if) the Federal Reserve begins to try and unwind itself from all of the magnificent interventions of the past year, it must contend with the fact that it is the housing market.

Where the Fed is hoping that it can gently release the soft chubby fingers of the housing market, which will then toddle off under its own power, it will discover that it is actually carrying a helpless newborn.