If you prefer to listen to the author read this article, Click Here.

We didn’t have a lot growing up, as my mom had to single-parent three kids. Most anything I wanted required disciplined frugality.

I bought my first fly rod from Orvis at the age of 13, which took the better part of a year to save up for. I hand-tied the first flies drifted from its lines from the hackles of roosters I raised expressly for that purpose.

In my later teens, I took a long cross-country climbing/working road trip where I lived on $5/week (1980s). Doing so was an art form involving dried beans and camping for free on federal lands, including the time I woke up to a large bull pawing and snorting a few yards from my tent.  I knew nothing about the behavior of bulls, and still don’t; but I knew that wasn’t a good sign and so I backed away using the tent as a shield and climbed a tree.

Sleeping on the ground, or on sofas doesn’t bother me. I am a remarkably un-picky eater. I’m just easy that way.

All of which is to say that being frugal and ‘making do’ with what’s on hand comes naturally to me.  Don’t get me wrong, I can enjoy spending money, and have indulged in some expensive hobbies in my life. But I can also zipper the wallet and not skip a beat.

I’m glad I can, because being frugal is an extremely valuable skill to employ as we get ready for a future of ‘less’.

Sometime, much sooner than we’ll be ready for, the systems upon which we rely will fail us.

The weather system is already becoming intolerably wonky. Heat in Europe, crop-ruining rains in the US farm belt, and unprecedented heat in the arctic are all telling us that something is terribly amiss.

In fact, at this moment on an 80-degree late June night, in New England, I’m typing next to an open window, no screen, the room lights on, and there are exactly zero insects flying about the room. Not a single one.  I’m old enough to remember the swarms of beetles, moths, mosquitos, and other bugs that such a night would have brought.  That they aren’t here tonight is extremely unsettling to me.

Anyone who can read or access the internet and has at least minimal curiosity can detect the signs of the deep stress all around us — in our environment, in our society, and in our economy.

It’s critical to realize that everything in the financial sphere — from the lofty prices of stocks and bonds to the fiscal solvency of nations — depends on the future economy being exponentially larger than it is currently.  But this expectation is flawed; you can’t extract ever-increasing exponential growth from a finite system.

A ‘credit recession’ almost destroyed the global economy last time (2008). Yet now there’s an even larger one primed and ready to burst.

But you’d never know that by watching the nightly news or reading the major media outlets. Because the more dangerously-lopsided things become, the more urgently the entire interlocking system of narrative control works to convince the masses that everything is fine.

But curious critical thinkers like you and I know that’s not true.

It is in the cultural and sociological data, which show that the epidemic of obesity continues to worsen, suicide rates are hitting record high levels, multiplying increasing feelings of isolation, and record levels of being miserable and unhappy around the globe.

It’s in the economic data, which shows the widest wealth and income gaps in history, 62% of millennials struggling from paycheck to paycheck, desperate central banks able only to conceive of ever-more stimulus (easing) efforts, massive and rapidly growing debt piles, the misery of households that do not have any emergency buffers to draw upon, and in the US alone, over $200 trillion of underfunded pension and Medicare promises that can’t ever be met.

Even if we could set all of the above aside (and we cannot), a looming net energy crisis tells us that the future will be terribly different from the past.  Most people are unaware — falsely lulled by the recent US shale ponzi — that oil production will indeed peak and then decline.  Or that total net energy output from fossil fuel is already falling steadily now that all the easy oil and gas are gone.

Our economic and population arrangements were made back when huge 100:1 net energy returns from fossil fuel were routine.  Comprehensive planning and mitigation strategies have to be made right away if we are to transition to the lower ~5:1 returns offered by shale oil and solar.

Forty to sixty years are required to effect a smooth energy transition.  Meanwhile it looks like oil output may well peak in the US around 2025 (a lot depends on easy credit and a high price for oil), has already peaked and gone down in 18 countries since 2005, and the world remains heavily dependent on the output from a small handful of ageing super-giant oil fields discovered and put into service more than 50 years ago.

In other words, we don’t have 40 to 60 years. We may only have ten. Yet no urgency can be detected in the official policies of the world’s major nations.

Industrially-farmed soils are going to be completely exhausted within 40-60 years, requiring ever larger fossil energy inputs to keep them transiently supplied with nutrients.

Add all that up and what do you have?  A very strong case for a very uncertain future.

My interpretation is these are the warning signs of a global culture that has grown past its natural carrying capacity and has yet to face that reality.

Which is why the sociological data tells me that people are very worried, even if they cannot exactly explain why.

Given all that, everybody wants to know: What should I do?

It turns out there’s one fairly robust response that any individual can employ that will help address the developing predicaments identified above: Extreme frugality.

Don’t have much money?  Then spend less.

Have money and want to protect it?  Also, spend less.

Want to protect the natural world?  Then consume less.

Want to be happier?  Then spend less and gain more free time.

Worried about money?  Then spend less, save more, and have more.

Want to resist corporations’ endless grabbing of your money?  Then be frugal.

Want to retire earlier?  Spend less and save more.

The answer to many of the challenges we face are directly addressed by spending less and consuming less.

Taking a cue from an old Saturday Night Live skit with Steve Martin, if you cannot afford it, don’t buy it!

There’s a lot to be said for frugality and especially extreme frugality.  By cutting out all unnecessary expenses, you align your concerns with your actions.  It helps you regain control over your financial life, especially if you are on (or over!) the edge.  Statistically speaking, that’s most people out there.

This won’t work for everybody; some people just don’t have the psychological make-up to be frugal. They’re too addicted to the instant gratification, “buy now, pay later” consumerism that corporate retailers and credit card companies do their best to hook us on.

But the concept of extreme frugality doesn’t frighten me. Or seem like deprivation. It just fits with who I am.  I’m perfectly happy scoring a used, dented item at a tag sale or on freecycle.org as long as it suits my needs.

And it shouldn’t frighten you. Frugality is one of the fastest paths towards relieving the ever-present money worries that plague most of us. It’s a freeing act.

The less money we require, the less control money has over us — how we spend our time and our level of happiness.

I’m not saying we all have to become ascetics and embrace a life of poverty. What I am saying is that frugality helps re-center our priorities away from the superficial and material and towards true substance — fulfilling relationships, meaningful activity, our connection to nature.

Henry David Thoreau captured the gestalt of extreme frugality well when he penned: 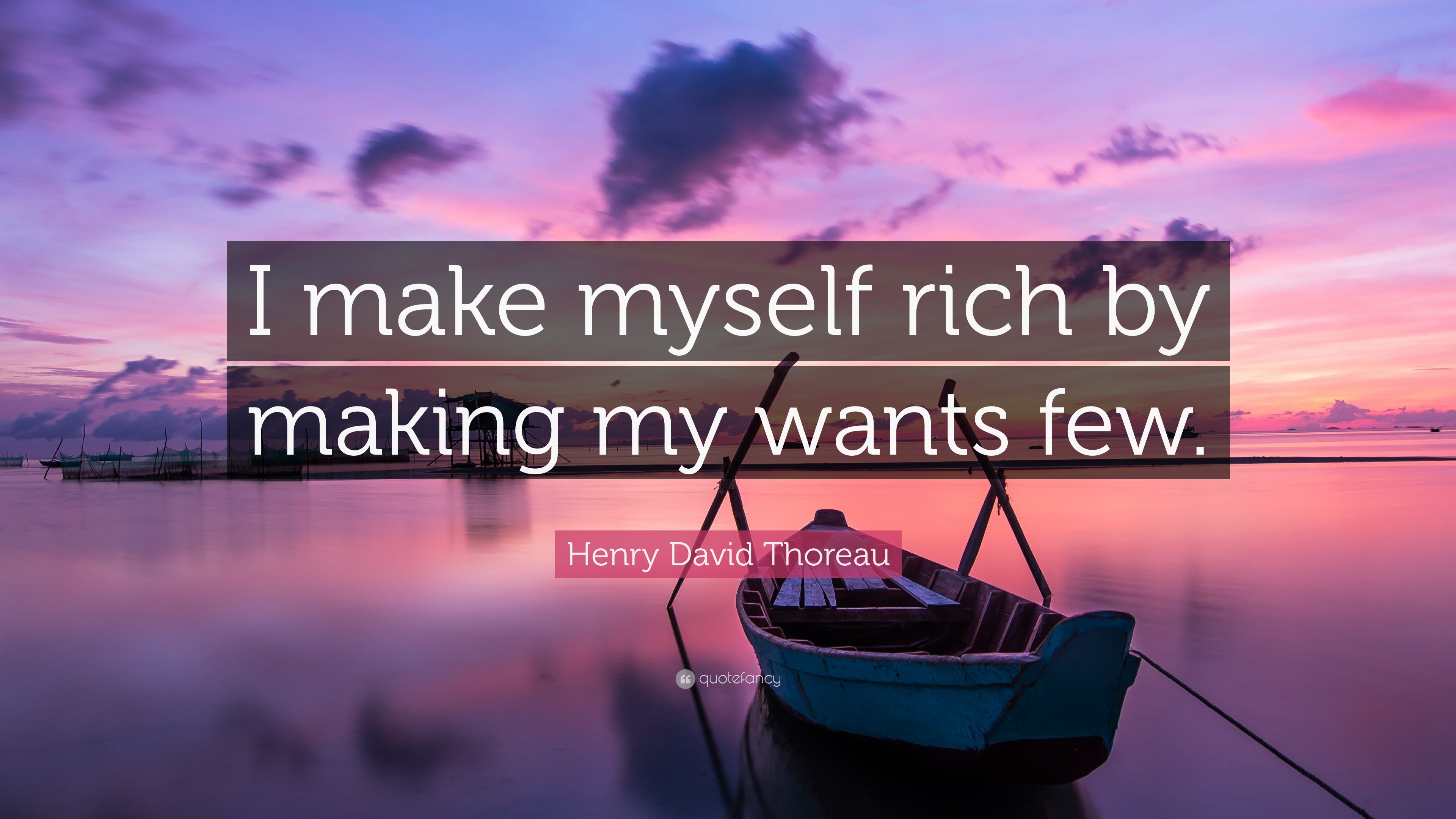 And as we as individuals reduce our level of consumerism, collectively, we reduce the demand our economy places on our strained ecosystems.

Given all that’s at stake, seems like we should be willing to give this a try.

Looks, the world is changing rapidly, and nobody knows how long the current good times will last.  And we’re well overdue for some kind of clearing event — the next recession, more record-breaking weather, a debt crisis, an implosion of the current credit cycle. The list of candidates is long.

At Peak Prosperity we’ve been staunch advocates of keeping your money safe, building multiple streams of income, and being as thoughtful as possible in your financial affairs.

Given the extreme state of the world, and given that tighter times almost certainly lie before us, it only makes sense to explore and adopt as many sensible frugality measures as we can, while we can still do them on our own terms.

One of the great killers of the last big bust in 2008 for many people was their too-slow dialing back of expenses.  They lost their jobs but kept up the same level of spending.  Kids stayed in private schools, eating out continued, and every subscription and cell phone plan remained in place.  When the unemployment rate kept rising, and the savings were finally gone, many families experienced the deep trauma of sudden, forcibly-imposed austerity — which was not fun. Not fun at all.

Learning the skills and habits of being frugal will be important for the future of “less” that’s coming.  Indeed, as wide-scale layoffs are starting to happen again, for many it’s already arriving.

Those looking to kick-start a more frugal lifestyle can begin with these straightforward steps:

But if you already have a good handle on these (as many Peak Prosperity readers do), there’s an exploding global community focused on extreme frugality to plug in to.

In Part 2: Live Frugally, Retire Comfortably we look at the major strategies recommended by the leading resources in this community for reducing your ‘money footprint’ and advancing the date when you achieve financial independence.

There are many levers to pull, on both the both the income and expenses sides of the ledger. Your task is to determine which are best for you.

But the key here is to do the math and then take informed action. Your future resilient self depends on it.