A few years back, I received an unexpected knock on the door late one Friday afternoon.

The polite stranger standing there simply said, “This is for you” as he handed me a piece of paper and then walked away. It took me a moment to realize what I was holding: a legal subpoena.

This was completely unexpected and caused, I’m not ashamed to admit, a considerable degree of freaking-out on my part until I learned why it happened.

As it turned out, someone in town whom I barely knew was involved in an ugly, protracted court dispute and his legal team hoped my testimony might help his case. (Why they didn’t simply call me first to assess if this was indeed true is a mystery to me…)

So a few weeks later I had the pleasure of spending an afternoon being deposed by lawyers regarding a matter I knew nothing about. I didn’t realize there were so many different ways I could be prodded to say “I have no idea” and “I don’t know”.

And I’d say the experience was a colossal waste of my time; but right at the end, I received a pearl of advice that made the ordeal worth it.

As I was leaving the law office, one of the lawyers involved in the deposition came up to me and apologized for my having been summoned. “This case is a complete cluster”, he said. “And it was all so avoidable.”

“Look,” he said. “You seem like a nice guy. The lesson to take from all this is to make sure you have sufficient protections in place, for your family and your business. A little foresight to line up the right kinds of insurance and legal structures can easily defend you from shitshows like my client is now going through because he didn’t prepare.”

I took that advice as a nudge from the universe to review my insurance and estate planning situation with my professional advisors. And I’m glad I did, as we made several changes/upgrades as a result.

I encourage everyone who hasn’t done the same in the past few years to use this article as a motivation to do so soon, too.

Umbrella Insurance: A No-Brainer For Most

Now, most everyone is familiar with the basic forms of insurance: homeowners/renters, auto, life and health. But I want to highlight a specific type of liability insurance that’s curiously under-owned.

Basically, its purpose is to pay for legal and damages costs should you get sued for any incident that you or a member of your family (including your pets) are involved in.

Most home and auto insurance policies are capped in terms of how much they’ll pay out in response to a liability claim. The average homeowners policy is written to cover damages of up to $300,000; and the average auto policy pays out up to $100,000 per person and $300,000 total per accident.

Adding an umbrella policy into the mix raises these potential payouts anywhere from one to $10+million.

Why own excess liability insurance?

Excess liability insurance is for “tail risk” events. These are the accidents/tragedies you hope never happen in life, and their probability of occurring is low. But, should they happen, their potential cost can be very high — especially if serious injuries or fatalities are involved. In those circumstance, legal settlements can quickly mount into the millions of dollars.

An umbrella policy is designed to kick in should one of those rare events occur where damages exceed the limits of your home or auto policy coverage. It protects you from having to forfeit your savings to make up the difference (or from having to declare personal bankruptcy).

For example, let’s say your teenager hits another car while driving and injures several people severely. You are sued to cover their combined medical costs of $800,000.

But if you don’t, you’ll have to come up with that half-million dollars on your own.

The following table helps clarify when umbrella insurance will pay out, as well as when it won’t: 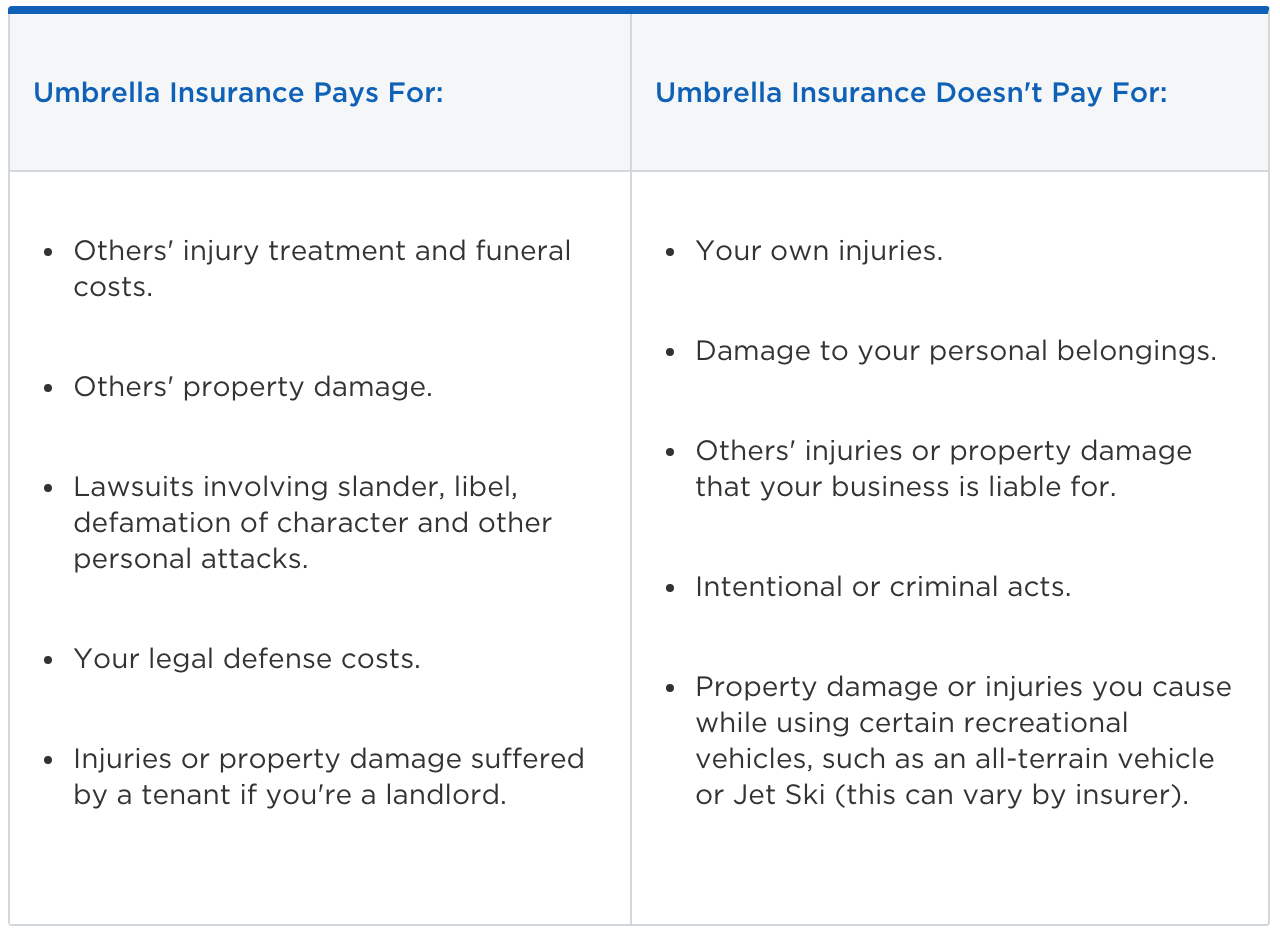 Note that if you’re deemed guilty of a criminal act, or otherwise demonstrated the intent to inflict harm, umbrella protections do not apply.

Because tail-risks have such a low probability of occurrence, umbrella policies are able to offer millions of dollars worth of protection at the cost of mere hundreds of dollars per year.

Policy rates differ of course from carrier to carrier (and are influenced by such factors as your driving history, net worth, household composition, and location), but here’s a schedule of typical annual umbrella insurance fees:

A few things to note here. First, you’ll see that a few hundred dollars buys several $millions of coverage. And that for each additional $100 in premium paid, an increasingly larger amount of coverage is received.

Second, by adding an umbrella policy on top of your existing homeowners/renters and auto policy, your carrier may elect to give you what’s called a ‘multi-policy discount‘, saving you money.

The takeaway here is that you can get a lot of protection for a relatively small annual sum. And additional coverage gets cheaper as you buy more.

There are a lot of alarming statistics that underscore the rationale for owning excess liability insurance, such as 13% of personal injury liability awards and settlements are $1 million or more.

But, it’s the personal stories that hit the hardest. The following are real-world examples of actual claims where umbrella insurance coverage applied (or would have applied if it had been purchased in advance):

The insured was driving legally on a highway when she was rear ended by another driver. The collision caused the insured’s vehicle to hit a barrier and bounce into a light pole. The other driver attempted to flee the scene on foot but was apprehended. He was uninsured, did not have a driver’s license, and was cited for numerous violations. The insured sustained two broken ribs, three broken teeth, contusions to her lungs, and lacerations to the head. After the insured’s primary auto insurance company tendered its full Uninsured Motorist limit, she was still left with $260,000 in medical expenses. The insured’s Excess Uninsured/Underinsured Motorist part of her umbrella policy paid the remaining expenses. [Note: this is a special case where umbrella insurance can pay for medical treatment for your own injuries.]

An insured permitted several of her children and their friends to play paintball in her large back yard. The children were advised of all safety precautions including to use face and neck protection at all times. A paintball participant removed her headgear as she was leaving the field and was struck in the eye with a paintball. The claim was settled for more than $475,000.

The insured’s tenant claims she lost her track scholarship to a four-year college when she became ill and lost part of her lung capacity due to Stachybotrys black mold found in her apartment. The tenant claimed permanent lung damage and demanded over $750,000.

A hillside on the insured’s property was covered with concrete to prevent erosion. The concrete had been installed before the insured purchased the property. Approximately 5 feet of the concrete fell into the neighboring property knocking the claimant’s home from its foundation. The resulting claim was settled for $970,000.

An insured’s daughter hated math class as well as the teacher. The daughter made several “disparaging” and false remarks about her teacher online. The teacher sued the parents for personal injury and $750,000 was paid.

Each of these sounds like an “It could happen to me” tale.

But it’s important to remember when reading the above that the probability of such events is very low.

You consider umbrella insurance in case such terrible events happen, not because you expect them to. Don’t let over-exaggerated fear cloud your decision-making when determining how much coverage may be appropriate for you.

How Much Excess Liability Coverage Should You Get?

Ultimately, you should obtain a qualified insurance agent’s advice in determining how much umbrella coverage to buy. But there are a few good guidelines to be aware of.

It’s widely recommended that you purchase at least as much coverage as your net worth. But most recommend purchasing at least $1 million more than that, or the present value of your current income stream, whichever is greater.

As they say, “You don’t have to be a millionaire to get sued like one.” Meaning: even if you don’t have a high net worth, umbrella protection makes sense. Spending a few hundred dollars each year for protection is vastly better than having your wages garnished for decades, or having to declare bankruptcy, should you be judged liable for an injury claim.

And of course, the more wealth you have to protect, the more coverage you’ll need. The premiums are so inexpensive that paying <$1,000 to protect millions in assets is a complete no-brainer. Why would you not do this?

In the end, excess liability insurance is about purchasing peace of mind. It keeps you from worrying about ‘losing it all’ should a tragedy occur. So, the rule of thumb for how much coverage to buy is: Whatever will allow you to sleep well at night.

The field of behavioral economics has long warned that our human evolutionary wiring poorly suits us for dealing with Low-Probability/High-Consequence events.

This explains why so many people don’t obtain sufficient coverage for these types of events — and umbrella insurance is no exception.

A survey conducted by Consumer Reports found that only 20% of US households hold umbrella insurance policies.

Even the rich are under-insured. 1 in 5 households worth $5+ million don’t have an umbrella policy. And of those who do have a policy, nearly 25% reported having less than $5 million in coverage.

If you don’t currently own any excess liability insurance, you should talk to an insurance agent asap to make sure you fully understand the risks of remaining uninsured.

This is especially important if you have kids in your household, as a high percentage of umbrella claims result from accidents caused by teen drivers. So if you’ve got teenagers, umbrella insurance is practically a must.

The good news is acquiring excess liability insurance is relatively easy. Odds are high your existing homeowners/renters and/or auto insurance carrier can add an umbrella policy on top of your existing coverage. And, as mentioned previously, you may receive a multi-policy discount from your carrier.

Just pick up the phone and ask.

And if you’re one of those already holding a sufficient amount of umbrella insurance, good for you. Pat yourself on the back for your foresight and prudence, and ask Are there other areas in my life where I could benefit from putting similar defensive measures in place today?

For example, have you already taken sufficient defensive positions in your financial portfolio to limit your losses should today’s extremely-overvalued financial markets plunge further from here, as seems increasingly likely?

If not, then consider reading our primer on How To Hedge Against A Market Correction in which we explain the standard range of hedging techniques that are commonly used to offer portfolio protection and/or upside during a market downturn. These include stops, inverse and leveraged securities, shorting, options, and futures.

Just as with umbrella insurance, when it comes to protecting your financial wealth against a vicious accident in the markets, it’s far better to be safe than sorry.