One day, a fruit and vegetable seller was arrested in Tunisia, sparking social unrest, and a few weeks later the government of Egypt was set to topple.

Such is the nature of complex, chaotic, and unpredictable systems. The stresses build for years and years, and nothing really seems to be happening, but then everything suddenly changes. Egypt is therefore emblematic of what we might expect in any complex system in which pressures are building, such as the US Treasury market.

Can events in complex systems ever be predicted? No…and yes. No, because the precise timing and details can never be predicted. Yes, because we can be certain that anything that is unsustainable will someday cease to continue and things that are horribly imbalanced will someday topple. We can also be certain that the change, when it comes, will be rather sudden and abrupt, rather than gentle and linear.

That is, we can easily predict that a complex system will shift, and that it will probably do so rapidly, but not exactly when or by how much.

How unbalanced was Egypt? Very.

Here are a few quite relevant statistics about Egypt (hat tip to an email from reader Mark O., with credit to Dr. John Coulter) to which I have added a few items:

The future of Egypt will be shaped by these few biophysical facts — a relentless form of math that is hardly unique to Egypt, by the way — and it matters very little who is in power. Given the choice, I would not want to live there, nor in any other country that has fostered or permitted such reckless population growth beyond what the country itself can sustain.

The interesting part is that these facts have been in plain view for decades, building into economic and social pressures that were suddenly unleashed in a wave of social and political unrest. How was it that such obvious things escaped notice for so long before they suddenly reared up into plain view? Instead of being a surprising exception to the rule, we should instead brace ourselves against the idea that this is just the way things tend to work.

Back to the main story. Without persistent (and rising) food imports, Egypt cannot feed itself. It has managed to cover up the shortfall by having enough oil to export, but, like every country, their oil reserves are finite and eventually they’ll face a day of reckoning.

The oil situation in Egypt has only very recently become an enormous and unavoidable issue.

The monthly peak occurred in December 1996 (the yearly peak was also 1996), and oil production is now down some 30 percent since then. 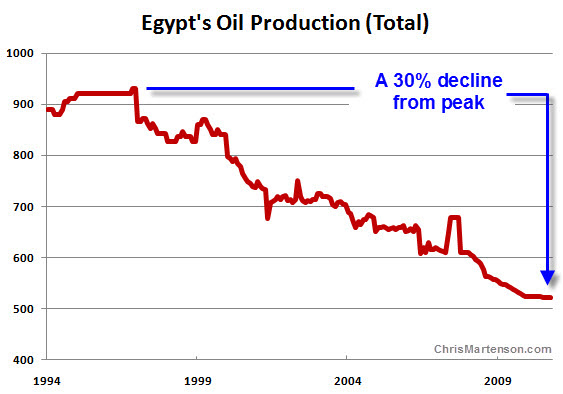 While it’s good to have plenty of production, what really matters to a nation that imports so much of its basic living items are exports.

Of course, there are two things that typically chew on a nation’s oil exports: falling production and rising internal consumption. With both of these dynamics in play, Egypt’s exports have been getting mauled, not by one, but by two exponential functions: 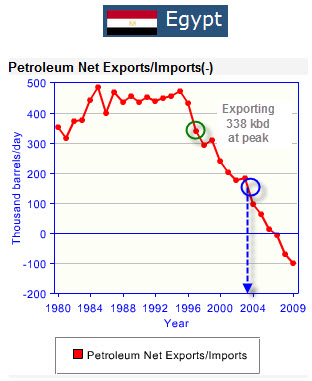 The green circle marks the date when Egypt hit its peak of petroleum production in 1996, and the blue circle and arrow marks when exports had fallen by 50%, just six years after peak production.

The gap between those two events, six years, is a very short amount of time to adjust to the new reality — too short, as it turns out. Such is the nature of a double exponential working against you.

[Note:  For the energy purists, this chart from the Energy Information Agency (EIA) misrepresents things somewhat. Egypt’s domestic oil consumption and production are virtually identical right now, but Egypt has the largest oil refining sector in Africa, which skews their petroleum imports to the negative side. But whether Egypt became a new petroleum importer this year or in 2007 is essentially a historical blink, and the story told by the trajectory of the chart is little changed by small matters of timing.]

Any country that has to import both oil and food is living on borrowed time. It was only a matter of time before something gave way, and apparently that time is now.

Hillary Clinton actually spoke something approximating the truth about this fact recently, although she was referring to the entire region, but nonetheless, it was an unusual moment of clarity for the US political structure:

US Secretary of State Hillary Clinton has said the Middle East is facing a “perfect storm” of unrest and nations must embrace democratic change.

Speaking in Munich, Mrs Clinton said the status quo in the region was “simply not sustainable”. “The region is being battered by a perfect storm of powerful trends.

“This is what has driven demonstrators into the streets of Tunis, Cairo, and cities throughout the region. The status quo is simply not sustainable.”

She said that with water shortages and oil running out, governments may be able to hold back the tide of change for a short while but not for long.

Water shortages and oil running out? I’d decode those ideas for you, but they speak for themselves. Food and fuel are running out. The irony here is that she may as well have been speaking about the United States, Japan, or any number of countries across the globe, but any admission of biophysical limits is a good start, I suppose.

Editorially, it’s not at all clear to me how the poorly defined concept of ‘democratic change’ will really change the equation much, as limits are immune to which ‘ism’ you happen to be running, but I am sure there are some in Washington DC who think ideology can trump reality. Regardless, I am somewhat surprised to see such obvious truths about water and oil being spoken by a senior US representative; it was unclear to me that anyone at that level had any awareness of these subjects at all.

My intent here is not to point out the future difficulties that Egypt faces, no matter who is charge, but to use the change that happened there as emblematic of what we might expect elsewhere, especially in the financial markets.

Egypt simply reminds us that anything that is unsustainable will someday change. It is an emblem for the world.

With abundant energy and food, we are treated to expansive and stable economies in which everyone stands a chance of gaining. Not that everyone will, mind you, but the possibility is there  In an energy-constrained world, what was formerly possible is no longer do-able, things don’t work right, and there seem to be persistent shortages of everything from growth, to money, to food, to goodwill. What used to work doesn’t. It is at these points that the prior stresses and imbalances are most likely to snap and suddenly change the world.

These are the very sorts of changes that are coming to the rest of the world. Perhaps to a country or financial market near you. Are you ready?

In Part II of this report, our just-released Guide to Navigating the Coming Crisis, we analyze how the same systemic breakages in Egypt will likely manifest in the United States (and other countries). Also, for the first time ever, we have summarized the entire ‘method’ by which we make sense of the world. This method has allowed us to both grow our wealth and sleep better at night. Yes, there are troubling events afoot in the world, but an accurate diagnosis goes a very long way towards relieving the stresses that can cloud good decision-making and narrow one’s field of view. We not only give you the information you need; we give you our best tools so that you can fashion them into the right actions that make sense for you.