Here at Martenson Central, we are endlessly keeping a close eye out for the emergence of deflation, defined here as the purchasing power of the dollar going up.

Technically, inflation and deflation are terms that indicate a particular combination of money surplus or deficit (respectively), demand for money (of which velocity is but one measure), and demand for various goods and services (which themselves may be in abundance or short supply).

The reason that the inflation vs. deflation debate has been so noisy, yet simultaneously so murky, is that all of these intersecting variables impact the final equation.  It is like the difference between trying to balance a single broomstick on your outstretched hand vs. trying to balance a broomstick with three well-greased hinges at points along its length.  The former is tricky enough to balance; the latter would be impossible for nearly everyone.

Some try to reduce the inflation/deflation debate to a single broomstick (“…all we need to do is look at declining credit and see that we are in deflation!”), but in my opinion, that is far too simplistic a view.  We still need to consider base money creation, velocity, and the relative level of faith in current and future monetary policy among the majority of market participants.

Because we cannot really know all the variables and how they are feeding back and forth between each other, we must simply look at the final impact to gauge where we are.  Fortunately, we can do this with relative ease.

Again, what we care about at the end of the day is whether our future money will buy more, or whether it will buy less — and, naturally, whether we will even have any coming our way.

The argument for deflation says that because of declining credit, people will hold onto whatever money they have for dear life, unsure if more money will be forthcoming.  In this case, the velocity of money will slow and collapse.

The argument for inflation includes the idea that existing debts are a form of money and that the world’s central banks are busy printing up more than enough new money to swamp both the commodities markets and people’s preferences to hold something that can be created without any effort or cost.

Many in both the inflationist and deflationist camps say that prices are not worth analyzing because they are the result of, not the cause of, either “-flation.”  But it would be a mistake to ignore prices simply because they represent the passenger, not the driver, in the story.  Knowing where the passenger is going can give you a pretty good indication of where the driver is headed, and therefore it’s important to keep a close eye on prices when assessing inflation/deflation.

On the plus side for inflation are commodity prices, which are again nearing their all-time peak and which have been compounding at an average annual rate of slightly more than 10% over the past decade. 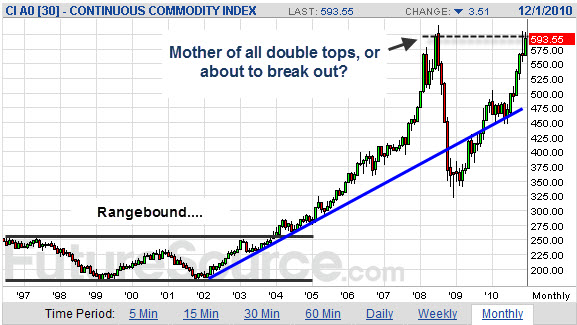 But they seem to be at a critical juncture on this longer term timeline.  Either they will break out from here, or they will be rejected, creating a massive double top not unlike the one seen in the stock market in 2000 and 2007.

Still, commodities could fall back a long way before they would violate the trend line in place since early 2002, when prices began the ascent that would see them finally break out of a long-standing range.

In my book, ten years is a respectable amount of time to assess commodity prices.  Beware those who cherry-pick the 2008 topping event as their reference point, as they are missing the larger story of the trend line that I have drawn in blue above.

But commodities are just a small component of the overall price landscape.  If one trusts the CPI statistic — and I really have my doubts about its construction and methodologies (that’s putting it mildly) — then it would seem that prices are actually quite tame and that disinflation (in which inflation is declining slightly month-by-month but still rising overall) is the greater concern, as the Fed has claimed.

But even here, when viewed on a longer time frame, I really do not see anything to suggest that we are facing a dire catastrophe of price collapse: 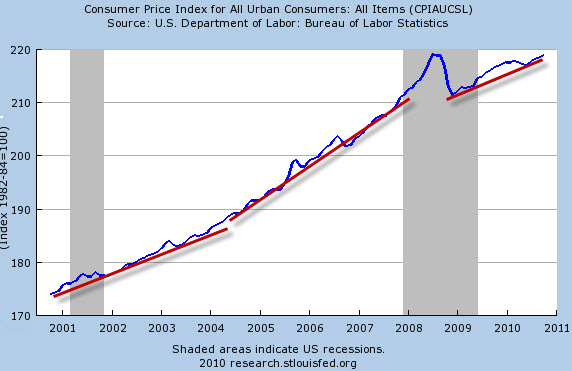 What I see in the above chart is that prices first climbed at one rate between 2001 and 2004 (first red line segment on the left), then climbed at a faster rate until a blowoff in 2008, have since recovered, and are climbing again quite handily.

For the record, I happen to think that the CPI systematically undercounts inflation due to underweighting certain components (especially medical care) and completely avoiding the impact of taxes on spending and costs.  Given this, the fact that the CPI is higher this year than last year, we have to score another one for inflation.

But it’s almost certain that inflation is higher than stated by the CPI, so we might want to rate that one just a little bit more strongly than a literal interpretation of the CPI might suggest.

On the subject of house prices, the situation strongly favors deflation.  And given the importance of housing to the health of bank balance sheets and consumer wealth effects, this is certainly one of the demons that the federal government and Federal Reserve are fighting tooth and nail: 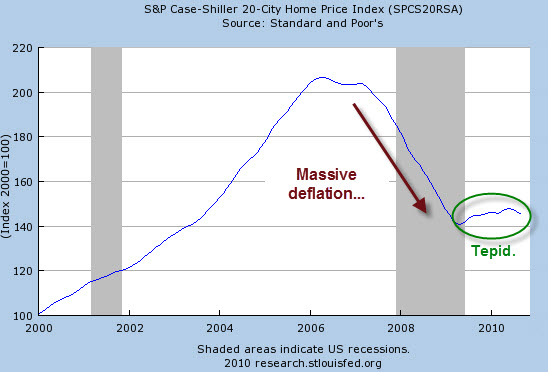 While house prices are above where they were a year ago, the bounce has been anemic at best and has recently turned down again.  This is a very poor sign.  Score one for deflation.

Stocks are now at two-year highs, bonds are up quite strongly over the past several years, and oil is at a two-year high.  All of these weigh towards inflation being the dominant theme of the day.

With regard to prices alone favoring inflation, we find that commodities, stocks, bonds, medical costs, college tuition, and the CPI itself are all up over the past year, and in the case of everything but stocks, the past decade.

The point of this approach is to keep prices firmly in view when thinking about inflation and deflation.  While the theories about the role of money and credit as the drivers of the ‘-flations’ are very important to understand, what we really care about at the end of the day is the final impact on our purchasing power.  By nearly every measure, except in limited cases sprinkled throughout (with housing being the most visible and important), we find that prices have been rising smartly.  Or we could say that the dollar and other fiat currencies have been sinking, which is a more accurate way to think about the dynamic.

This should not surprise anybody, as it is the obvious result of massive printing efforts undertaken by nearly every OECD central bank in response to the prior crisis caused by too-cheap money.  Nor should it confuse students of our economic system, who know that continuous increases in asset prices and real things are essential to the very functioning of the entire system.  Growth is a requirement of our monetary system and, by extension, our economic system.  With growth, everything is fine and the status quo can be preserved.  So naturally there is strong support for all manners of growth within and across our political and financial institutions.  Without growth, the system misfires and threatens to collapse.

Those who read history also know that inflation is by far the more common outcome of a situation in which there is entirely too much sovereign debt that cannot be repaid by ordinary means.  All one needs is to take a quick glance at the balance sheets and off-balance-sheet obligations of practically every developed country to realize that collective insolvency is the correct term to apply.

So at this point in the story, we see that prices have been rising, our fiscal and monetary authorities are trying quite hard to foster even more rapid price escalations, and they are doing so because the system demands it of them.

Right now, based on prices, we have to score inflation as the winner, although we’ll be the first to change our tune should the data change

Part II of this report covers the rest of the story by going into money and credit (the true drivers of the ‘-flations’) more deeply, as well as other economic data important to helping us figure out where we are in this story, how much time might remain before another “adjustment” arrives, and what we might do about protecting our wealth and opportunities. Click here to access Part II (free executive summary; paid enrollment required to access).