The truest gold buffs, though, want nothing to do with ETFs or mining stocks. Mr. Martenson, who runs an investing Web site, dismisses them as creatures beholden to untrustworthy managements and financiers. “I’ve lost faith in how Wall Street does business,” says Mr. Martenson, who keeps more than half his portfolio in bullion. 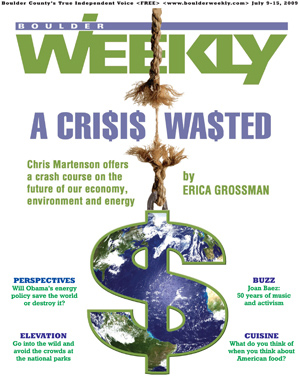 Dr. Chris Martenson on the July 9 Cover of Boulder Weekly

A Crisis Wasted: Scientist and economist Chris Martenson offers a crash course explaining
what we should be learning from our current global situation
by Erica Grossman

Chris Martenson is a man who wears many hats. Having completed both a PhD and a post-doctoral program in Neurotoxicology at Duke University, he uses his science background to inform his decisions about energy use and the environment. With his MBA in finance from Cornell, he is considered an expert in matters economic. Martenson has worked in corporate finance and strategic consultation and made a living as the executive of a Fortune 300 company and the vice president of a Fortune 50 company. But Martenson doesn’t live the kind of lifestyle you might expect from a high-powered financier/scientist. He and his family have downsized their home, rather than climb up the social ladder. They dig their gardens instead of sending someone out to the grocery store. And all because of one of Martenson’s predictions: The world in 20 years will look drastically different than the world we know today.

More on Unemployment: The "Exhaustion Rate" Underestimates the Issue (Chart on page)

There is some confusion out there as to what exactly the "exhaustion rate" is (I had been confused myself). The following definition has been commonly used by many blogs and media pundits alike:

The United States Department of Labor publishes statistics on the "exhaustion rate" – this is a measure of the number of people who have used up their benefits, and will no longer be receiving unemployment checks.
This definition had been correct. And if this were still true, the chart below would show just how large a crisis we were in with those that are no longer able to receive unemployment at almost 50% of their "unemployment" class.

Unfortunately, this equation misses a large change in the U.S. unemployment legislature which results in the figure actually being even worse.

Again, the definition HAD been true. The reason why it is HAD, rather than HAS is that the calculation for the exhaustion rate has not changed, even though benefits have been extended not once, but twice over the past year (first from 6 months to 9 months in July and then to 12 months in November). 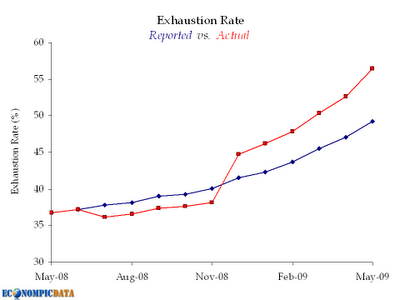 Contraction is not an Improvement (Chart)

The issue is not whether Asian central banks will continue to have confidence in the dollar, but why Asian central banks should see their mandate as supporting the continuous expansion of the dollar economy through dollar hegemony at the expense of their own non-dollar economies. Why should Asian economies send real wealth in the form of goods to the US for foreign paper of declining value instead of selling their goods in their own economy?

Without dollar hegemony, Asian economies can finance their own economic development with sovereign credit in their own currencies and not be addicted to export for fiat dollars that repeatedly lose purchasing power because of US monetary and fiscal indiscipline. As for Americans, is it a good deal to exchange your job for lower prices at Wal-Mart? (See Follies of fiddling with the yuan, Asia Times Online, October 23, 2003, for a detailed analysis of the relationship of the Chinese currency to the dollar.)

This morning I had seen a third "notice" that there are widespread "critical shortfalls" in Union Pension Funds.

I put up a short video on the topic and am now getting emails telling me that this is more widespread than has been reported – additional funds have been sending these deficiency notices out.

And in that article I called for general strikes organized by the unions of this nation – what’s left of them anyway.

California: $53.7 billion shortfall or 58 percent of its budget

Arizona: $4 billion shortfall or 41 percent of its budget

Illinois: $9.2 billion or 33 percent of its budget

Alaska: $1.35 billion shortfall or 30 percent of its budget

Washington: $3.6 billion or 23 percent of its budget

Connecticut: $4.1 billion or 23 percent of its budget

China and the USD (Video)