Why is US Government Subsidizing Chinese PPIP ?

Dick Bove points out this is insane:

It is being reported that China Investment Corp (CIC) intends to purchase $2 billion of AAA rated, distressed mortgages in the United States. The press reports are suggesting that CIC is presently interviewing 9 American money managers.

These managers have been approved by the Treasury to participate in the PPIP program as servicers. CIC will pick one or perhaps two to manage its investment program.

Note that the PPIP program:

Has the Treasury matches whatever a private investor puts up, then credits 6X as much capital. So if the Chinese are buying $2 billion, the US puts up $2 billion, and then the PPIP allows the purchase of $24 billion of distressed assets in the open market.

All for $2 billion dollars. Oh, and the FDIC would guarantee the debt being issued by the PPIP.

Hence, taxpayer dollars are subsidizing Chinese purchases of U.S. assets at a discount.

The Drawing Board – Three Tier Proposal (Video on page)

$3 trillion in U.S. mortgages are in a negative equity position. What this means is borrowers owe more than their home is worth. A few research papers have shown that the number one factor in determining potential foreclosure is being upside down on a mortgage (job loss is up there as well). You can rest assured that all those Alt-A and option ARM mortgages in California are underwater to the point of touching sea bottom. How bad can it get? One area in Southern California, the Inland Empire has an estimate total housing property value of $222 billion. Only problem is there are $238 billion in mortgages attached to these properties. Two enormous counties with negative equity. 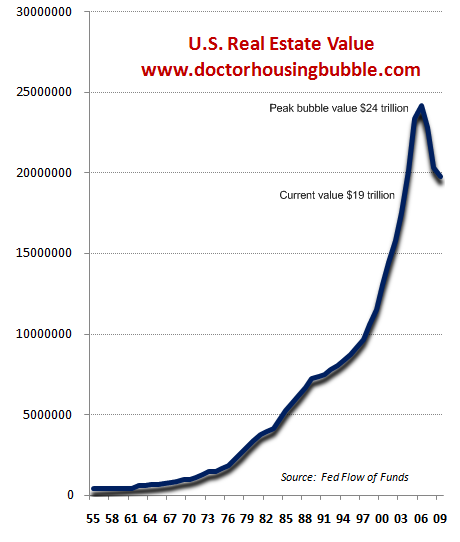 The U. S. A. is noteworthy in having the most skewed wealth distribution among the more advanced nations of the world….To accommodate for this I considered two scenarios: one where one third of all homes had no mortgage and one where 40% had no mortgage.

To establish the denominator (residential property value) in the nation’s aggregate mortgage loan-to-value ratio I took two thirds of the residential property value in the flow of funds accounts at the 2006 peak in home prices. I then reduced this value by 41% which is my estimate of the overall home price decline that will take the Case Shiller index back to its mean in real terms assuming no inflation over the next two years. Against this I put the total household mortgage debt of all kinds — firsts, seconds, thirds, HELOCs — at the end of Q1 for which we have the latest flow of funds data. That figure on mortgage debt is down from the peak of 2006, but not by much. I should add that, owing to negative amortizations and securitizations, I believe that, if there is an error in the flow of funds data on outstanding mortgage debt, it is one of underestimation.

Now all one has to do is simple division: take the ratio of outstanding mortgage debt to the projected value of all mortgaged owner-occupied residential real estate when home prices fall by 41%. That ratio exceeds 120%.

I made the same calculation, but using the assumption that 40% and not one third of all homes have no mortgage. The resulting aggregate loan-to-value ratio for all indebted homes is 134%.

The notion that deficits do not matter is a widely held and deeply ingrained economic philosophy. This line of thought took a stronghold in the 1980s and has seemed to stick to our ever-growing dismay. Yet budget deficits do matter if we are looking at an economic horizon that is longer than one fiscal year. You need to put this into context of your own household. If you as an average American spend more than you make, it will eventually catch up to you. In a more distant past, the American consumer did not have access to debt as they do now. So they in effect had the ability to run localized deficits. Americans took this notion of spending more than you earn to heart. Many bought homes, cars, entertainment systems, and other consumer goods that simply did not jive with their income. This can last for a few years but eventually it will catch up. Now we are seeing the housing bubble burst and bankruptcies soaring.

Now I want to bring this to a more micro level because similar rules apply to larger systems. Many Americans have had their access to credit cutoff. The U.S. Government for many years has been relying on cheap money fuel from foreigners to keep our deficit engines going. This will only work if we can eventually get the revenue side of the equation up. Otherwise, foreigners will do what many credit card companies are doing to consumers and that is pulling away that easy debt. It probably helps to see the actual cash flow sheet of the United States:

Is This the Start of the Big One?

The fall in the markets overnight, particularly the 5.8% drop in Shanghai, seems significant in combination with other factors:

Delinquency of 60 days is considered a precursor to foreclosure, because of the difficulty homeowners would have coming up with two back payments to bring themselves current.

Rep. Barney Frank (D., Mass.): I worry, frankly, that there’s a tension here. The more people, in my judgment, exaggerate a threat of safety and soundness, the more people conjure up the possibility of serious financial losses to the Treasury, which I do not see. I think we see entities that are fundamentally sound financially and withstand some of the disaster scenarios. . . .

Secretary Martinez, if it ain’t broke, why do you want to fix it? Have the GSEs [government-sponsored enterprises] ever missed their housing goals?

We titled this episode we talk with Nathan Martin of the website ‘Nathans Economic Edge’, one of the many excellent blogs on the internet trumpeting the problems in our financial system and how the problems still persist despite all the government intervention.

During our one hour talk we try to look back on the events that led us down the road to our national insolvency. We also explored many of the problems that still exist and will exist unless something… ‘happens’. It was an excellent conversation with Nathan and we look forward to talking with again in the future.

We will be releasing an ‘Afterhours’ portion of this podcast whenever i get around to editing it. Also, I am looking for listeners to submit 3-5 minute audio MP3 files in which they talk about an issue that would be of interest to our listeners. Thank you,Steve