Chris, I’m not sure I understand this. How could baby boomers
outnumber the generation behind them? Total fertility rate for the
baby boomers is projected to settle around 2.1 (approximately equal to,
or just slightly below, the replacement rate).

The fact of the matter is that there’s a "hole" in the demographic profile right behind the boomers.

The chart below is not a "rate chart". The length of the bars corresponds to the numbers of people broken out into 5 year age increments. The longer the bar, the more people it represents.

We can state, unequivocally that there are more boomers than there are people in the cohort behind them.

See that pink box (below)? That represents the boomers. There are more of them than there are people in the next set of three bars. 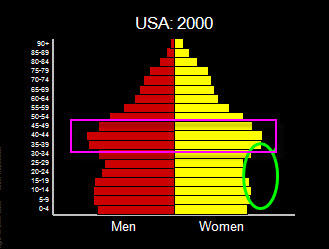 Now look above the boomers. See that nice, smooth triangle shape? When the boomers were acquiring their financial assets they were buying them from a smaller pool of people.

Some have posited that this partially explains the 20 year bull market in bonds and stocks where prices were driven to historical extremes where they remain to this day (the recent pullbacks in stocks notwithstanding).

The logic here is that people’s earning power is not constant but
peaks between the ages of 45 and 55.This means that as boomers approached their peak years of earning and associated acquisition of financial assets, they were buying them from a smaller pool of sellers.

What is considered an "acceptable p/e for stocks" has crept up almost in lock-step with boomers earning power, raising the possibility that this view is less indicative of a new appreciation of risk and reward and instead a simple case of supply and demand.

Interestingly, the forward p/e in stocks is still around 20, if we use S&P’s forward estimate of earnings.  That’s too high by historical measures, but not recent standards.  Will this view change?  That’s worth pondering.

This "normal" valuation for stocks is not at all normal, and I strongly
suspect it reflects the relative buying pressure imposed on stocks
during the long sweep of boomers advance into their peak earning (and
savings) years.

Back to the chart and the notion of peak earning years.

Hence, my statement that there will be more sellers than buyers.

Of course, this dynamic will only be exacerbated by the extent to which Social Security and Medicare promises are not kept.

The notion of "building wealth" by holding financial assets that will inevitably gain in price is quite possibly an illusion propped up by having an appropriate demographic profile (a nice fat pyramid) and not something we can simply take for granted.  We may yet discover that financial asset appreciation depends more on demographics than we suspect.

An intriguing clue is provided by Japan, ten years in front of the US with their own demographic bulge,  which has not managed to recreate the former glory days of their stock market despite some sophisticated (if not heavy-handed) financial intervention, raising the prospect that the issue was not one of finance, but of aging.