For most people, the collapse of civilizations is a subject much more appetizingly viewed in the rearview mirror than straight ahead down whatever path or roadway we are on.

Jared Diamond wrote about the collapse of earlier civilizations to great acclaim and brisk sales, in a nimbus of unimpeachable respectability. The stories he told about bygone cultures gone to seed were, above all, dramatic. No reviewers or other intellectual auditors dissed him for suggesting that empires inevitably run aground on the shoals of resource depletion, population overshoot, changes in the weather, and the diminishing returns of complexity.

Yet these are exactly the same problems that industrial-technocratic societies face today, and those of us who venture to discuss them are consigned to a tin-foil-hat brigade, along with the UFO abductees and Bigfoot trackers. This is unfortunate, but completely predictable, since the sunk costs in all the stuff of daily life (freeways, malls, tract houses) are so grotesquely huge that letting go of them is strictly unthinkable. We’re stuck with a very elaborate setup that has no future, but we refuse to consider the consequences. So messengers are generally unwelcome.

Will the cost or availability of oil threaten America’s Happy Motoring utopia? There should be no question. But rather than prepare for a change in our daily doings, such as rebuilding the railroad system or promoting walkable neighborhoods over suburban sprawl, we tell ourselves fairy tales about how the Bakken shale oil play will make America “energy independent” to provide the illusion that we can keep driving to Wal-Mart forever.

This is an especially delusional season in the U.S., with salvos of disinformation being fired every day by happy-talkers seeking to reassure a nervous public that everything is okay. Just in the past few weeks, we’ve seen an Atlantic Magazine cover story titled “We Will Never Run Out of Oil” followed by a report from the International Energy Agency (IEA) stating that the U.S. would become the world’s number-one oil producer by the year 2020, and many other bulletins of comforting optimism from The New York Times, NPR, and Forbes. The Atlantic Magazine used to be a credible organ of the American thinking classes, and the Paris-based IEA is vested with authority, though its political agenda – to prop up the status quo – is hidden. In any case, these are the interlocutors of reality for the public (and its leaders), and the memes they sow travel far, wide, and deep, whether they are truthful or not. The infectious cornucopianism they gleefully retail has goosed the stock markets and made it even more difficult to put out the contrary view that we are in deep trouble, perhaps even on the verge of an epochal disruption.

The Warnings of History

Dmitry Orlov published a fascinating book on this subject in 2008 titled Reinventing Collapse: The Soviet Experience and American Prospects. Orlov, born in Leningrad (now St. Petersburg) in 1962, had the unusual experience of emigrating to the U.S. as a twelve-year-old in the mid 1970s, and then returning periodically to what is now called Russia before, during, and after the collapse of its Soviet system. He had a front-row seat for the spectacle and an avid intelligence rigorously trained in the hard sciences to evaluate what he saw. He also possessed a mordant, prankish sense of comedy that endowed his gloomy subject with a lot of charm, so that reading him was the rare pleasure of encountering true prose artistry on a par with his countryman and fellow émigré, the late Vladimir Nabokov. Nabokov was a scientist, too, by the way, working for years as a professor of entomology (insects, with a specialty in butterflies) to pay the light bill.

Recall the smug triumphalism in America that greeted the shockingly sudden collapse of the sclerotic USSR in 1991 (no bang and little whimpering). Serious historians were so intoxicated that one of them declared it to be “The End of History,” meaning that there would be no more geopolitical struggles henceforth, a preposterous idea that became instant dogma from Harvard to the U.S. State Department. To our pols and their wonks, it proved the manifest superiority of neoliberal corporate capitalism. Case closed. Now the USA could go forth unopposed and turn the Black Sea into a lagoon of pure Coca Cola, bringing liberty, democracy, Chicken McNuggets, and Michael Jackson videos to the disadvantaged citizens of long-benighted lands yearning to “consume” freely.

From his special perch between the two nations, Orlov saw the whole show differently: as a warning that the U.S. would probably meet a similar fate, but that the outcome for us would probably be much worse due to our massive stranded assets (the whole kit of suburban sprawl), our degraded sense of public goods, our lost traditional craft skills, and our pathetic lack of mental fortitude. The arguments he presented were clear, sensible, and absent in virtually every other venue where people discussed the repercussions of the Soviet collapse. To me, Orlov’s points were startling in the slap-your-forehead sense of …but of course! Why didn’t I think of that?

History to Repeat Itself “Over Here”?

For instance, Orlov pointed out that the food production system in the Soviet Union had been so direly mismanaged for so long – most of the 20th century – that a whole counter-system of work-arounds had been established in the form of nearly universal household gardening. Even families who lived in the ghastly Modernist apartment slabs of Moscow had access to garden plots in the vast un-suburbanized Russian countryside, and they could get there on public trains and buses. The more privileged had dachas ranging from humble shacks to fancy villas, each with a garden. The Russian people were used to the necessity of growing their own food and had the skills for preserving it to offset the idiocy of the official distribution system in which citizens wasted whole days waiting on line for a cabbage, only to be told they had run out. When the Soviet system collapsed, the effect on society was far less than catastrophic, perhaps even salutary, because a large cohort of people with an interest in growing food, who formerly only pretended to work in dismal bureaucratic jobs, were now available to reoccupy and reactivate the de-collectivized farming sector that had been a drag on the Russian economy for generations.  After a period of adjustment, one thing was self-evident: no more lines at the Russian grocery stores.

Summer retreats provide not only solace but lots of produce – and even more of it now, amid economic hard times. 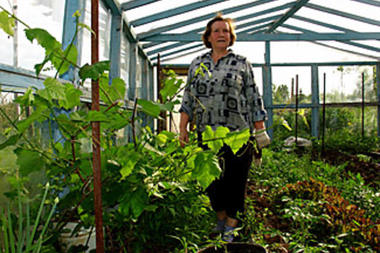 Home grown: Lydia Kolbetskaya stands in her greenhouse in this summer-cottage village 100 miles east of Moscow. She grows strawberries, tomatoes, and more – enough for the retiree to feed herself and help her daughter’s family.

By contrast, in the U.S., even farmers don’t have kitchen gardens. This is not a myth. I live in an agricultural backwater of upstate New York where dairy farming modeled on industrial agri-biz reigned for decades (it’s in steep decline now), and as a rule, the farmers do not grow gardens. They buy balloon bread, Velveeta, and Little Debbie Snack Cakes at the supermarket, just like the insurance adjusters and other office drones, and whatever leftover part of their farm is not planted in corn is occupied by an above-ground pool, or the carcasses of retired all-terrain vehicles, or the miscellaneous plastic crap associated with raising children in a “consumer” culture.

When even farmers don’t grow any of their own food, you can bet that a lot of knowledge has already been lost. American supermarkets operate on a three-day resupply cycle. The system is much more fragile than most Americans probably suppose. My guess is that few even think about it. The resupply system has never failed, except briefly, in localities hit by natural disasters. However, a financial crisis could cripple the food distribution system of the entire nation. Truckers who don’t get paid won’t deliver. Trouble in the Middle East oil nations could provoke an oil crisis – something we haven’t experienced since the 1970s.  There are many ways for this complex system to fail – the point being that when it does, there will be no backup, as was the case in the former Soviet Union. So one might conclude from reading Orlov that our prospects for being able to feed ourselves are a lot worse.

Housing bears a similar story. There was no private real estate in the old USSR. People just occupied apartments and homes that belonged to the state and were assigned largely on the basis of privilege and connections to the people in power. When the political system collapsed, nobody got kicked out of their dwelling place. No foreclosures occurred. Over time, the situation took care of itself emergently, shall we say. Private ownership resumed after a 75-year hiatus. Laws regulating it were put in place. Many Russians ended up in possession of apartments and houses they had occupied for decades, and a real estate market emerged from that (with some strong-arming from the potent Russian mafia).

Contrast that outcome with America’s experience beginning in 2007 with the imploding housing bubble: an extravaganza of foreclosure and even homelessness. And that episode must be considered a preview of coming attractions, because the U.S. has not entered the robust phase of collapse yet. When that happens, you can expect the tribulations of property loss to be epic. It could throw our system of property law into chaos for a generation or more, as the volume of foreclosures would become virtually unmanageable. Property law is at the core of our political system, which would then follow directly into an unmanageable condition. Orlov’s point, I think, is that a political collapse in the U.S. would leave many more people discommoded than was the case in old Soviet Russia.

Similarly, too, bodes transportation. The Russians never adopted a culture of car dependency. A small minority of connected people had cars that they ostensibly “owned,” but the vast majority of the population depended on an elaborate public network of subways, trams, buses, and railroad trains. As a result, they never constructed an alternative universe of suburban sprawl. When the Soviet system imploded, the trains, buses, etc., kept on running. Russians could still get where they had to go to do what they had to do (rebuild their lives). We in America have poured our accumulated national wealth into a drive-in utopia that has no future in the remaining years of non-cheap oil. Any kind of an oil problem, whether it is a sharp geo-political event or just the slow crushing grind of high gasoline prices, will leave Americans stranded.

The arc of history is clear on what can (and usually does) happen when societies exceed their ability to support themselves sustainably. The swift vaporization of the USSR is our most recent example; one that should be especially concerning to Americans as the U.S. (for reasons cited) is less prepared to absorb the shocks of a similar systemic failure.

In Part II: A Clear Picture of What to Expect, we examine Orlov’s most recent work, which shows how sovereign collapse progresses along a well-understood trajectory: Financial > Commercial > Political > Social > Cultural.

The U.S. looks certain to follow this progression – at least partway – in our lifetimes, likely sooner than later.

In the meantime, remain aware that the decisions we make and actions we take now will have outsized repercussions for our future. Act wisely and act soon.