One of my favorite outfits is Sprott Asset Management, located in Toronto Canada, because their analyses tend to be quite data-rich and “reality-based” as well.

In this excellent, short-and-sweet report, the case is made that a 3.5% boost to GDP from government stimulus spending alone will hit in the third quarter of 2009.

This means that whatever reading is turned in, you should mentally subtract 3.5% from it, because “growth” resulting from government deficit spending is not real growth at all, it is merely consumption borrowed from the future.

Are you stimulated yet? We hope you are, because we’ve just witnessed the largest economic stimulus in the history of the world. Never before have so many government dollars been thrown at the economy to prevent a depression. When added together, the combined financial, monetary and fiscal stimuli in the US are more than the cost of the two World Wars and “The New Deal” combined.

Stimulus spending worldwide has taken the form of a combination of tax cuts, transfer payments (free money) and infrastructure investments on roads, schools, railroads etc. In the US, the financial and stimulus contributions have been especially impressive in scale.

According to CNN’s bailout tracker, the various US government departments have committed to stimuli worth $11 trillion dollars and have issued cheques totaling $2.8 trillion dollars thus far in 2009.

Neil Barofsky, the Special Investigator General for the TARP program, has estimated that the total cost to the US taxpayer could be as high as $23 trillion.

The vast majority of this stimulus has been directed at the financial sector – a complete waste of money in our opinion, supporting a segment of the economy that never deserved to be bailed out.

Nonetheless, the US taxpayer has spent massive sums, committed to promises worth even more and may ultimately owe debt in the double-digit trillions when all is said and done. Nice of them to spend so generously, wouldn’t you say?

Although the stimulus has been fantastic for the stock market, it has generated very little benefit for “Main Street”. To make matters worse, the effects of the stimulus packages have already started to wear off.

To explain why, we must mention the American Recovery and Reinvestment Act of 2009 (ARRA), which was specifically directed at stimulating the real economy as opposed to “saving Wall Street”. ARRA calls for a total spend of $787 billion, which breaks down into $287B in tax breaks, $192B in direct aid and $308B in discretionary spending. According to

Christina Romer, a White House economic advisor, 70% of this stimulus will be spent by the end of September 2010. What impact will this stimulus have on the economy?

Chart A presents results from Moody’s that is representative of several private forecasts that we have reviewed. 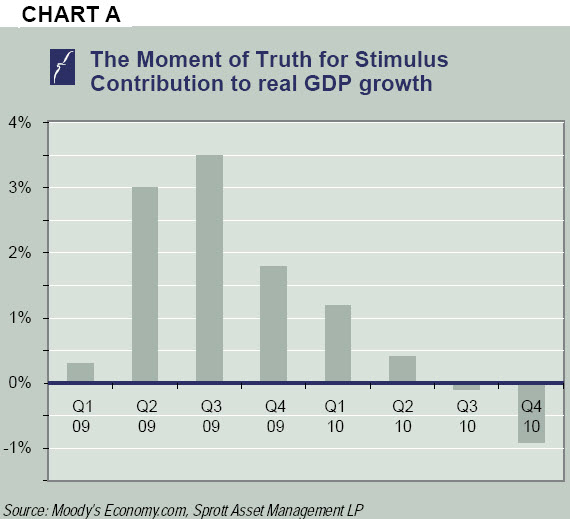 The chart illustrates the ARRA’s impact on real GDP by quarter, and reveals that right now, in Q3 2009, the US is experiencing the maximum impact of the Obama stimulus package. That’s right – this is as good as it gets. The majority of the Act consists of tax cuts and transfer payments to citizens, the impact of which was felt within the first two quarters of being received.

The “recovery,” which will be trumpeted at maximum volume beginning in mid-October, will be a statistical recovery that only a politician (or Wall Street stock hustler) could love. But looking at how the government stimulus will be wearing off entirely in 2010, you can well appreciate why talk of a second government stimulus is already floating about the airwaves.

Certainly this bit of news, especially the way it was framed, tells me that the ground is being prepared for another large round of government stimulus and deficit spending. Why do I think this? Because things get framed by politicians in the negative when it serves them to do so, and positively all the rest of the time.

Economy In Much Worse Shape Than Expected: White House

The US economy will shrink far more than expected this year and will rebound much more slowly than forecast after that, according to a bleak new assessment by the White House Budget Office.

The federal government also faces exploding deficits and mounting debt over the next decade, far worse than what the Obama administration had estimated just a few months ago.

The revised estimates project that the economy will contract by 2.8 percent this year, more than twice what the White House predicted earlier this year.

Obama economic adviser Christina Romer projected that the economy would expand in 2010, but by 2 percent instead of the 3.2 percent growth the White House predicted in May.

Where it is now projected that the economy will contract by 2.8% this year, you can mentally subtract an additional 2.2%, which is the total contribution to GDP offered by the stimulus spending. So call it a 5% contraction without the stimulus. And this only includes the federal government contribution. Once we add back in the amount by which the federal government should have shrunk due to collapsing revenues, plus the Fed’s own actions, plus state government deficit spending, I think we can make a strong case for a double-digit GDP decline this year.

Continuing on with the same article:

Figures released by the White House budget office foresee a cumulative $9 trillion deficit from 2010-2019, $2 trillion more than the administration estimated in May.

Moreover, the figures show the public debt doubling by 2019 and reaching three-quarters the size of the entire national economy. Romer predicted unemployment could reach 10 percent this year and begin a slow decline next year.

Orszag, anticipating backlash over the deficit numbers, conceded that the long-term deficits are “higher than desirable.” The annual negative balances amount to about 4 percent of the gross domestic product, a number that many economists say is unsustainable.

First, the statement, “the public debt [sic] doubling by 2019 and reaching three-quarters the size of the entire national economy” is very slippery.  Here they are distinguishing between all government debt, which already stands at more than 80% of GDP, and “publicly-held debt” (the proper term), which is a bizarrely narrow and irrelevant figure to draw upon.

What really matters is not just the debt of the government, but its entire accrual-based liabilities, which stand at somewhere between $50 and $100 trillion. On this basis, the US government is entirely insolvent, so debating whether the publicly-held debt is 75% or 90% or even 140% of GDP is like arguing about proper tire pressure for a wheel that’s been slashed open.