Below is an alert I sent out on Wednesday evening.  I want everyone to see what is at the forefront of my thinking right now.

I am busy writing up my next layers of thought around this development and will make that the basis of my next Martenson Report or two.

Why?  Because this recent action by the Fed is a "game changer."

In a shocking development that I frankly hoped we’d never actually see, the Federal Reserve dropped a bombshell yesterday and announced that it is going to create an extra $1 trillion dollars out of thin air to support the spending desires of the US government and to drive down interest rates for mortgage borrowers.

Of course, this will continue to punish savers and pension plans, but those, frankly, are of no concern to the Fed.

Below I explore this outrageous turn of events. Please note that I have not had much time to digest this incredible news and that I reserve the right to add to (or amend) my thinking over the next few days.

Fed to Buy $1 Trillion in Securities to Aid Economy

WASHINGTON — Saying that the recession continues to deepen, the Federal Reserve announced Wednesday that it would pump an extra $1 trillion into the mortgage market and longer-term Treasury securities in order to revive the economy.

As expected, the Fed kept its benchmark interest rate at virtually zero. But in a surprise, it dramatically increased the amount of money it will create out of thin air to thaw out the still-frozen credit markets that have cramped lending to consumers and businesses alike.

The dollar took a massive hit.

Gold, down some $25 on the day prior to the announcement, finished up $50. 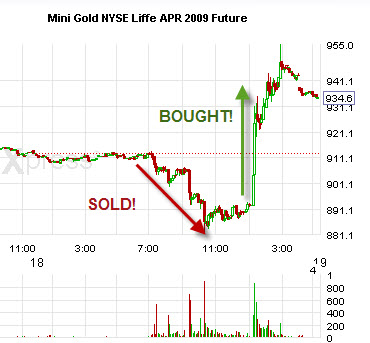 Stocks rallied while the long bonds (10, 20 and 30 years) were bought hard driving yields down by massive amounts before giving back ~ 50% of the move.

Given the recent revelations that Goldman Sachs and other well-connected players in the AIG scandal got billions of dollars directly from the US taxpayers for their side-bets with AIG, I will not be at all surprised to find out in a few weeks or months that Goldman Sachs, JPM, and others were magically positioned to make a killing off of this move. That’s just raw speculation, but it fits with the general pattern of conflicted enrichment that has stalked every move in this grand looting operation so far.

In fact, the constant drip-drip-drip of news about self-dealing by insiders with zero legal consequences for the perpetrators leaves me with the queasy feeling that every attempt at finding a legitimate resolution to this crisis will be thwarted by a crowd of Wall Street insiders who simply cannot resist an opportunity to redirect money into their own pockets. But that’s another story.

For now the main plot line is the fact that the US has just decided to openly print up another trillion dollars in order to buy more dodgy debt from itself.

Here are a few dots related to this action that we might connect.

I think this will be frowned upon by the Chinese.

However, I think this move is also a tacit admission by the US that it can no longer depend on the rest of the world to meet its borrowing and expenditure desires. As I outlined in a blog post yesterday (Funding Nightmare for the US), there’s been an extremely dramatic outflow of foreign money from the US that all but guaranteed this recent Fed move was a certainty.

Here’s a chart showing the net foreign capital flows to the US. After hitting a dramatic peak late in 2006, there has been what can only be described as a collapse in foreign purchases of US financial assets. 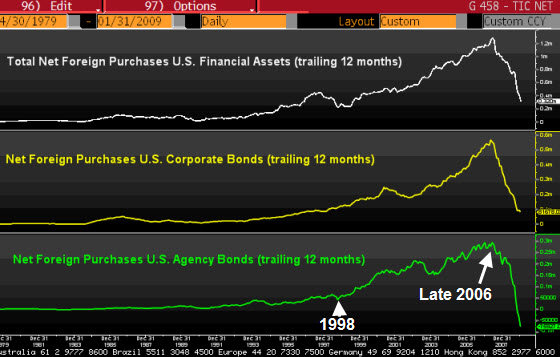 This chart is about as scary a chart as you could ever want to see if you happen to hold a lot of US dollar debt, as does China.

This chart foretold the move by the Fed today to attempt to print our way out of trouble (no money was available anywhere else) and it tells us that the prospect of a dollar crisis is a very real concern for the future.

The reason why can be captured by a very simple calculation.

Unfortunately, not only is the right side of the equation not equal to $3 trillion, but it was negative $150 billion in January. Where we need $3 trillion to flow in, we saw $150 billion flow out in a single month.

The extent there’s an imbalance in this equation is the extent to which the dollar will lose value. I think that reality just caught up with the markets.

Today we saw a mighty decline in the dollar. Here it is again.

That’s just huge. Maybe not if it was the stock price of a company just announcing poor earnings, but absolutely gigantic for the reserve currency of the world. Trillions just sloshed out of one currency and into all the others. Such movements are almost certainly injecting a huge dose of stress into an already strained system. Such wild gyrations are certain to result in an incident sooner or later.

My read on the dollar is that it is an exceptionally overproduced and (still) overvalued piece of paper. That’s just on the basis of how many have been produced and sent overseas over the past few years as compared to the productive capacity of the US.

Now that another trillion of them are going to be exchanged for debt that’s already in existence only adds fuel to this fire.

This move by the Fed to print up another trillion comes on the heels of an announcement by the IMF that it plans to issue “Special Drawing Rights” which are nothing more than irredeemable bits of paper that central banks can pretend have value amongst themselves.

The International Monetary Fund is poised to embark on what analysts have described as "global quantitative easing" by printing billions of dollars worth of a global "super-currency" in an unprecedented new effort to address the economic crisis.

Here’s a great explanation posted to the forums a few days back by Machinehead:

Here is one way to look at [Special Drawing Rights or SDRs], via a simple example. Let’s say that you and I, while hanging out at the strip club, exchange million-dollar IOUs scribbled on cocktail napkins. If I can discount your IOU at my bank for a $1 million loan to me, and you can discount my IOU at your bank for a $1 million loan to yourself, then we have jointly created 2 million dollars, in what is essentially a chain-letter scheme.

The vast expansion of international reserves during this decade also resembled a chain-letter scheme. The U.S. trade deficit piled up dollars in China, which became international reserves for China. China then recirculated these dollars to the U.S., providing the expanding volume of debt financing which is essential to keep a Ponzi scheme expanding. There is no numerical limit, other than the economy’s ability to service the debt, to prevent this cycle from endlessly repeating.

In recent months, the drastic shrinkage of the U.S.trade deficit has slowed this runaway transmission belt to a crawl. Reviving trade is going to take years. If one’s objective is to restore the heady 20-percent annual growth of international reserves during the Bubble II years, then new reserves must arise from some source other than expanding trade.

Enter the IMF, with its SDRs. SDRs are acceptable as international reserves, because nearly all countries belong to the IMF club. SDRs can be created out of thin air as derivatives of existing national currencies and then handed out to central banks, in a process exactly like our exchange of cocktail-napkin IOUs. Central banks in turn can exchange SDRs among themselves to settle trade debts, meaning they can buy real goods with these thin-air paper derivatives. And that’s the very definition of inflation — purchasing power created from nothing, with no corresponding increase in investment or production. So all purchasing power gets diluted accordingly.

That sums it up beautifully. The SDRs are nothing more than a derivative currency issued by a bank-like entity that answers to no single government and therefore to none at all.

Together, the IMF and the Federal Reserve have embarked on a joint program to reinflate the world at any price.

I am certain they have the best of intentions and hope to be able to reel all this bogus funny-money back in at just the right moment to preserve whatever economic activity has been spawned by the thin-air bonanza while avoiding overshooting and igniting an inflationary inferno. But history suggests that the chance of this outcome is 0%.

From here, I am expecting several things.

Finally, I am expecting this latest “bold initiative” by the Fed to fail, and fail spectacularly.

More on this later as events develop. Today was a stunner. The game has now shifted to a new set of rules.