In this post, I respond to the recent flurry of activity in print and in blogs about the dollar, US indebtedness, and the risks associated with both.

Mish recently posted a mixed grab-bag entitled Countdown To Dollar Implosion Madness, in which he (very rightly, in my view) took to task various bloggers and other Internet sources that have been peddling rumors of bank holidays and setting specific dates for a dollar implosion.

I don’t like trading in unsourced rumors, either by the mainstream media or by bloggers (as they are very nearly always proven wrong), and I am especially leery of setting dates for future market events.  So kudos to Mish for his efforts to hold bloggers to a higher standard.

However, I took exception to a snippet from a WSJ article by Andrew Batson, entitled Households Start to Rival the Chinese in Treasury Market (originally blogged about by Michael Pettis here), that offered the comforting impression that domestic savings are growing and are possibly sufficient to fund the US government deficit.

Where this article attempted to make its claims on the basis of comparing the Treasury purchases of China to those of US households, I saw arguments that were either inconsistent with the data with which I am familiar or were otherwise somewhat misleading.

For example, we have this:

China is center stage when it comes to fears that buyers will one day spurn U.S. Treasurys. The bond market has been the source of much political theater between the U.S. and China in recent months, with Chinese officials passing up few chances to lecture the U.S. on its profligacy.

But that has obscured an important change: The market for Treasury bonds is now more reliant on U.S. buyers — including the Federal Reserve after its recent buying spree — than the Chinese.

This is technically accurate but leaves out the important fact that, according to the Treasury Department, China was not the most important purchaser of Treasuries over the first six months of the current year (2009), but was a distant third place behind the UK and Japan. 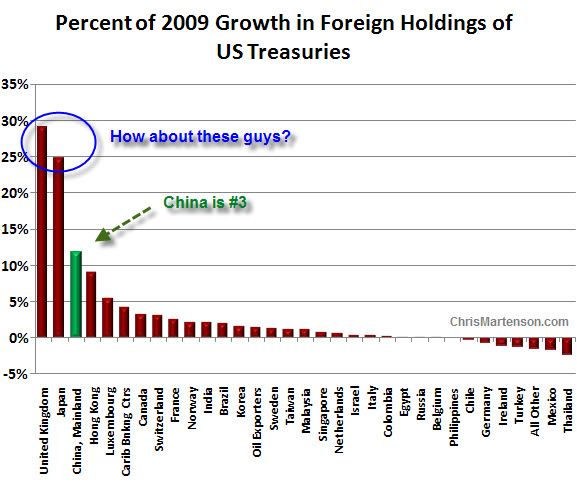 (Source – Data is through June, the latest data available)

While I don’t want to minimize the fact that China has been an important client, currently holding 23% of all foreign-held Treasuries, its recent purchases have certainly not amounted to much, which makes a comparison to them something of a straw-man argument.  Instead, we might want to analyze the total behavior of the Treasury market before drawing conclusions or impressions about how one sub-group of purchasers is faring relative to another.

As an aside, one reason that I suspect the Federal Reserve is reticent to be audited concerns the UK purchases of Treasury bonds. One might wonder how an island nation that is mired in a deep and profound fiscal crisis finds itself in a position to buy so many Treasury bonds.  Where did the money come from?

While part of the answer lies with the fact that the UK banking center often operates as a pass-through for other entities (like Saudi Arabia, for example), it could also be operating on the behalf of other official parties. Like the Federal Reserve, perhaps?  While that is rank speculation, it would certainly be nice to have a simple audit put such nagging worries completely to rest.

Back to the matter at hand.  According to the Federal Reserve, by the end of Q1, US households amassed $450 billion in Treasury issues, increasing by an incredible $377 billion between the 4th quarter of 2008 and the 1st quarter of 2009.  We might note that this is a volatile data series. 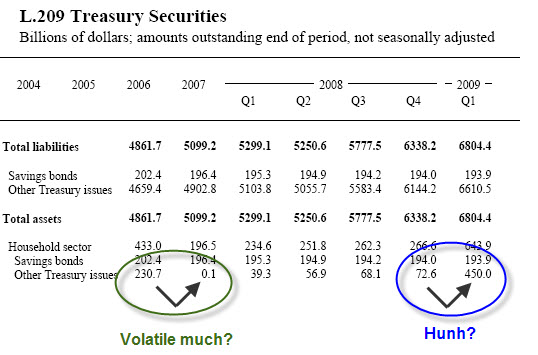 This massive $377 billion increase is so far out of line with any other quarterly data in the series that it strikes me as rather odd.

We might also suspiciously note that $377 billion represents over 93% of total annualized domestic savings for the period in question (so the actual amount of savings for the quarter was only about $100 billion).

Because it strains one’s imagination to envision that nearly the entire proportion of domestic savings went into Treasury securities, even after allowing that people might have pulled money out of the stock market and tucked it into Treasuries during a nasty spring equity sell-off.

But if all that money went into Treasuries, where did the money come from to pay down so much credit card debt and to buy so many houses with cash, as we saw in that same quarter?

I think I will wait for the next release of the data to see if this massive increase was a statistical fluke or the start of a trend.  Given the decrease in household deposits, credit card debt, increasing retail cash flows to mutual funds, and other measures, I strongly suspect that this incredible increase is not the start of a trend.   We’ll see.

But the worst part of the WSJ article was this claim:

The rising budget deficit, which has led to record issuance in recent months, doesn’t necessarily mean the government is becoming more indebted to foreigners.

Well, in fact, it does. A philosophy student might argue that it does not “necessarily” have to be so, but the data we have available is unequivocal on the subject.

Again from the Treasury website, we can analyze the major foreign holders of US Treasuries and develop this chart: 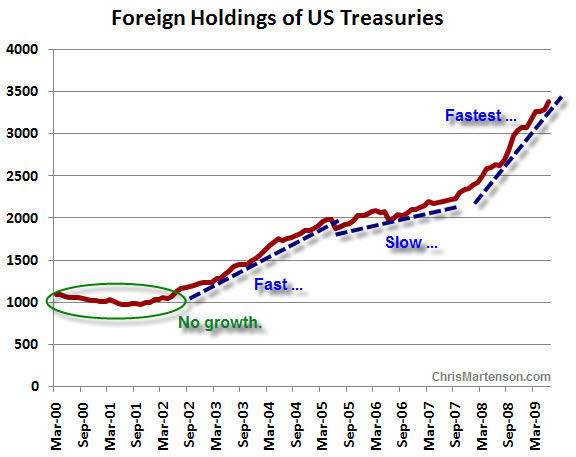 What we see here is that foreign holdings of US Treasuries were dead flat for about a year at the start of the decade, but over the past 18 months they have accumulated into foreign hands at the fastest rate on record.  You might also recall that this is the precise period of time associated with the massive budget deficits that won’t “necessarily mean the government is becoming more indebted to foreigners” – a bizarrely counterintuitive claim.

If the fastest pace of Treasury purchases by foreign holders on record is not a mark of increasing government indebtedness to foreigners, I certainly don’t know what is.

To put this into context, we might also note that where the US government has gone $1 trillion dollars into hock to foreigners over the past 18 months, it took over 350 years to amass the first trillion. 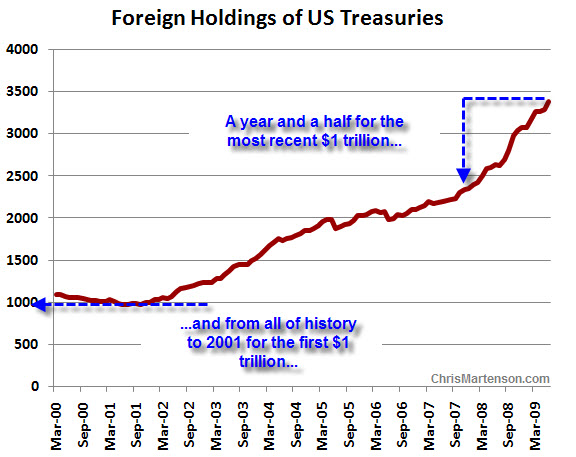 If matching over 350 years of increasing foreign indebtedness over just the past 18 months does not indicate that “the government is becoming more indebted to foreigners,” then I don’t know what does.

Again, this seems very straightforward and not really subject to sort of confusion that was on display in the WSJ article.  While I understand the temptation to engage in the wishful belief that the US can borrow record-shattering amounts of money while not somehow also mortgaging the entire farm, piece by piece, to foreigners, such thinking flies in the face of both common sense and the data.

My conclusion from all this is that the US has a date with a funding crisis and probably an associated dollar crisis, and increasing foreign indebtedness is an absolutely vital component of that pair of risks.  I assume that the record-breaking pace of foreign Treasury accumulation is not sustainable and that it will therefore stop.  Since it does not seem to want to stop for natural or fundamental reasons, I assume it will stop for some other reason(s), possibly abruptly.

As always, trust yourself.

P.S. Where is Japan getting all that money from to buy US Treasuries?  Not from thin air, one hopes!